The 17-year-old won with a score of 98.25 on her final run with China's Jiayu Liu taking silver and United States' Arielle Gold winning bronze.

Kim had already secured gold with her first run score but improved to win by eight-and-a-half points.

She is one of the stars of the Games and a favourite with the home fans due to her South Korean parents.

"It means a lot just being able to do it where my family is from," Kim said after her win which was watched by the biggest crowd so far at Pyeongchang's Phoenix Snow Park.

"There was a lot of pressure, but I'm happy I was able to do it here and do it for the fans and the family.

"I'm so happy I was able to land and being here is so exciting, this has been a dream of mine."

The seven other gold medals on day four

Why are teenagers so good at snowboarding? 17-year-old Red Gerard's gold in the slopestyle was no surprise to those who follow the sport.

How youngsters have started to dominate the slopes

BBC Sport commentator Ed Leigh said we might be looking at "the beginning of a very long reign for the queen of halfpipe snowboarding".

The Californian was the strong favourite ahead of the Games and that status was strengthened when she qualified with a score of 91.50, almost four better than any of her rivals.

The gold is Kim's first Olympic medal at her debut Games. She qualified for the 2014 Games in Sochi but was unable to compete as she was aged just 13.

The teenager was the last to take to the course in the first run and immediately moved top of the standings with a score of 93.75.

She fell on her second run but no rider was able to better her initial effort meaning the American was already guaranteed gold before her final run.

Kim even took to Twitter during the competition to discuss her breakfast.

Her US team-mate and snowboard legend Shaun White qualified first in the men's halfpipe ahead of the final on Wednesday at 01:30 GMT.

Kim's parents emigrated from South Korea to the US in 1982 and she first tried the sport aged four.

Despite her age she has dominated the sport in recent years, becoming the youngest person to win three X Games gold medals.

At just 15 she became the first female snowboarder to land back-to-back 1080 degree spins in competition, a trick she repeated on her third run in Pyeongchang.

The teenager has a large following on social media and a tweet between her qualification runs went viral as she expressed her need for ice cream.

In her news conference following her win Kim said "I'm so hungry. I really want a burger or fries or maybe some pizza".

Thousands of Twitter users congratulated her following the win, causing her name to trend on the network.

There was more than double the number of tweets including her name in the hours after her win than those featuring her compatriots and fellow snowboard gold medal winners Red Gerard and Jamie Anderson combined after their wins earlier in the Games. 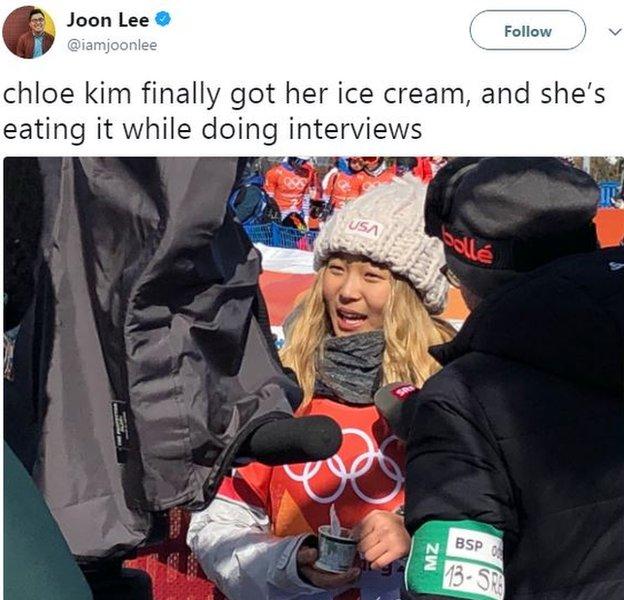 Other news lines from day four