The United States beat Canada 3-2 in a sudden-death shootout to win Winter Olympics gold in the women's ice hockey for the first time in 20 years.

The scores were level at 2-2 after five penalty shots each, but USA's Jocelyne Lamoureux-Davidson scored past Shannon Szabados before Maddie Rooney saved from Canada's Meghan Agosta.

Canada won gold at the previous four Olympics, including victories over USA in the 2002, 2010 and 2014 finals.

The game had ended 2-2 after overtime.

Hillary Knight opened the scoring for USA but Haley Irwin and Marie-Philip Poulin put Canada ahead before Monique Lamoureux-Morando took the match into overtime in Pyeongchang.

Lamoureux-Davidson said she had repeatedly practised the move in which she feinted to the left before taking the puck round Szabados to the right to score the winning penalty-shot.

"I've done that thousands of times around tyres just set out on open ice," she said. "It's called 'Oops, I did it again' and I'm just thrilled beyond words.

"I've butchered it a thousand times, ran into tyres, tripped over tyres just working on my hands. I'm just glad it worked out this time.

"This victory is special and it's going to give us an even bigger platform to make a bigger difference."

Twin sister Lamoureux-Morando added: "It's a move that our coach Peter Elander worked on with us over the last four years, not just on the goalie, but against defenders.

"We've screwed it up plenty of times, but she pulled the perfect time to pull it off."

What happened on day 13?

Medals are like buses - you wait 26 years for one and then two come along on the same day.

That was the case for New Zealand, as Zoi Sadowski-Synnott claimed women's big air bronze before Nico Porteous won bronze in the men's ski halfpipe.

Porteous, aged 16 years and 91 days, is the youngest Kiwi to win an Olympic medal, while Sadowski-Synnoty is the second youngest at 16 years and 353 days.

"She's regarded as one of the all-time great winter sports athletes of New Zealand, so we all see that as an inspiration," Porteous said.

"I would say we broke the curse today. I was extremely nervous - I actually vomited three times this morning." 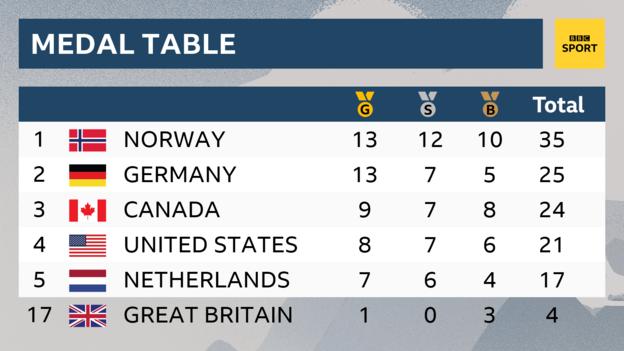