The opening ceremony of the 2018 Winter Olympics was mesmerising, high-tech, and, at times, poignant.

There were so many stand-out moments but we narrowed it down to six of the moments you will be talking about.

Her presence at the Games is being seen as a sign that Kim Jong-un is serious about improving ties with the South. 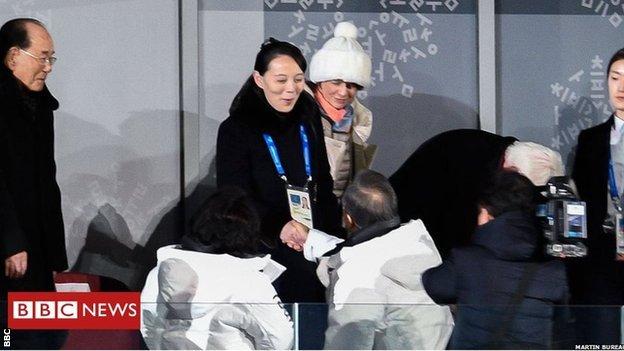 2. Russians - but not Russia

After an amazingly slick drumming section performed by an all-female group, who then formed the South Korean flag, the parade of nations began featuring plenty of colourful outfits and excited athletes.

One notable absence from the parade was Russia who are banned from the Games, and the forthcoming Winter Paralympics, as a consequence of the 2016 McLaren report which found 1,000 of the country's sportspeople benefitted from state-sponsored doping.

However, there were 169 Russians who have been cleared to compete as neutral athletes under the banner of 'Olympic athletes from Russia'.

They will fly the Olympic flag rather than the Russian one and wore neutral grey and white uniforms during the opening ceremony. 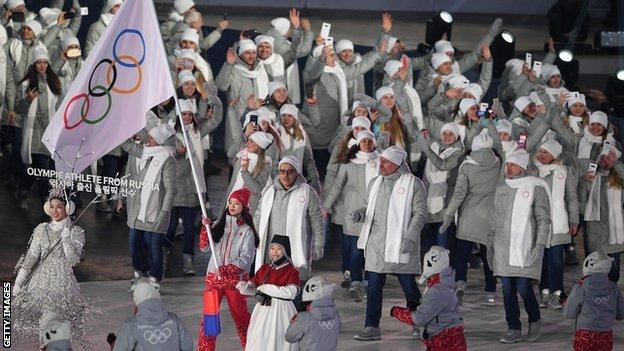 3. North and South Korea marched as one nation

In an emotional and historical moment, the delegations from North and South Korea marched together under the national flag of unification.

The message of unity and peace was a theme throughout the ceremony, with International Olympic Committee president Thomas Bach saying: "We are stronger than all the forces that want to divide us."

There was also a rendition of John Lennon's 'Imagine' - the ultimate peace anthem.

4. The return of the topless Tongan

It may have been -6C but that didn't stop taekwondo-fighter-turned-cross-country-skier Pita Taufatofua recreate the incredible moment from Rio 2016 where he emerged, oiled up and topless, waving the Tongan flag.

Social media timelines around the world went into meltdown.

5. The Olympic rings were formed by ACTUAL drones

It might be hard to top the goosebump-inducing moment the Olympic rings created a shower of sparks at London 2012, but Pyeongchang 2018 certainly gave it a good go.

In typically high-tech South Korean style, they were formed in the night sky by 1,218 drones.

The amazing feat was a Guinness World Record for drones used in a performance.

6. The lighting of the cauldron

The honour of lighting the Olympic flame was handed to Yuna Kim, who won Olympic figure skating gold in 2010.

The South Korean icon performed on a platform at the top of a slope above the stadium, before being handed the torch.

She then lit the flame as 30 fire rings ascended towards the white space-age looking cauldron.

Coming up on Saturday - day one

12:10-14:30: Olympic history will be made with a first unified Korean team taking on Switzerland in the women's ice hockey.

Five golds up for grabs