Eve Muirhead's team produced an excellent display to seal a 8-6 win over in-form Japan in their penultimate group match.

They are joint-third in the table with an identical record to Japan - five wins and three defeats.

The men are joint second in their table after skip Kyle Smith led them to a stunning 10-3 win over Norway.

He described the victory as his team's "best performance so far".

"It feels like we're getting better with each game. That's three wins back-to-back so we know a win over the USA will see us into the semi-finals," he told BBC Sport.

Given the standings, the worst case scenario for the men now is that they have to face a play-off.

Smith's rink controlled the match from the outset, as they took three from the first end before stealing a single in the second.

Norway got two back in the third but it was only a temporary setback as a beautifully-judged final shot in the fourth from Smith put Team GB 6-2 up.

Having limited the 2010 silver medallists to a single in the fifth, Team GB added to their emphatic halfway lead with another three in the sixth.

At 9-3 the match looked out of sight for the off-form Norwegians and they conceded after seven ends as Team GB stole another single to round off a terrific display and claim their fifth win in eight games.

Their final round-robin contest is against the United States on Wednesday.

That has been Britain's best performance of the games so far, not just in terms of the score but in the manner of their performance.

'We're going in the right direction'

Muirhead's rink recorded a "crucial" 8-6 win over Japan to move to within touching distance of the curling semi finals.

Victory over the reigning Olympic champions Canada will guarantee their place in the last four.

"As a team I definitely feel like we're going in the right direction," Muirhead told BBC Sport after the win.

"I know if we do win [against Canada] we're in the semi-finals and that's all that's been in my mind these last few games."

Muirhead had to use all her experience to recover from a shaky start in this match, with just two singles to show for their opening ends with the hammer, compared to an easy three for Japan in the second.

But the Scots skip stole one in the fourth before a phenomenal three against the hammer in the sixth to really turn the match in Team GB's favour.

Japan weren't finished there and took two back to make it 6-5 after seven. But two more singles took Team GB out of sight, with Japan managing just one in the final end.

Analysis - 'This is a huge opportunity'

Everything is in our hands. The girls showed real professionalism today. In the second half they came out and performed really well.

We have a huge opportunity to get ourselves to the play-offs and knock out Canada too. The girls give everybody due respect - as you heard in their interviews.

The old rivalry between Great Britain and Canada will show its best tomorrow. I'm really looking forward to it.

Canada are not playing their best at the moment. They are really struggling so if we can continue our good form, it will be great.

Every Canadian team that comes out here is expected to come home with an Olympic gold medal and that is a lot of pressure to take on. 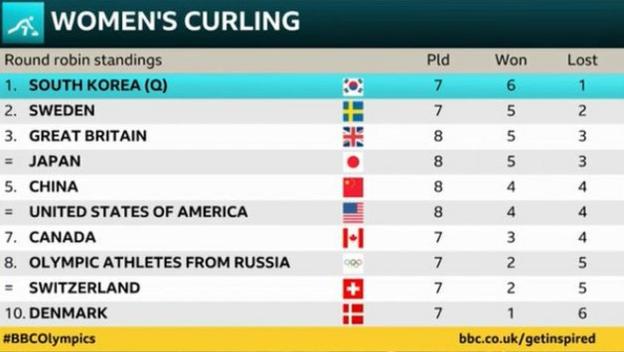