The United States men's ice hockey team beat Slovakia 5-1 to reach the quarter-finals at the Winter Olympics in Pyeongchang.

They will face the Czech Republic in the last eight on Wednesday.

"We came in with the intention of being confident, not just being worried about going home," said Donato.

"I think we just played confident, and the chemistry is continuing to grow, and it's finally meshing."

Donato is now tied in Olympic scoring with his father Ted, a former Boston Bruin player, who had four goals and three assists in 1992 at the Games in Albertville.

"I saw some videos of him in between periods, celebrating. I've never seen him smile like that before," the younger Donato said. "It was good to see that."

Meanwhile, Norway reached the quarter-finals for the first time after Alexander Bonsaksen's goal in overtime secured a 2-1 victory against Slovenia.

Winless in Pyeongchang before Tuesday, Norway overcame a one-goal deficit to force the sudden-death period and went on to register their first Olympic hockey win since they hosted the Games in 1994.

They will face the Olympic Athletes from Russia team, one of the favourites for the title, in the last eight on Wednesday.

Canada face Finland and Germany play Sweden in the other men's quarter-finals.

Korea's unified women's ice hockey team ended their Olympics with a 6-1 defeat by Sweden, but still received a standing ovation from the crowd.

The combined team of South and North Korean players was only assembled a few weeks before the Games began.

They conceded 28 goals and scored twice in five games during the preliminary rounds, but were seen as part of a show of unity between the neighbouring nations after months of tension in the Korean peninsula.

The home support roared when the South Korean Han Soo-jin scored to tie the game in the first period, before the Swedes ran out easy winners.

"All the sacrifices our players and team have been making, it was worth it," said Korea's Canadian head coach Sarah Murray.

"The chemistry and the message that our players were able to send, that sports transcends the barriers, they did a great job."

Japanese ski jump legend Noriaki Kasai missed out on a medal on his record eighth appearance at a Winter Olympics in Pyeongchang, but insists he will make the podium at the age of 49 in four years' time.

Kasai made his Olympic debut at Albertville in 1992 and collected a team silver at Lillehammer in 1994, before adding a large hill silver and team bronze 20 years later at Sochi.

The 45-year-old never threatened for a medal in South Korea, finishing sixth in the team competition, but has already set his sights on Beijing 2022.

"It was nice to be able to set a record of eight appearances," said Kasai.

"I'm not saying I want to be there, I'm saying I definitely will compete in Beijing. I was able to jump in front of my family here, next time I will win a medal in front of them.

"I would like to aim for 10 Olympic Games eventually. I'm not done yet." 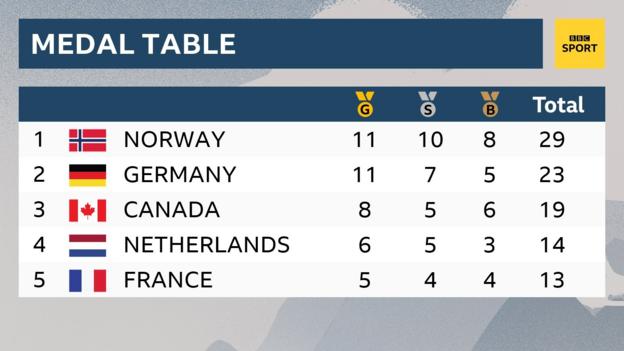 Other news from day 11