Great Britain's women curlers will play for a Winter Olympic bronze medal after a 10-5 semi-final loss to Sweden in Pyeongchang.

Victory would mean GB record their best medal haul by surpassing the four won at Sochi 2014 and Chamonix 1924.

Eve Muirhead's team will face Japan, who lost to hosts South Korea in the other semi, at 11:05 GMT on Saturday.

"We still have a medal to play for, so we'll give it our all," Scot Muirhead, 27, told BBC Sport.

"We gave it our all and the Swedish girls were on fire. I missed a couple of key draws and you can't afford to do that.

"We're absolutely gutted. I know it will take time to get over that loss.

"We have trained hard for the last three or four years, but we were outplayed."

UK Sport predicted a total of between four and 10 GB medals at the Games, but set a target of at least five after more than doubling funding for this Olympic and Paralympic cycle to more than £32m.

Skelton sliders Lizzy Yarnold, Laura Deas and Dom Parsons and slopestyle skier Izzy Atkin have won medals, while the women's curling team were regarded as one of the best British hopes after claiming bronze in Sochi four years ago.

Although they lost to Sochi silver medallists Sweden in the group stage in Pyeongchang, Muirhead's rink went into the semi-final on the back of three successive victories.

But they found themselves 2-0 down after two ends and, despite a superb shot from Muirhead to level at 3-3 in the fifth, Sweden built a five-stone advantage.

Three of those scores came in the seventh end, when Britain had the hammer, and, after Muirhead reduced the deficit to 8-5 in the eighth, Sweden added two in the ninth to secure their place in the final.

"As a team we are a very strong unit. We will support each other as much as we can.

"We had a good opportunity, but we were on the back foot from the start and it was hard to grind it back."

Muirhead, vice-skip Anna Sloan, Vicki Adams and Lauren Gray face a Japan side who lost after an extra end in a dramatic semi.

Adams said: "We have been in this position before, so we will rally around each other, work really hard and focus on the game."

We saw Sweden play a terrific game. They didn't crack under the pressure and were solid until the end.

Unfortunately for Great Britain, it didn't work in their favour. That will be a tough one for the ladies.

Meanwhile, GB's Emily Sarsfield failed to qualify from the quarter-finals of the Winter Olympics women's ski cross, despite making it through the heats when her Canadian opponent crashed.

Competing at her first Winter Games, the 34-year-old has not received any UK Sport funding and has been self-coached for all but the past six months of her 12 years on the ski circuit.

"I have funded it by setting up a ski school. I have worked multiple jobs through the summer," she said.

"It's a different route to my peers but it just makes me that little bit more hungry." 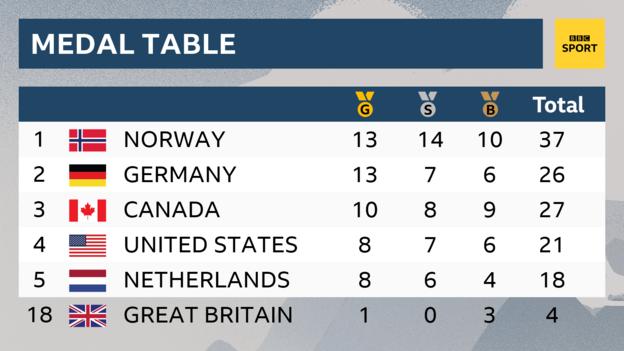