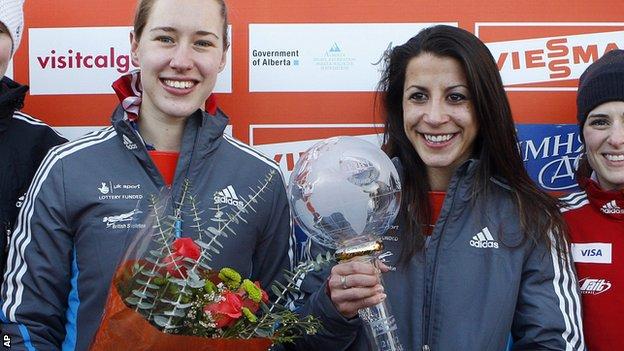 Britain's Shelley Rudman is the skeleton World Cup champion after finishing third in the final race of the season.

The race in Calgary, Canada, was won by team-mate Lizzy Yarnold but Rudman secured enough points to take her first overall title.

She told BBC Sport: "I feel so proud."

Out of the eight races this season, Rudman had claimed five podiums, including winning in Koenigssee, in Germany.

The 30-year-old said: "For the past three years, I've been second in the World Cup series and each time it's been down to the final race to decide the overall winner.

"This season all I had to do was finish ahead of Marion Thees in Calgary, who was seven points in front of me."

Rudman was second after the first run, and her second run was the sixth fastest but the combined time meant she was joint third in the race, securing 200 World Cup points.

"It's what I've been after since starting the sport," Rudman added.

"I'm so, so happy. To me, the overall World Cup title is the most prestigious title to win in our sport."

She emulates her partner Kristan Bromley, who won the World Cup title twice, in 2004 and 2008 and the couple's four-year-old daughter Ella was at the track to watch the race.

"Ella lasted the whole race and celebrated until 10pm. She had pictures on the podium with me. She's so excited mummy won," Rudman said.

And she dedicated her win to her parents after her father, Jack, suffered a brain haemorrhage in February last year.

"It has been a really difficult year for us. He's doing great and fully fit, and I know the win will make mum and dad over the moon."

Britain's success in skeleton over the past decade encompasses Olympic medals at each of the 2002, 2006 and 2010 Winter Games in addition to World Cup champions.

Along with the rivalry between Rudman and Olympic gold medallist Amy Williams, the win in Canada gives 23-year-old Junior world champion Yarnold her second World Cup race win in only four starts.