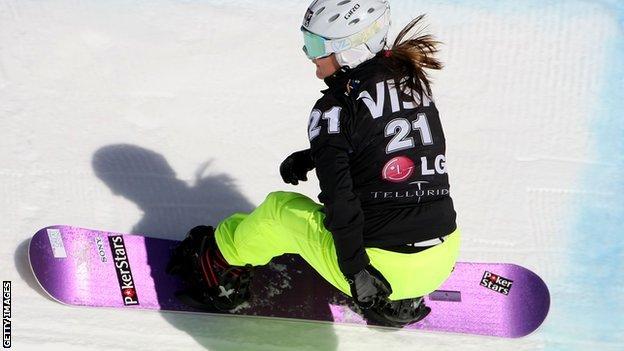 British number one Zoe Gillings finished sixth at the penultimate round of the boarder-cross World Cup in Valmalenco on Wednesday.

The Isle of Man snowboarder will not go into Friday's final round ranked seventh in the overall standings.

"It went really well and it's great to reach another final," she said.

The 26-year-old has now reached the final at four of the six rounds.

"My confidence is really high and I really feel like I am improving with every round. My technique and body positioning in the jumps has developed a lot this season.

Gillings fell during a training run on Monday but was not injured.

Dominique Maltais leads the overall standings going into the final round ahead of Ricker and Jekova, while Gillings is just 10 points behind sixth-placed Deborah Anthonioz.

The Manx snowboarder added: "I have spent three days learning the course now so I am really confident that I can catch Deborah. It would be great to finish the season ranked sixth in the world."

The format for the World Cup event has taken a dramatic change this year, with 24 athletes now qualifying for the heats instead of 16, and each heat featuring six athletes instead of four.