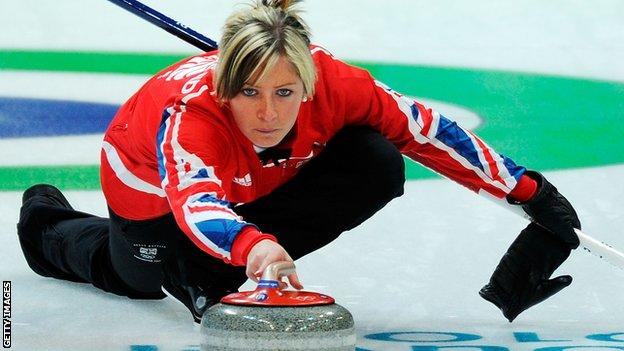 Scotland finished the round-robin stage of the World Women's Curling Championship with a pair of wins but fell short of making the play-offs.

Eve Muirhead's rink beat Italy 9-8 and rounded off their participation with a 9-3 defeat of the hosts, Canada.

Scotland's record of six wins and five defeats put them sixth in the table, some way behind Sweden, Switzerland and Korea's eight wins and three losses.

That trio plus Canada or United States will contest the Lethbridge play-offs.

The two North American teams were tied for fourth place and go head-to-head to determine who will play Korea.

Sweden and Switzerland meet in the other play-off.

A 3-2 defeat by Sweden looked to have ended the young Scots' hopes after Muirhead's rink had beaten Czech Republic and China on Wednesday.

Scotland, the European champions, were tipped to win the tournament and opened with a defeat of Russia, but they suffered an extra-end loss to Germany before beating the Danes over the weekend.

However, consecutive defeats to Korea, United States and Switzerland saw them slide down the standings.

Muirhead's rink took an extra end to beat Italy 9-8 and they knew they were already out of the medal reckoning before they came onto the ice to face Canada.

In one of the team's best performances of the week, the skip scored three in the seventh end for an 8-3 lead, and put her 9-3 victory beyond doubt.

Some comfort for the Scots is that, based on cumulative points earned for their finishes at the 2012 and 2013 Women's World Championships, the top seven countries will gain entry to the 2014 Olympic Winter Games in Sochi, Russia.

In addition, two other nations will have the chance to qualify for Sochi at the new World Curling Federation Olympic Qualifying Event to be held in December 2013.