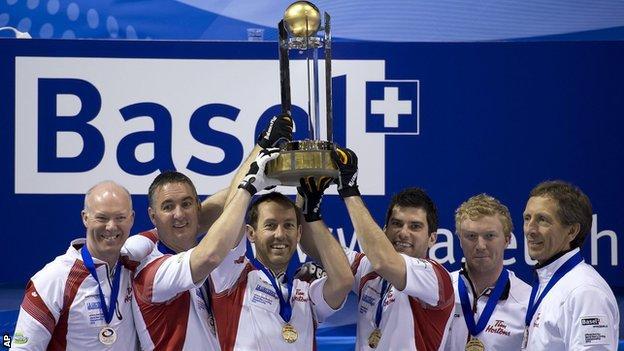 Scotland lost to Canada in the final of the World Men's Curling Championship for the second year running.

Tom Brewster's rink lost 8-7, the Canadians having previously beaten Scotland in the round-robin and the play-off round.

Glenn Howard required an extra end to complete the hat-trick of wins in Basel, Switzerland.

Earlier, Sweden, beaten by Scotland in the semi-final, claimed the bronze medal with a 9-8 win over Norway.

Howard delivered a well-judged draw-shot for the vital winning point, the Scots having fought back from 3-1 and then 6-4 to level at 7-7 ahead of the extra end.

"I won my first world title 25 years ago and this one's just as special, maybe more so," said Howard after his fourth tournament win.

"It just feels great to win. This win feels special; they get more special because I don't think I'll be getting back [to the World Championship].

"I can't give enough praise to my team, they've been fantastic all year. We hung in there."

Brewster admitted he was "gutted" and added: "I thought we were the better team, I really did.

"I thought we played some great curling, an inch more curl on that shot in the 10th and we're there.

"Twelve months ago, we were in the same position and we're miles better than last year.

"We've made big improvements since last year on fitness and sweeping and we've just got more experience.

"Our team played great here - what an effort. We've had a strong week here and we've got a big future."