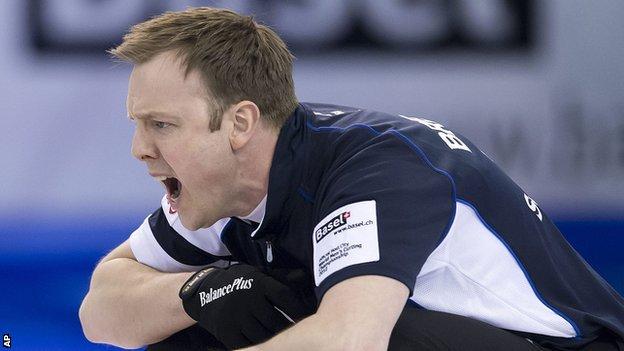 Losing out to Canada in the World Men's Curling Championship final for the second year running has only made Tom Brewster more determined to succeed.

"Canada are the team to beat and to run them as close as we did was fantastic," Brewster told BBC Scotland.

"We'll just work even harder this year to A: get back to the world championships and B: try and get that one game further."

Prior to Sunday's final showdown, Canada's Glenn Howard had got the better of Brewster in the round-robin phase and the page 1v 2 play-off, again after an extra end.

But Brewster was full of praise for rink-mates Greg Drummond, Scott Andrews, Michael Goodfellow and David Edwards and believes they can overcome the sport's dominant nation next time.

"Over the week we were pretty solid," explained Brewster on his arrival home at Aberdeen airport.

"We had two bad games over the 14 that we played.

"I'm really pleased for the guys. The amount of work we put in, training and in the gym, it really paid off.

"The progress we've made since losing the final last year is massive, so if we can keep improving again for another 12 months, we'll be in a good place.

"I'm proud of the silver medal but we were so close to the gold.

"Canada were the favourites but I think, on the day, we played the better. We just didn't get that wee bit of luck."

Howard's triumph was his fourth world title - the first having come 25 years ago - and his nation's 34th overall.

"You have to learn to play these teams and be able to beat them.

"We'll take a few weeks of well earned rest then discuss where we go from here."