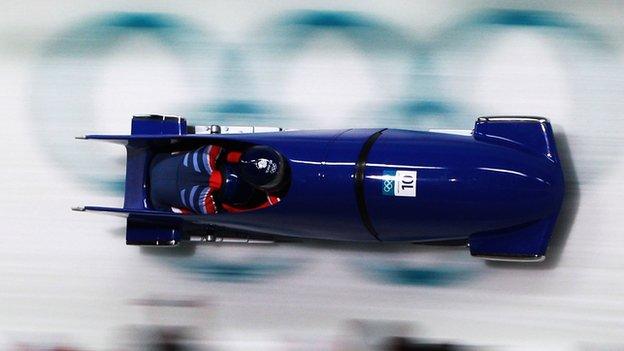 He tested positive for clenbuterol in February and was provisionally suspended pending a personal hearing.

I would be extremely interested to know Simon's reasons for doing this.

Carty's backdated ban will end in April 2014 but he will miss the Winter Olympics in Sochi, Russia.

"He knows he has let not only himself down but also the programme of GB Bobsleigh," said performance director Gary Anderson.

"It's disappointing when you learn that an athlete with the capabilities of Simon has fallen at this hurdle.

"I would be extremely interested to know Simon's reasons for doing this because he was an excellent athlete and showed great athleticism. Personally, I don't think he needed to."

The 23-year-old Carty, who used to play rugby sevens, was recruited as part of the Talent ID programme in conjunction with UK Sport in 2010.

The brakeman was part of the GB America's Cup campaign last year, which is the level below World Cup, and was considered to be a strong candidate for a place in one of the GB sledges for Sochi, where the Winter Games will be held between 7-23 February in 2014.

Clenbuterol is a powerful drug used to treat asthma, but it can also help build up lean muscle mass and burn off fat.

Cyclist Alberto Contador was stripped of his 2010 Tour de France and 2011 Giro d'Italia victories for testing positive for the substance in 2010.

Anderson said Carty was "extremely remorseful" but added that he was "going to get caught" after choosing to take a banned substance.

"He was given a very fair hearing from UK Anti-doping and he has admitted the offence and is extremely remorseful," said Anderson. "He is showing quite a lot of concern for his team-mates and the programme."

UK Anti-Doping chief executive Andy Parkinson added: "Athletes are responsible for anything found in their system and are subject to testing at any time.

"UK Anti-Doping operates a robust, intelligence led, testing programme 365 days a year. Athletes can be tested anywhere, whether in or out-of-competition, and must therefore exercise extreme caution over what they put into their body."