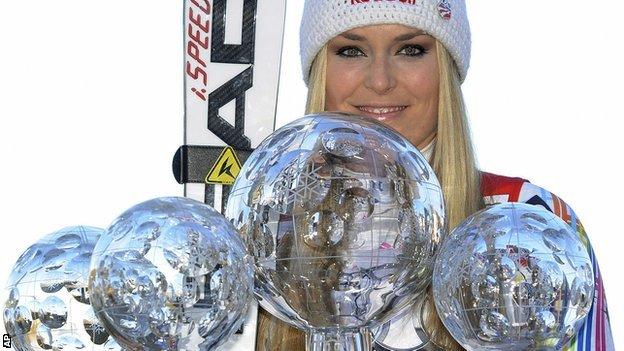 Lindsey Vonn's request to compete in a men's World Cup downhill ski race has been rejected by the International Ski Federation (FIS).

The 27-year-old, the Olympic downhill champion, wanted to enter the men's race at Lake Louise in Canada on 24 November, six days before the women race on the same course.

The FIS ruled "one gender is not entitled to participate in races of the other", but said Vonn can request to be a forerunner, whose job it is to test the course before races.

If America's Vonn were to be a forerunner, she would not be allowed to participate in the women's event.

The US Ski and Snowboard Association (USSA) petitioned the FIS council to consider her request.

"We're disappointed that the FIS Council did not support the proposal but also respect its direction," said USSA president and CEO Bill Marolt, who is also a member of the FIS council.

"Lindsey Vonn is a great champion in our sport and we have always respected her interests in this new challenge."

Alpine Canada president Max Gartner said in a statement he was disappointed with the governing body's decision.

"I saw it as a great opportunity to raise the profile of the sport by attracting interest from people who do not normally follow ski racing, particularly in North America," he said.

"It would have provided a great platform to showcase our sport and the amazing athletic performances of our athletes.

"Lindsey has achieved many milestones in ladies' ski racing. It would have been interesting to see how she stacked up against the best male racers in the world.

"Lake Louise is the perfect venue to have that comparison because Lindsey has as much experience on the mountain as many of the men have had. I hope Lindsey gets a chance to fulfill her dream at a later date."

Vonn, a four-time overall World Cup champion, had previously told the New York Times: "I'd like to have one chance in my life to race against them.

"Annika Sorenstam did it in golf and paved the way for women. I'm not asking for World Cup points. I just want the chance to compete."

Vonn has won the women's Lake Louise downhill nine times in the past 11 races and believes she could finish in the top 30 in the men's race.

"There are some commentators who think that I would be far outside of the men," Vonn added. "Everyone's entitled to their opinion, but I'd like the chance to compete against them and see where I stand. I'd definitely like to be inside the points, in the top 30."