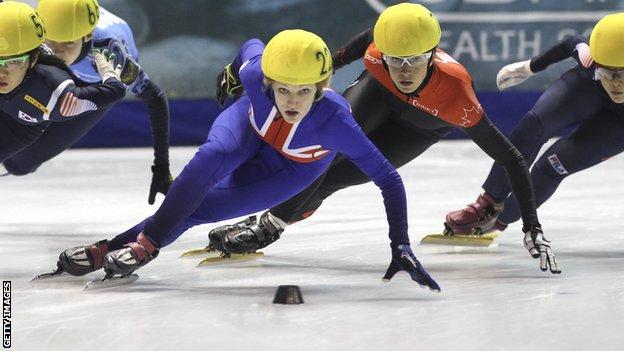 The 22-year-old Scot claimed silver in the 1,000m at the Montreal race, finishing behind Canada's Valerie Maltais.

She said: "Montreal's been challenging after racing last weekend. I was really tired and it was hard to re-motivate myself for round two, but I did believe I could do it.

"Last year I didn't even get into two finals at back to back World Cups, so it shows I'm mentally stronger. I'm pleased with another silver, and it's been a good start to the season."

The Great Britain men's team finished a creditable fourth in the 5,000m relay in Canada.

GB performance director Stuart Horsepool said: "The men did well to reach the A final of the relay. Unfortunately they just couldn't quite keep on the pace and had to settle for fourth place, which is still very good on a world level.

"Across the board we had a lot more people in finals, but we were a little disappointed not to get more medals.

"As with all short track competitions, it's about learning to develop racing skills and learning from each event. The skaters will now go home for a rest, and we can work on what they've learnt from these two stages in Canada, so hopefully we can go to Asia next month be challenging for more medals again."

The next World Cup meeting takes place in Nagoya, Japan, at the end of November.