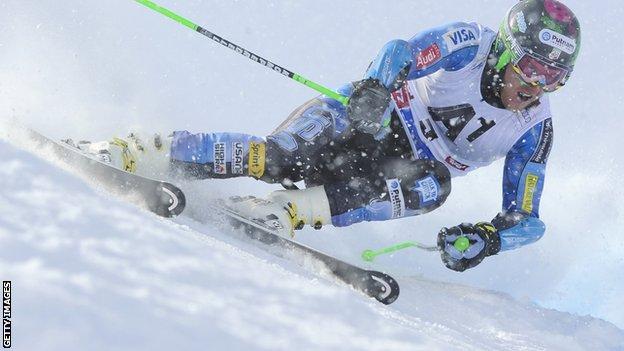 The American's winning margin of 2.75 seconds in Soelden, Austria, was the largest in a men's World Cup giant slalom since the 1981-82 season.

The use of longer, stiffer skis this season had been questioned by the 2011 world champion.

"After being so critical, I knew I had to do well not to lose face, so to speak" said Ligety.

"My skis were running really well today, we have been working hard on this and this is good for the confidence," added Ligety, who finished ahead of Italy's Manfred Moelgg in second place and Marcel Hirscher of Austria, last season's World Cup winner, in third.

"Now we have to check how the new skis will behave in other conditions," Ligety said after the event, which took place during heavy snowfalls.

The 2006 Olympic combined champion was one of a number of skiers who campaigned against the International Ski Federation's decision to change skis, which it said was for safety reasons.

The largest-ever winning margin in the event was 4.06 seconds for Sweden's Ingemar Stenmark in 1979.

The first giant slalom of the women's season was won by Slovenian world champion Tina Maze on Saturday, with Austria's Kathrin Zettel and Stefanie Koehle taking the other podium places.