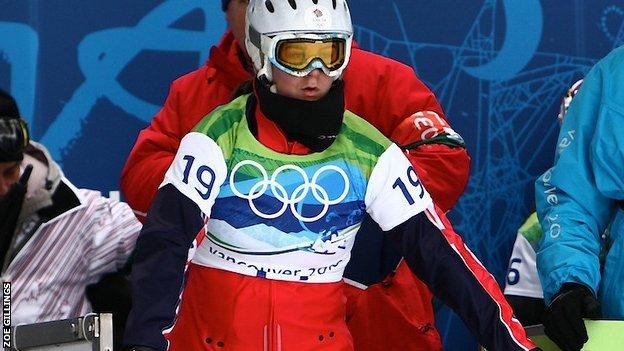 Britain's number one snowboarder Zoe Gillings has said she is already feeling the benefits from her re-instated funding from UK Sport.

The collapse of SnowsportGB prior to the 2010 Winter Olympics had meant she had to fund her own programme.

But in March, 27-year-old Gillings, who is ranked sixth in the world, was told she would receive podium funding towards the 2014 Winter Olympics.

She said: "The funding has been a massive help. It's been awesome."

Gillings, who finished eighth in the snowboard cross at the Vancouver Winter Olympics, continued: "When I found out the UK Sport funding was cancelled, I hit rock bottom.

"I knew it wasn't my results as I'd placed eighth at the Olympics, seventh at the World Championships and third at the World Cup finals so I just didn't know what to do.

"A lot of work has been done over the last six months between UK Sport and British Ski and Snowboard, for which I am extremely grateful."

The Isle of Man snowboarder will start her pre-Olympic season at the Austrian World Cup in Montafon next month.

Thanks to the funding, she has undergone intensive winter training in Leeds and spent six weeks training at Hintertux in Austria. Last season, due to financial pressures, she did not train on snow before her first race.

She also now has access to a performance director, a nutritionist, strength and conditioning coaches and a physiotherapist.

"They are some of the best people in the business and I couldn't realistically compete for an Olympic medal without them," she says.

"I've competed at World Cup competitions for several years but this is the first time I've had such a professional programme.

"Last year was one of the best of my career, so I'm really looking forward to this pre-Olympic season during which qualifications for the Sochi 2014 Olympics will take place.

"The governing body [British Ski and Snowboard] and especially my performance director Paddy [Mortimer] have been awesome."

The first World Cup event of the season will be held in Austria on 6 December followed by a second event in the USA the following week.