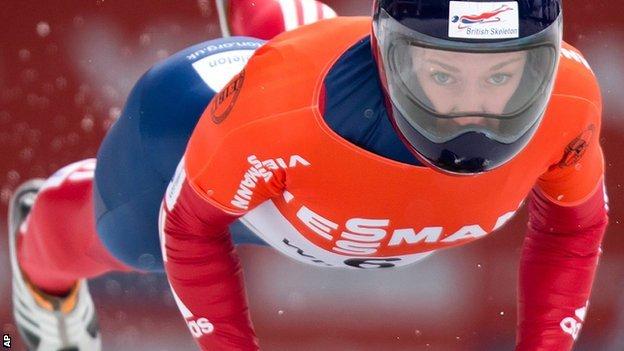 Yarnold, 24, was seventh after her first run of 55.70 seconds but moved up four places following the second run, which she completed in 55.47.

Yarnold, second in Utah last week, is fourth in the overall rankings.

World junior champion Yarnold suffered a blackout in training earlier in the week and could only complete half of her practice runs on the course.

Thees is top of the overall standings, while Rudman, who won the World Cup title in 2011-12, is eighth with Creighton 11th.

In the men's event Kristan Bromley recorded his best result of the season, finishing sixth on the track used in the 2010 Winter Olympics.

In bobsleigh, Britain's Paula Walker secured a third top 10 placing of the season and John Jackson's excellent start to the season continued with a fifth place in the four-man event, meaning the British team are now up to fourth in the rankings.

The north American leg of the season has now been completed and the bob and skeleton teams head to Europe for the fourth World Cup race out of nine in Winterberg, Germany, from 7-9 December.