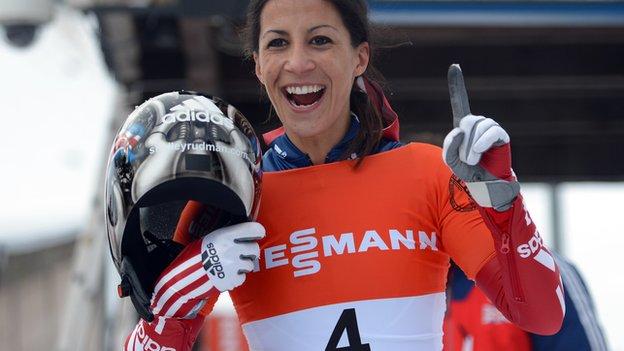 Britain's Shelley Rudman stormed to gold in the World Cup skeleton race in Winterberg in Germany, setting a new track record as she won by almost a second from her nearest rival.

It was the biggest winning margin in a women's World Cup race since 2003 and was Rudman's first win of the season.

Rudman broke the record in the first of two runs with a time of 58.06 seconds.

A steady second run saw her record a combined time of 1:56.30 and easily hold off Germany's Anja Huber and Noelle Pikus-Pace of the United States.

Rudman, the current overall champion and 2006 Olympic silver medallist, tweeted: "Just won the Winterberg World cup and set a new track record by half a second!"

Yarnold and Rudman have won two of the first four World Cup races this season.

In short-track speed skating, Elise Christie, continued her excellent season with a bronze medal in the first of two 1000m races at the World Cup in Shanghai. The Scot was knocked out of the second race at the quarter-final stage but still has a healthy lead at the top of the rankings.

The men's 5000m relay team of, Paul Stanley, Jon Eley, Richard Shoebridge and Jack Whelbourne finished fourth having made the A final.

Zoe Gillings came fifth in the snowboard cross at Montafon in Austria, the second World Cup race of the season - just missing out on a place in the four-person final. She won the B final instead and tweeted afterwards: "Just finished 5th at Montafon World Cup in Austria, was in place for final but silly mistake put me into small final."

In women's bobsleigh, Paula Walker and Gillian Cooke crashed during training but came back to secure 10th spot in the race in Winterberg. Walker said: "Although we came 10th, I'm still kind of happy. This has never ever been a great track for me so top 10 in the world, I'll take that."

In alpine skiing, Chemmy Alcott continued her comeback from a career-threatening injury with 34th place in the St Moritz super-G but she was less than three seconds behind winner Lindsey Vonn of the United States.

She tweeted: "After a big crash in warm up am proud of how I skied. Shame my top split let me down. Was 16th then 12th on bottom."