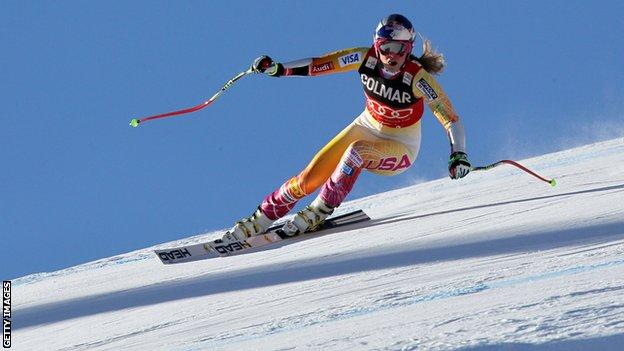 Ski Sunday presenters Graham Bell and Ed Leigh will be on our screens for the 35th season of the winter sports programme.

They took a time-out during filming in St Anton, Austria, to answer your questions on skiing, snowboarding... and the relative merits of the medieval torture rack and dual snowboards.

All were sent via Twitter using #BBCSkiSunday - thanks to everybody who submitted a question.

George ‏(@therealgfox) "Can you please let me know when you are retiring? I would like your job please!"

Graham: "Not any time soon! I still enjoy doing the course runs, they are still a challenge and a risk I enjoy."

Ed: "That decision might not be up to Graham, as the International Ski Federation might ban him from the course guides for being too old!"

Graham: "I've mainly been following it on Twitter. GB has some good skiers and the Paralympics will be very interesting and something I'm really looking forward to."

Ed: "If they can get close to replicating some of the success of the London Paralympics, it will be amazing."

Pete Campbell ‏@fatbobfilms "Will @snowedleigh have another crack at the UK Air Guitar Championships after a 3 year winning streak 1999-2001?

Ed: "It is true I am a former air guitar champ but I'm afraid I've had to retire my alter ago. I've dislocated both of my collarbones and that is not conducive to three minutes of headbanging and air guitar."

Hamish Duncan ‏(@hambourine) "What's the weirdest lift you've ever been on?"

Graham: In Portillo in Chile there is a very steep lift, which is basically holding onto a rope and you go from standing stationary to being catapulted up the mountain. That's quite difficult to ride! The other was the sideways chairlift in the Cairngorms when I was growing up."

Ed: "I'm going to go for the poshest which are in Kitzbuehel and they are blood red leather seats, which are heated."

Graham: "In Finland, there is a lift which has a sauna in it."

Graham Stenson (‏@GrahamStenson) "Why is #BBCSkiSunday only on for 6 episodes? Why not entire race reason?"

Graham: "Starting after Christmas is not something we want either. It's down to staffing I think. We'll have another word with our bosses!"

Stewart Walsh ‏(@StewyW_Cycling) "What have been your most scariest moments filming Ski Sunday?"

Ed: "Strangely I can't think of many hairy moments when we've been filming. I've done a bobsleigh piece in a mono bob for this series and I went in a taxi bob first to get a feel for the course but then I was let loose in a mono bob in St Moritz going 110kph in an oversized gun barrel. That got my heart beating fast.

"Also sometimes when we are driving in the mountains, you get cars coming down the hill roads which are out of control because of the snow and ice and are heading right towards us. We've had a few close shaves that way."

Graham: "Bode Miller persuaded me to wear a race suit to film a course guide in Val Gardena and I was going so fast I jumped the Camels [a series of three small jumps which racers must negotiate in quick succession], that was scary and a mistake I won't make again!"

Ed: "I do get nervous watching Graham prepare for the Kitzbuehel downhill course guide on the Streif course as you have to really attack it but it's hard to watch him because it's such a tough one."

Gareth Vogan ‏(@GarethVogan) "At a guess, how many vertical metres would you say you've snowboarded/skied down?"

Graham: "I did a charity ski weekend for Make a Wish and we skied the height of Everest, which is about 9,000m"

Ed: "I reckon I've clocked up well over a milllion metres as I used to ride between 100-120 days per year for a decade when I was a professional snowboarder. Graham's probably skied 2-3 million metres."

Natalie Stevenson ‏(@Nataliebubbles) "Why won't they allow Lindsay Vonn to compete in the men's events - are the boys scared she'll beat them?"

Graham: "I believe she would finish maybe top 30 in a World Cup on a course she knows, like Lake Louise. Downhill racing is about sheer size, weight and power, her technique is as good as the men but she would not have the power to challenge in the top 10."

Graham: "Not every invention is a good one and these are under that category."

Ed: "Medieval rack torture any day above dual snowboards (one board for each foot). They are medial knee ligament damage waiting to happen."

George Carew-Jones‏ (@carewjones1) "How come Graham sounds like he's giving birth when he skis down the pro courses?"

Graham: - I ate so much over Christmas I probably look pregnant! It takes a lot of exertion skiing flat out for two-three minutes... I'm sure if the racers were mic'ed up, they would sound the same!"

Alistair Williams‏ (@AlibobWilliams) "If Vonn comes back to her best, do you think she could challenge Maze for the overall title? And Hirscher again for the men?"

Graham: "I think Tina Maze is skiing really well. She's strong not just in giant slalom but also combined and has really stepped up a level. It's her's to throw away now. Vonn will aim for a few downhill wins and will focus on the World Champs [which the BBC are showing] and Sochi. She had an illness which hospitalised her for two days and it took a lot out of her.

"The men: I think the change of giant slalom regulations haven't helped, the FIS have made people ski on outdated skis, so need to change your technique and Hirscher has found it difficult. It's very difficult to win overall if you're not racing any of the speed events. If Axel Lund Svindal can keep it going and rack up points in downhill, than I reckon he'll win the overall title."