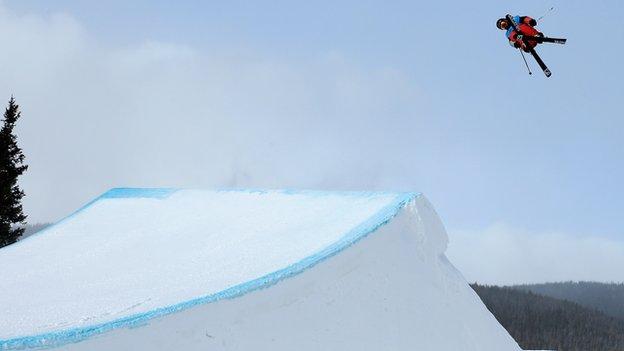 Great Britain's James Woods has won his second consecutive ski slopestyle World Cup in the latest round in Colorado.

Woods, 20, took the honours with a best score of 93.4 to repeat his historic success from the season's opening World Cup in Argentina in September.

The event at Copper Mountain was a qualifier for the 2014 Winter Olympics, which will be held in Sochi, Russia.

Slopestyle, where skiers and snowboarders are judged on the tricks they perform on jumps, rails and boxes, will be a new event at the 2014 Winter Olympics, and one in which Great Britain have medal chances.

Sheffield-born Woods has been a trailblazer for British freestyle skiing in international competition. His success in South America in the summer saw him become the first British man to win a World Cup, while his bronze medal at the Euro Winter X Games in March 2011 was his nation's first slopestyle skiing medal at a major championships.

His win in Colorado means he becomes the first British skier to win back-to-back World Cups and lead the world rankings.

In Copper Mountain, compatriot Morgan claimed 450 qualification points and is now well on his way to satisfying a top 20 ranking for the British Olympic Association criteria.

The 23-year-old from Southampton, said on Twitter: "Stoked I bagged a 5th at the first World Cup. Thanks for all the support!"

Britain's bobsleighers were in World Cup action at Koenigssee, Germany.

Pickering, who competed for Britain in the 100m and sprint relay at Beijing 2008, only pushed a bobsleigh on a full track for the first time this week.

Koenigssee was the seventh race of the World Cup season, in which GB's two-man bob have recorded two top-10 results.

Pickering tweeted afterwards: "Semi-decent day today. Would have liked to have pushed quicker, but considering only my 5th and 6th runs ever, could have been worse.

"Massive thanks to John Jackson and the rest of the guys for helping me through it all. Hopefully with a bit more technical work over the next few weeks my performances will improve."

In Sunday's four-man bob, Jackson guided Britain to 10th place and in the women's race, Paula Walker finished seventh, her second best result of the season and only a week after flipping her sled while leading in the Altenberg race. Brakewoman Gillian Cooke suffered minor injuries which ruled her out of action this week, Kelly Danyer taking her place.

Britain's Dominic Parsons recorded his highest World Cup finish with a seventh place in the men's skeleton in only his third race at the top level. A storming second run saw him move up from 15th. He tweeted: "Big relief to make it up on the 2nd run today, 7th ain't bad for a 3rd world cup race."

Shelley Rudman also claimed seventh place in the women's skeleton, leaving her seventh in the overall standings. Lizzy Yarnold has slipped to third overall after only managing 11th place.