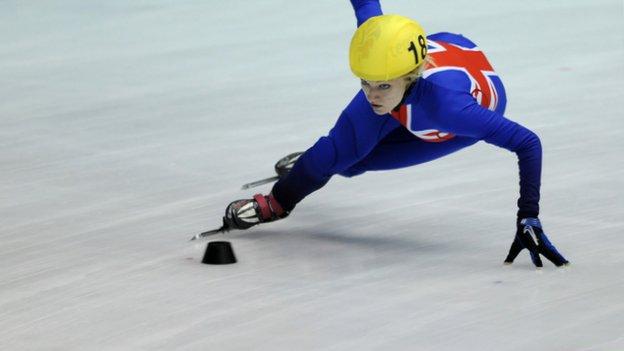 She has been on the podium at every World Cup 1000m race this season and is the number one ranked short-track speed skater in the world at that distance, yet Elise Christie is not satisfied.

The 22-year-old Briton believes she still has a way to go before she is at the top of her game.

"Hopefully I will be the perfect athlete by the Sochi Winter Olympics," Christie told BBC Sport.

Britain's only previous Winter Olympic success in the sport was in 1994 in Lillehammer when Nicky Gooch - now a coach with the British team - claimed a bronze medal in the 500m.

With a year to go before the 2014 Games in Russia, Christie is totally driven in her quest for a medal; getting up at 06:15 to train three times a day at the National Ice Centre in Nottingham. She has also changed her race tactics in an attempt to give her the edge over her competitors.

Short-track is an explosive sport where skaters reach speeds in excess of 30mph on a tight rink measuring 60m x 30m. The aim is to keep out of trouble from the pack and get over the winning line ahead of the field.

Christie prefers to go out hard from the gun, reach the first corner in the lead and stay at the front of the pack for as long as she can, fighting off the other competitors who are able to use her slipstream.

It is certainly paying off, with a win, two seconds and a third in the World Cup races this season alone. She also claimed a second place in Japan over 1500m, usually not her strongest event.

"I'm trying to perfect myself, iron out any flaws that would not make me win that medal [in Sochi]," added Christie. "I'm bringing myself up in the other distances [500m and 1500m] too so I'm not just focusing on one event because in my sport it could so easily go wrong.

"I'm training on my weaknesses as well as keeping hold of my strengths. Basically I want to be the best."

Christie will be in action with the rest of a strong Great Britian squad at the European Championships in Sweden this weekend, then has two more World Cup races before the season culminates with the World Championships in Hungary in March.

She describes her successes this season as "a mental reward, a payback for all the training" and says being the one to catch only makes her "strive forward" more.

Quietly spoken but with a steely determination, she initially wanted to be a figure skater and only started speed skating to mix up her training and spend more time on the ice.

But she showed immediate promise, caught the eye of the coaches at the British Championships and at the age of 15 moved from Livingston to Nottingham, where the elite squad are based, to train full time.

"I always had heart set on being a figure skater and making it to the top in that," she said. "But I'm glad I made the switch and I think it's a much better sport. I just didn't like the fact figure skating has judging. I prefer the first over the line, wins the race."

Short-track is comparatively well funded for a winter sport, receiving £2.78m from UK Sport for the four-year cycle to Sochi - almost triple the amount it received before the 2010 Games, when Jon Eley's sixth place in the 500m was the highest finish.

Christie says the increase in funding has made the difference and the squad is now reaping the rewards on the ice.

With greater funding comes the added pressure, though Christie is taking it all in her stride.

"Now that I've got everyone chasing me, I do feel some pressure as I want to make people proud, not let people down," she concluded. "But I've been working with a psychologist and we're trying not to make it a big deal. If you make it a big deal it's never going to work."