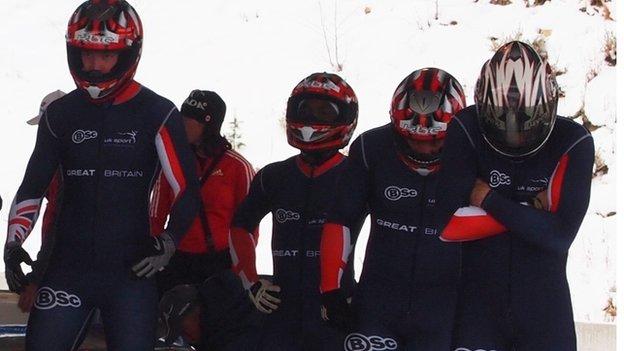 Jersey bobsleigh driver Will Golder has described his move to Bath as "the best thing I could have ever done".

Golder, who used to train in a tunnel in Jersey, relocated for the second half of 2012 for full-time training.

He has since spent time back in the island but hopes to return to the West Country in the summer as he tries to qualify for the Winter Olympics.

"In pre-season my standards were a mile better than they've ever been before," he told BBC Radio Jersey.

"It really was the best thing that could've happened.

"I was there [in Bath] for six months and the improvements that I made were quite incredible and it's now important that I go back there.

"I'll be back to Jersey in March and April and then I'll look to relocate again to Bath for the six months building up to the Olympic season."

Next on the agenda for Golder, though, will be his attempt to retain his title at the British Championships in Igls, Austria on 9 March.

He when the event was last staged at the end of 2011 but looks set to have a different brakeman this time.

"Some of the British crews will be there so I'm going there to defend my two-man title and with a look at maybe doing something with the Jersey Bobsleigh Club in the four-man," he added.

"I'm hoping to use one of my GB guys to come and retain my title."

Golder, 24, admits his head was not always in the right place over the past year and he missed out on a spot in the World Cup events in the second part of the season.

His main aim though is still but if he is to achieve that dream he knows he must avoid recurrences of the injuries which have hindered his progress in the past.

"I learned a lot about myself at the beginning of the year with how to deal with different pressures," Golder said.

"It got to the point where I was training very well but it got to the race and something wasn't quite working.

"I have to take the positives that I finished with in Bath, take that into May, and really pick it up again to improve even more going into the Olympic year.