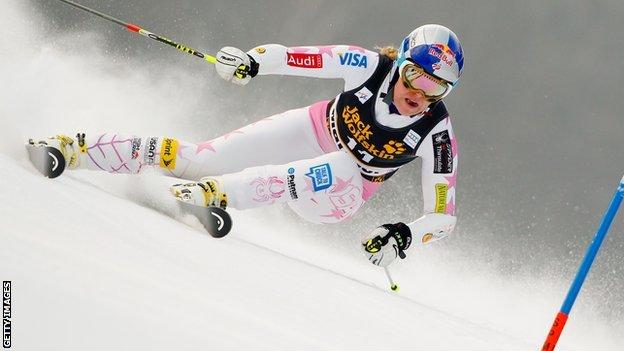 Olympic gold medallist Lindsey Vonn is out for the season after a crash on the opening day of the Alpine Skiing World Championships in Austria.

Vonn was airlifted to hospital after rupturing cruciate ligaments in her right knee but she should be back to defend her Games title at Sochi 2014.

The crash happened on Tuesday during the women's super-G event.

A helicopter was immediately called with medics treating the 28-year-old American on the slope for 12 minutes.

The United States ski team said Vonn tore her anterior and medial cruciate ligaments in her right knee and fractured a bone in her lower leg.

Vonn, a four-times overall World Cup champion, was 0.12 seconds outside the time of race leader and eventual winner Tina Maze of Slovenia when she fell.

The 2009 world downhill and super-G champion appeared to land on the side of her ski after a jump and flipped over before crashing into a safety gate.

The race at Schladming, which had been delayed by three and a half hours because of fog, continued after Vonn was taken to a local hospital but Maria Hoefl-Riesch and Anna Fenninger also dropped out after mistakes on their runs.

Switzerland's Fabienne Suter, who finished fifth, described the problems with visibility on the run.

"It's not a very difficult course but in some parts you couldn't see anything," she said.

Vonn made her World Cup debut aged just 16 in 2000 before competing at the 2002 Winter Olympics in Utah. In 2008, she claimed her first World Cup title to become only the second American woman to lift the trophy.

The Minnesota-born skier went on to secure gold in the downhill event at the Vancouver Winter Olympics in 2010 and also took bronze in the super-G.