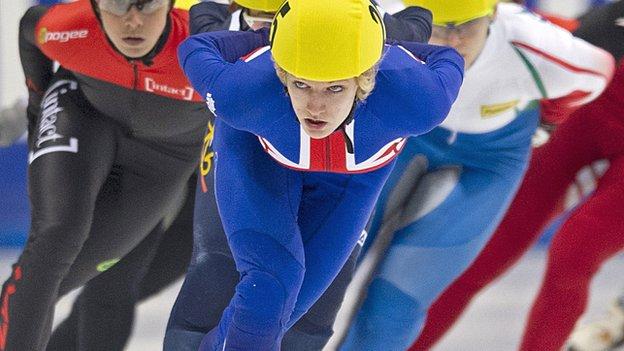 Elise Christie was denied the chance to become the first British woman to win a World Short-Track Speed Skating Championships medal after a collision in the 1500m final.

Christie, the 1000m World Cup champion, led from the start.

But China's Yang Zhou made a last-ditch push with two laps to go.

The reigning Olympic champion sent both Christie and Canada's Valerie Maltais crashing to the ice and was disqualified.

The eventual winner was Park Do-Yeong from South Korea.

I'm even more determined for a medal now

"It was obviously a particularly aggressive race, especially in the last few laps and I'm just a bit gutted when it gets taken away from you and there's nothing you can do about it," Christie told BBC Sport.

"I know I had it in me to get at least a bronze so that is a really frustrating part, but I guess that's the way the sport goes sometimes."

Christie will also compete over 500m and her specialist distance, the 1000m, on Sunday.

She added: "I'm even more determined for a medal now."

GB performance director Stuart Horsepool said: "It's disappointing because world medals are difficult to come by and I really think she would have been on the podium but for that collision.

"She's disappointed and devastated but she will learn from what happened today."

Christie's team-mate Charlotte Gilmartin impressed en-route to the semi-finals, but she was deemed to have impeded her opponents and was eliminated from the contest.

Paul Stanley also reached the semi-finals of the men's 1500m event but he and two-time Olympian Jon Eley, who failed to progress from the heats, will be expected to fair better in their favoured 500m distance on Saturday.