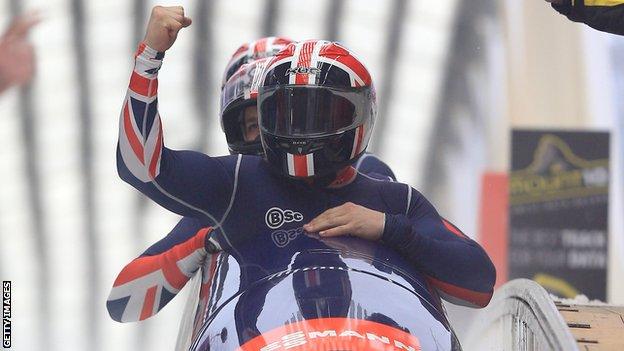 Jackson, 36, who is also a Royal Marine commander, helped the men's four-man team to a fifth-place finish at the World Championships in February.

He is due to undergo surgery on 23 or 24 July and hopes to return for the World Cup season in late November.

"Others have been back within three or four months so there's no reason why I can't be," Jackson told BBC Sport.

"Because my job in the marines is related to rehabilitation, I have a lot of background knowledge, so as soon as I heard it [Achilles] go, I knew it was not good. But I was already running through what I could do to get back."

Jackson, who is aiming to compete in his second Winter Olympics in Sochi in 2014, was taking part in a routine sprint training session on Saturday when he landed awkwardly after going over a hurdle at GB Bobsleigh's base at the University of Bath.

"It's a blow, but we're getting him the best possible medical support available," said GB performance director Gary Anderson.

"Our long-term goal is to make sure we qualify this sledge [for the Olympics] and make sure they can be the medal contenders that we know they have the potential to be.

"They [the GB men's four-man team] have been on an upward trajectory and there's no reason why we shouldn't still see that continue."

In order to reach the Games in Russia next year, the Great Britain four and two-man teams need to secure top-20 finishes in the world rankings.

The qualification period runs from the end of November until the middle of January.

"There was a moment when I thought 'it can take six to nine months [to heal], so will I be back with my team-mates battling for a medal, or sat in front of a TV?'" said Jackson.

"Although I may not be in my best shape there's no reason why, by the time the season comes and the other guys are in shape, they can't carry me a little bit and I'll be fully fit come the Olympics."

Jackson and his four-man team-mates finished 17th at the 2010 Vancouver Games and he crashed out in the two-man event.

However, prospects of success have been boosted this time around after finishing just outside the medals at this year's World Championships in Switzerland and the Olympic test event.

"Up until today we were all in better shape than this time last year, so it bodes well," he said.

"Hopefully my body can come back together and I'll be able to keep up with these young guys."

Should Jackson not be fit for the beginning of the Bobsleigh World Cup season in Calgary, Canada on 30 November, his place is likely to be taken temporarily by either Lamin Deen or Will Golder.