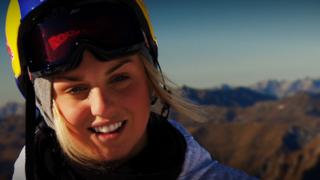 Fuller gets 'on track' for Winter Olympics

The Bangor woman took part in a cycling session at the Manchester Velodrome, along with other Winter Games hopefuls.

The 21-year-old is hoping to qualify for a new Olympic event, slopestyle, where riders head down a course which includes rails, kickers and jumps.

Fuller grew up in England but now lives in Holywood, County Down, and is regarded as one of Team GB's brightest hopes.