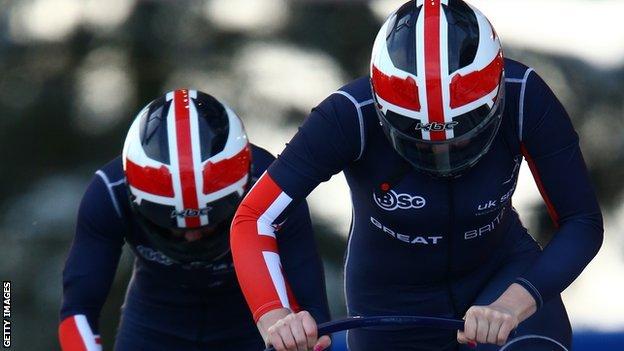 Team GB bobsledder Paula Walker is eager to find out who will partner her for the forthcoming season.

Gillian Cooke has been brakewoman with Walker since she took over as Britain's number one driver in 2010.

But Cooke must beat five other hopefuls at time trials in Latvia to keep her place for the World Cup series and Winter Olympics in Sochi.

"It's exciting times but now I just want to bond with my team, whether they are new or not," said Walker.

Bobsleigh: the track to Sochi

The Trowbridge-based 27-year-old told BBC Wiltshire: "We've got a few weeks to wait before we find out who it is and then we are pretty much back on to the ice.

"It will either be a new experience for people with new team members or it will be back in to the old system of having the normal kids on the back of the sleds.

"It's exciting but it can't come quick enough."

And Walker says there is stiff competition amongst the athletes.

"Historically there's always been one stand-alone athlete and the rest are evenly-spaced out in terms of their performances," she said.

"This year, however, there's one girl who is a little bit ahead, although not uncatchable, and the rest of them are covered by two or three one-hundredths of a second - which is unheard of.

The first World Cup race of a crucial 2013-14 season starts in Calgary, Canada, on 26 November, with results between then and 19 January 2014 determining who will qualify for the Sochi Games.

Cooke, who previously competed in the Commonwealth Games in pole vault and long jump, partnered former number one pilot Nicola Minichiello and together they won gold at the 2009 World Championships.

But a disappointing Winter Olympics a year later, along with a serious knee injury, saw Minichiello replaced by Walker, who finished 11th in Vancouver and took the Junior world title a year later.

Walker and Cooke have now been partnered together for two years but Walker says her choice of partner will come down to speed, not loyalty.

"You want the fastest person behind you so if that means changing somebody then you just have to work behind the scenes and make sure you're fluid on the pushing," she added.

"Although it would be great to have the same old team-member, and for it all to be lovely and hunky-dory, the fact of the matter is whoever is fastest will be in the team."