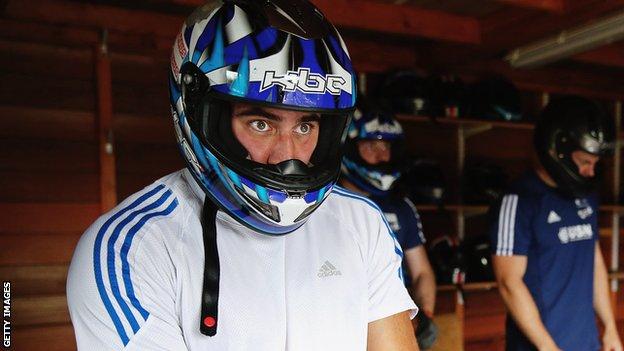 Kent's Dave Coleman has not given up on reaching the Winter Olympics despite being named in the GBR 3 bobsleigh squad for the upcoming season.

The brakeman told BBC Radio Kent: "There are no real finalised decisions as to who is going to the Games.

"There is a whole season to go through and there could potentially be injuries. There is a lot of hard work to still be put in."

Coleman, from Tonbridge, added: "It is steps towards the Winter Olympics.

You are trying to maintain a peak physique for about four months of the year. It is hard but it is about how you look after yourself

"It's good to be moving forward, making progress and maintaining a position within the British team.

"To be selected to represent your country, for any athlete in any sport, is always a great achievement."

The former discus thrower, who only took up bobsleigh last year, says there are various factors which could see him move up to either the GBR 1 or GBR 2 sleds.

"I'd never hope for anyone to get injured," the 27-year-old said.

"Body weight comes into it, seating positions, heights - there are all sorts of combinations and variations that can happen.

"If there is a gap within the sled or developments can be made then there are always options for other people to step in.

"If that is right for me then hopefully I'll get a call-up."

Coleman, who competed for Great Britain at the World Championships and the Olympic Test event last season, says it is up to him to stay in shape in case he is called upon.

"It is always a hard one as you are trying to maintain a peak physique for about four months of the year.

"You are racing week in, week out, travelling and facilities are limited in terms of gym and track to train on. It is hard but it is about self-preservation and how you look after yourself."