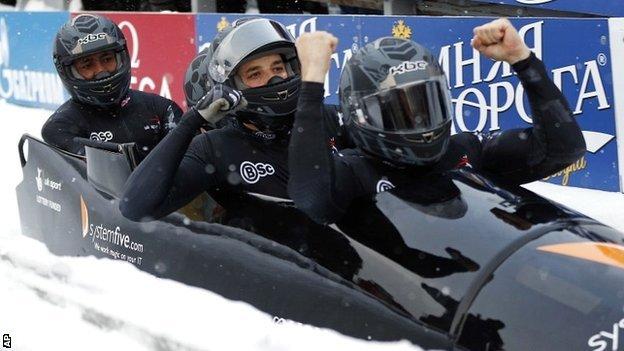 Vancouver 2010 Olympian Jackson took the first podium of his career by guiding brakemen Stewart Benson, Bruce Tasker and Joel Fearon to a combined time of one minute 50.22 seconds.

GB were in seventh position after the first run in New York, but finishing their second run in 55 seconds-dead was quicker than any of the other teams - and lifted them onto the podium.

This was GB Bobsleigh's first World Cup podium since Sean Olsson piloted them to bronze at the La Plagne World Cup in 1997.

And it marks an important milestone with the Sochi Winter Olympics beginning on 7 February in Russia.

GB hope to qualify two teams for the men's four and two-man competitions as well as the women's two-man event.

The British team's previous best finish of this campaign was eighth at the Park City World Cup in Utah.

Their achievement was all the more impressive given pilot Jackson, who ruptured his Achilles tendon in August, is yet to return to full fitness and cannot sprint at the beginning of the run to full intensity.

"It is all about getting it right in Sochi. Our trajectory is looking good."