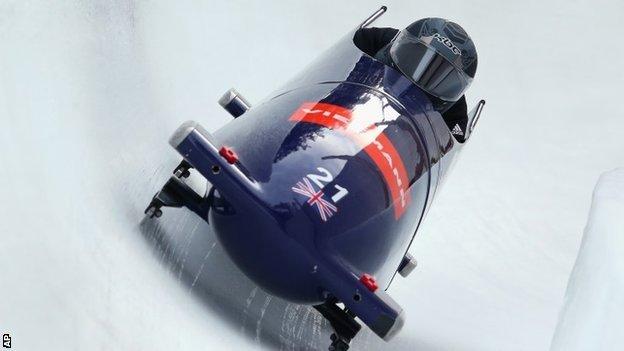 Team GB are unlikely to have a two-man sled in the men's competition at the Sochi Olympics after struggling on the final weekend of qualification.

A last-minute bid saw pilot John Jackson and brakeman Joel Fearon compete in both Switzerland and Austria on Saturday.

However, their combined results of fourth and 21st failed to raise them into the required top 30 in the world.

Britain's only remaining hope is with reserve driver Lamin Deen on Sunday.

If he can climb into the top 20 from his current position of 27th in the four-man standings then he would secure places at the Olympics in that event and the two-man competition.

In order to boost his prospects Deen will be joined by Jackson's four-man crew from the GBR 1 sled - Stuart Benson, Fearon and Bruce Tasker.

Jackson's place at the Sochi Olympics in the four-man competition is already secure and he will be partnered with former GB sprinter Craig Pickering, Ben Simons and John Baines.

"The staff and athletes have agreed it would be a huge benefit to us to have two sleds in Sochi, so we've decided to give GBR 2 the best possible chance," performance director Gary Anderson told BBC Sport.

Jackson, 36, ruptured his Achilles tendon in July and astounded medical experts after an innovative new treatment saw him return for the opening World Cup in November.

However, he was unable to push or sprint to full intensity, which has been particularly evident when competing in the two-man events.

It would be great to have another month to qualify, but it is what it is and we'll try our best in the four-man

The former Royal Marine Commando finished fourth in the second-tier Europa Cup competition in St Moritz, Switzerland on Saturday before placing 21st at the Igls World Cup just hours later in Austria and has struggled for consistency throughout the season.

Results in the four-man competition have been more impressive, including a historic World Cup silver medal in the US in December.

"Now I'm getting back to fitness and it would be great to have another month to qualify, but it is what it is and we'll try our best in the four-man tomorrow."

In the women's two-man competition, lead GB pilot Paula Walker will be joined by Sarah Adams rather than her regular partner Rebekah Wilson on Sunday as selectors consider possible alternatives ahead of the Sochi Games.

In the men's skeleton event, British number three Ed Smith kept alive his hopes of qualifying for the Winter Olympics by finishing 10th - ahead of team-mates Dom Parsons and Kristan Bromley, who came 11th and 18th respectively.

"He has had a difficult season, but what the Olympic selectors will look at is whether an athlete is on an upward trajectory."

British Skeleton will name the two men and two women in their Sochi squad on Wednesday 22 January while British Bobsleigh will also reveal their line-up at the same time.

The Sochi Winter Olympics begin in Russia on 7 February.