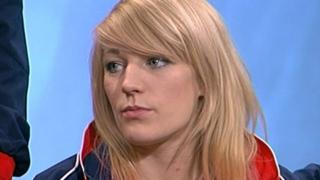 Short track speed skater Elise Christie tells BBC East Midlands Today her swift to return to training for the World Championship has helped take her mind off the disappointment of failing to get a medal at the Winter Olympics in Sochi.

Christie, 23, was one of Britain's best medal hopes but was penalised in all three of the events she competed in at the Games in Russia.