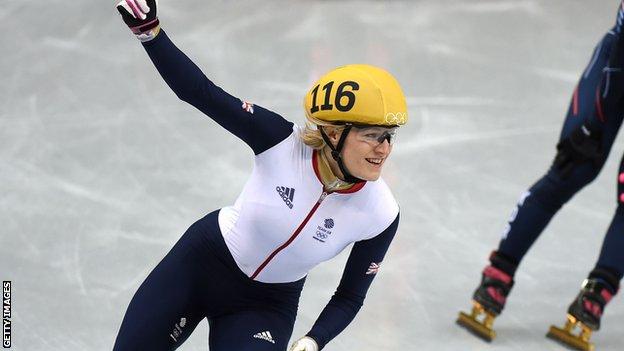 The 23-year-old Scot, who was penalised in all three of her events at the Winter Olympics in Sochi, finished behind South Korea's Park Seung-hi, with China's Fan Kexin third.

Christie, who was fifth in Friday's 1500m final, led from the front but was overtaken by Park on the final bend.

"I'm so happy to finally get a medal," she said.

"I'm a little disappointed not to win gold. I think I hesitated and sat back a bit on that final bend because I kept thinking back to what happened at the Olympics, but I got silver and that's one better than last year so I'm thrilled,

"I was more pleased with that result because I didn't skate that well on Friday, so I wasn't sure how today would go.

"Now I've done this and it takes the pressure off going into the 1000m on Sunday so I'm just going to go out, enjoy it and see what happens."

Jon Eley, Paul Stanley, Jack Whelboure and Richard Shoebridge finished second in their semi-final heat to ensure they will contend for medals with Russia, Korea and the Netherlands.