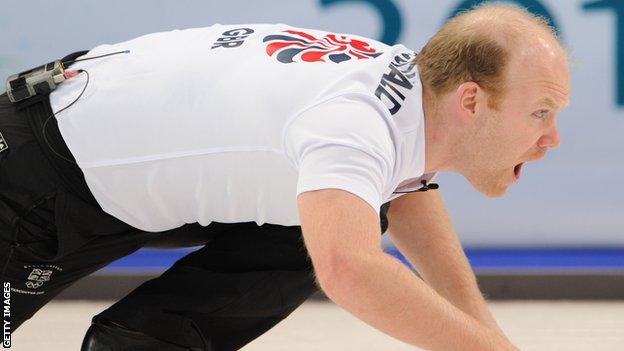 Scotland ended a disappointing World Men's Curling Championship by finishing ninth in the round robin after a 10-3 defeat by Germany.

Thomas Ulsrud's Norwegian rink topped the table with only one defeat in their 11 matches in Beijing.

Norway will face second-top Canada for a place in the final.

The loser will get another chance to make the gold medal game after a series of play-offs involving Switzerland, Sweden and Japan.

Canada and Switzerland also made the page play-offs after finishing second and third, with Sweden and Japan in the play-off spot.

The men's skip, whose rink are the current Scottish champions, is a three-time world champion himself but has not competed at this level since he was part of David Murdoch's rink in 2009.

Murdoch, who led his team to a silver medal in Russia, was ineligible to compete as his team were representing Great Britain at the Sochi Olympics.

Scotland lost their opener in China to Sweden 8-4 and were beaten 11-8 by the hosts then 9-4 by Japan before recording their first win, 10-9 against Switzerland.

They were then edged out 7-6 by Denmark before their second win, 8-6 against United States.

However, a 6-5 defeat by Czech Republic followed by a 6-4 loss to Norway ensured that they will cannot even qualify for a backdoor tie-breaker into the play-off.

They defeated Russia 7-5 but then lost to Canada by the same margin before their final defeat by Germany.