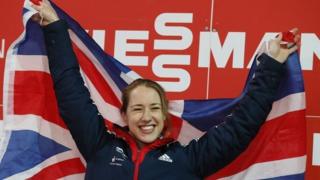 Britain's Lizzy Yarnold says winning World Championship gold in Winterberg, Germany, this week would be an equal achievement to her Olympic title.

Yarnold, who was speaking at the Roman Bath Spa, also tells BBC Sport's Nick Hope that although she struggled with motivation after Olympic success - new rivals on the World Cup circuit helped revived her competitive nature.

The 26-year-old is set to race this weekend. Live coverage of heats three and four will be on the BBC Red Button from 08:55 GMT on Saturday.