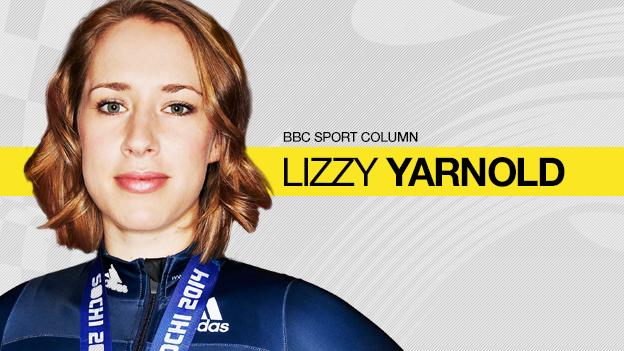 The target was always to "achieve". Now, after adding the World Championship title to my collection and completing the career grand slam, it's to "defend".

It'll mean a change in thinking for me. It used to be all about being the first to do something. Now the focus is different.

I'm the one everyone wants to beat. I've got to be ready for that challenge by training harder, preparing better and racing faster.

A number of sliders have either retired or are having a year off, so there are a lot of new faces on the World Cup circuit.

These new opponents are super, super ambitious, very relentless and determined to kick me off the podium. I'd be the same way.

They are training very hard and racing very fast, so I need to train harder and race faster. That means more homework and more research.

I'll make sure I know the tracks better, so I can take the corners quicker.

Attitude is key. I've always been the first in the gym and the last to leave. It's that sort of approach I need to have.

One area I need to work on is the push start. I'm about one tenth or two tenths behind the fastest, so I've got a lot to improve on.

Out of the loop

When I decided to paint my crash helmet gold ahead of the World Championships, I wasn't looking to make a statement.

I just thought it was a bit of fun.

Some sliders choose the colours of their national flag and add 'go faster' stripes. I thought I'd go for gold.

I know it caused a bit of reaction when I wore it for the first time, but the biggest one was from my family.

They didn't know I'd done it, so were surprised when they saw me competing on the telly. They couldn't believe I hadn't told them.

Laying it on thick

I got the helmet painted at a shop in Bristol. They've done work for me before, so I knew it was in safe hands.

It was hard choosing the right gold. I knew I didn't want a greeny-gold, but I wasn't completely sure how the helmet would look when it was done.

It looked good but I had trouble getting the visor back on as the gold paint was slightly too thick.

I had to do a bit of mechanical work to get the visor fitting perfectly again!

Turned into a bookend

I'll get a new helmet for next season. You have to for safety reasons.

I've not had a crash in the one I've got, but, when you are travelling down an icy track at 90mph, it suffers a number of knocks. It's inevitable.

I don't have a helmet custom-made but decide what colour to paint it and fit the visor so it sits well on the helmet. I'm not sure what the new one will end up looking like. As for the old one, I'll make it into a bookend.

I'd like to be able to bake a really good pretzel. I often eat them when I'm in Europe competing, usually with soup.

I'm good at breaking bread, all different types, so I hope it won't be complicated to do.

I'll seek guidance off YouTube but I'll largely be self-taught.

Travelling down an icy track at 90mph, with 5Gs of pressure on your body and the occasional bash into a wall, can take its toll.

I haven't suffered at all since the incident in Lake Placid at the end of last year, so those problems are all in the past, I hope.