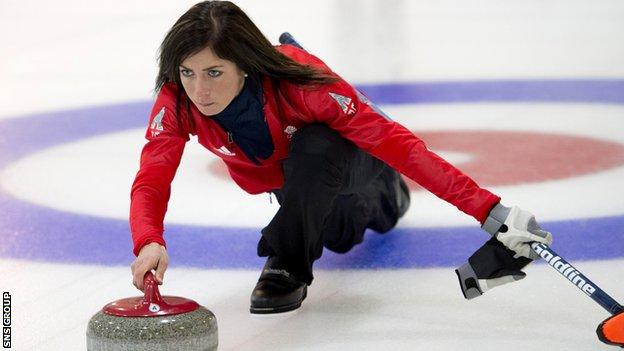 Scotland bounced back from an opening loss with two victories on the second day of the World Women's Curling Championship in Swift Current, Canada.

Eve Muirhead's rink began with a 5-3 defeat by Sweden but on Sunday overcame Korea 8-6 before beating Germany 10-3.

From 2-2 against the Germans, Muirhead tapped-up one of her own stones to score three points in the next end for a 5-2 lead, and never looked back.

"We've had a good day today," said the Scotland skip, world champion in 2013.

"After losing to Sweden we knew we had to come back and have two good wins. We're really pleased and I guess it's all about building momentum now."

Scotland lie third in the round-robin standings behind hosts Canada and Japan, who have both won their opening three matches.

Next up for the Scots are Italy at 2000 GMT on Monday, before facing the USA at 0100 GMT on Tuesday.