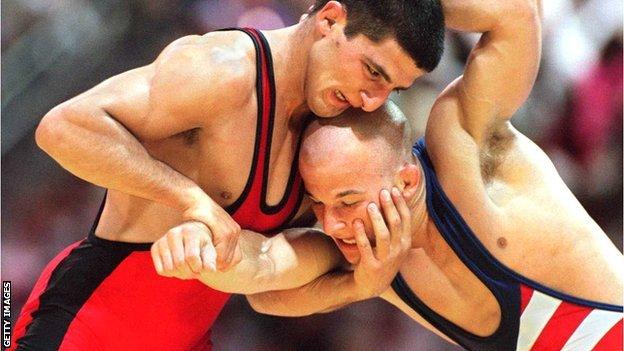 The coach of the Bulgarian Greco-Roman wrestling team has started a hunger strike to protest against the decision to drop the sport from the Olympic programme from 2020.

The Bulgarian Wrestling Federation said Armen Nazaryan "will not eat until the start of the European Championship on 22 March and will only drink juice".

With 16 golds, wrestling is Bulgaria's most successful Olympic sport.

Last month, the International Olympic Committee (IOC) made the surprise recommendation to drop the ancient sport from the 2020 Summer Games.

Wrestling was part of the first modern Olympics in 1896 and has been in every Games since, bar the 1900 edition in Paris.

It now joins seven other candidates battling for one spot in a revamped Olympic programme.

The IOC executive board will meet in May to determine which of them will be put to the vote in Buenos Aires in September.

Nazaryan won gold in Greco-Roman wrestling at the 1996 Atlanta Games [left in picture above] while competing for his native Armenia.

He then switched his allegiance to Bulgaria, winning his second Olympic title four years later in Sydney, and also won three world titles for Bulgaria from 2002 to 2005.