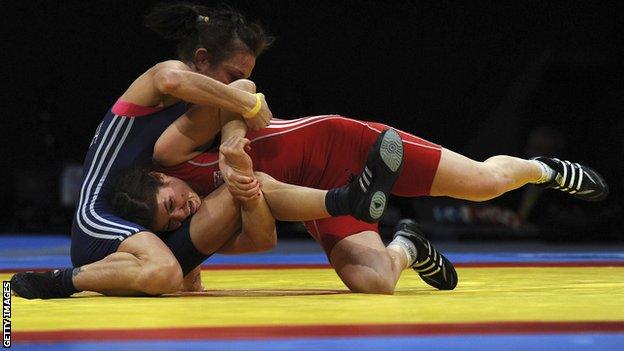 British Wrestling bemoaned its lack of financial support after Yana Stadnik was beaten in her second bout at the World Championships in Hungary.

Ukraine-born Stadnik, 26, who became a British citizen after London 2012, lost 11-4 to Anna Lukasiak of Poland.

Wrestling's £1.4m funding was removed entirely after the only GB competitor at London 2012, Olga Butkevych, lost her opening encounter

"The financial input to support the athlete and sustain an integrated performance system behind the athlete is all-important.

"Being outside that financial envelope creates a huge hurdle for an athlete before they even meet their opponent on the mat."

Team GB Olympian Olga Butkevych became the first British woman to win a Wrestling World Championship medal last year, but has not competed since after seeking part-time work to pay her rent.

Stadnik, the only British athlete competing in Hungary this week, finished fifth at the 2009 Worlds in Denmark and claimed silver medals at the European Championships and Sassari Grand Prix earlier this year.

The Manchester-based wrestler entered this year's World Championships ranked fourth in the global standings and impressed in her opening encounter, beating Anzhela Dorogan of Azerbaijan 6-2.

But she was unable to progress further after Lukasiak lost in the semi-finals, denying Stadnik a place in the -48kg repecharge.

The two-time European silver medallist hopes to compete for England at the 2014 Commonwealth Games.

Nicholson insists Stadnik and Butkevych have "extremely good chances" of securing podium finishes in Glasgow and could challenge for honours at the Rio Olympics in 2016 - but only with the right support.

"There is some respite in the form of financial support for an England wrestling team for Glasgow 2014," Nicholson told BBC Sport. "Both Yana and Olga will benefit from this funding.

"However, there will be a two-year funding gap between August 2014 and Rio 2016 unless funding from UK Sport can be secured."

UK Sport's highly successful 'no compromise' approach to funding - where it only supports sports seen as having credible medal prospects - has seen Team GB improve its Olympic Games performances considerably since Athens 2004.

Its annual review in late January will revisit the issue of British Wrestling's funding.