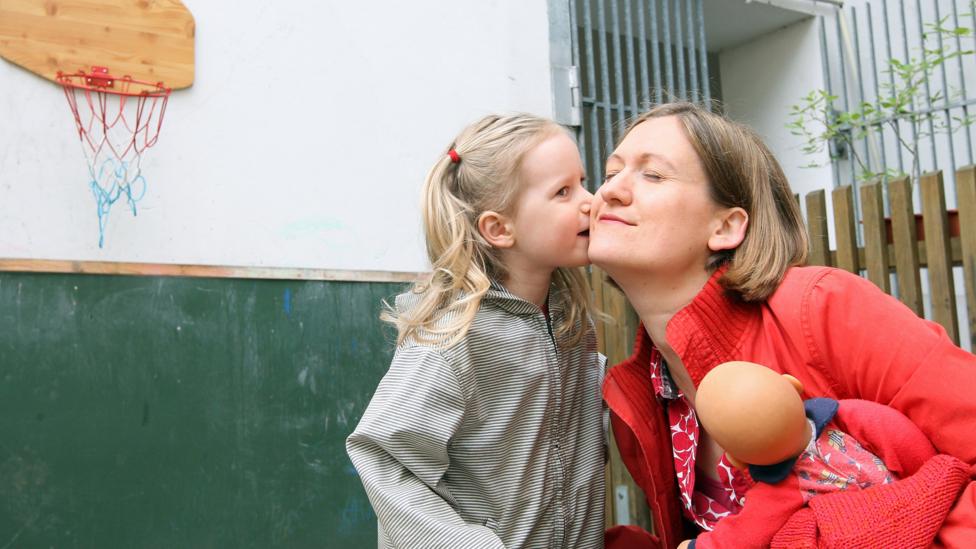 Women have been joining the workforce in the developed world en masse over the last several decades. About half of all mothers around the globe work for pay.

But despite their growing prominence in the workforce, for many mothers, juggling work and family responsibilities hasn’t gotten much easier. Two generations after women in the Western world began seriously climbing the corporate ladder toward executive positions, today’s working mothers still struggle not just with pay disparities and a rocky climb to the top, but also a bigger dilemma: who will watch the kids?

The availability of good, affordable childcare is the issue experts name as the most crucial problem many women face in their personal lives that impacts their professional lives.

Most working mothers depend on a patchwork of childcare solutions while remaining the go-to parent when one of these solutions falls through. When that happens once too often, longer hours go by the wayside, travel for business is curtailed and that climb up the professional ladder can stall.

Women in the ascent phase of their careers often cite “the challenges of managing work in the workplace and work at home” as obstacles, said Ilene Lang, president and chief executive of Catalyst, a New York-based non-profit that advocates for executive women.

Some nations have done a better job than others of navigating the needs of two-partner working families as mothers flood the job market.

In countries such as the Scandinavian nations, official support starts at birth, with mandated maternity leave that protects the woman’s job while she stays home from work for the first few weeks, months, or even years of her baby’s life.

This maternity leave can be fully paid, replacing her salary (as it is in France and Germany); partially paid (Austria and Canada, among others); or not paid at all (in the United States and Australia, for instance), according to a 2008 comparison by Rebecca Ray of the Center for Economic and Policy Research in Washington, D.C.

Some countries also provide for fathers to stay home with paid or partially-paid paternity leave; others offer an extended leave to one or both parents, usually at a lower rate.

After maternity or paternity leave, some national government programs provide childcare. In most nations, however, parents must cobble together arrangements between a nanny, family member, neighbour or a day care centre, all of which will be limited by their fees, hours of coverage and proximity to her home and workplace.

That means the quality of outside support systems makes the difference between the success — or failure — of working mothers, in particular, to excel in their careers. Caregivers at home or elsewhere, help around the house, assistants at the office and prioritizing daily tasks represent the type of support systems that often separate a successful professional mother from one who is running as fast as she can just to keep her job.

Experts point to the Nordic countries as the best for working mothers, who benefit from both state-provided childcare and paid family leave. Sweden, which grants mothers up to 40 weeks of family leave at full pay, and Norway, which gives 38 weeks, has the world’s highest percentages of mothers in the workforce, along with Denmark, at 18 weeks’ paid leave, according to a 2010 research paper. Roughly three of every four mothers in those countries work.

“Evidence from Europe suggests that where governments support the cost of childcare, countries have higher rates of women’s workforce participation,” said Yassine Fall, chief of the Economic Empowerment section at UN Women, the intergovernmental women’s agency.

Childcare availability is a different, though between countries within Europe. In Germany, for instance, prioritizes childcare for children of immigrants who don’t speak German, in hopes that they will learn enough of the language to start school adequately prepared.

Other than these programs, “quality, affordable childcare is relatively rare in Germany,” because the country’s policies are based on encouraging women to have more children, not on helping them work and raise a family at the same time, said Eileen Appelbaum, a senior economist at the Center for Economic and Policy Research in Washington, D.C., who studies workplace organization.

One of the world’s largest groups of working mothers is in China. There, 320 million mothers work, in a country of 1.3 billion people, says Julia Broussard, who heads UN Women’s China office.

Decades ago, Communist work units provided housing and childcare for their workers. But those arrangements have largely disappeared, Ms. Broussard says. Today, with many rural Chinese leaving farms to take factory jobs in the cities, children whose mothers have gone to cities to work are often left in the villages to be raised by their grandparents.

While it is a cultural norm for grandparents to care for children while parents work, “the state...  assumes that a woman will step in to provide this much-needed labour on an unpaid basis,” Broussard said.

Since the 1970s, China has had a mandatory early-retirement age for women, who must retire at age 50 for blue-collar workers and age 55 for white-collar workers. This policy has the side effect of making grandmothers available for childcare, Broussard said, but it also leads to older women with smaller pensions than their male counterparts, which makes them more dependent on their grown child for support.

For other Chinese working mothers, the lack of good childcare options encourages them to live with their parents or in-laws. Because China does not provide public school buses, a parent or other caregiver must drop off and pick up the child, making it difficult for a working mother to balance family duties and a job without help from her relatives, Broussard said.

As in many countries, Chinese parents’ professional choices can partly depend on the most basic logistical questions, such as who will escort a child to and from school, she said.

The nanny and day care state

The most convenient fix for higher-earning professional mothers in many Western cultures: a nanny. In many developed countries, these in-home, private childcare workers are often immigrants sending money home to their own children. Nannies are mainly the province of well-off families, who can afford the cost. In cities like New York and London, it is not uncommon for a nanny caring for two children to work 50 hours per week and be paid between $25,000 and $45,000 per year.

The prohibitive cost of a nanny means that lower-and-middle income working mothers usually have to find less expensive solutions—day care centres, family babysitting, arrangements with neighbours or a mix of these.

In the US, the government awards spots in public day care, or gives day-care subsidies, almost exclusively to low-income households, said W. Steven Barnett, a professor at Rutgers University in New Jersey who directs the National Institute for Early Education Research.

Add to that the fact that while working mothers began to play a major role in the US economy in the 1970s and 1980s, the government — for the most part — did not get involved in the question of who would care for their children during the work day, making no moves to provide childcare options or set family-friendly policies, Appelbaum said.

While no country has completely solved its dilemmas over how to balance the needs of working women and child care, experts say there are some signs that the situation is getting better compared to a few decades ago.

“If a mother had a sick child, the general view in society [in the US] was, ‘You knew you had a kid when you took the job, so what were you going to do?’” Appelbaum said. “Now there’s real momentum around introducing policies to provide working parents with the flexibility they need to be good parents and do their jobs and hold onto their jobs.”

worklife
1What cubicle dwellers really want
2Fathers cutting work hours
3What would Sheryl Sandberg do?
Around the BBC