Loading
Investing
When he speaks, global markets shudder
Share using EmailShare on TwitterShare on FacebookShare on LinkedinShare on Whatsapp 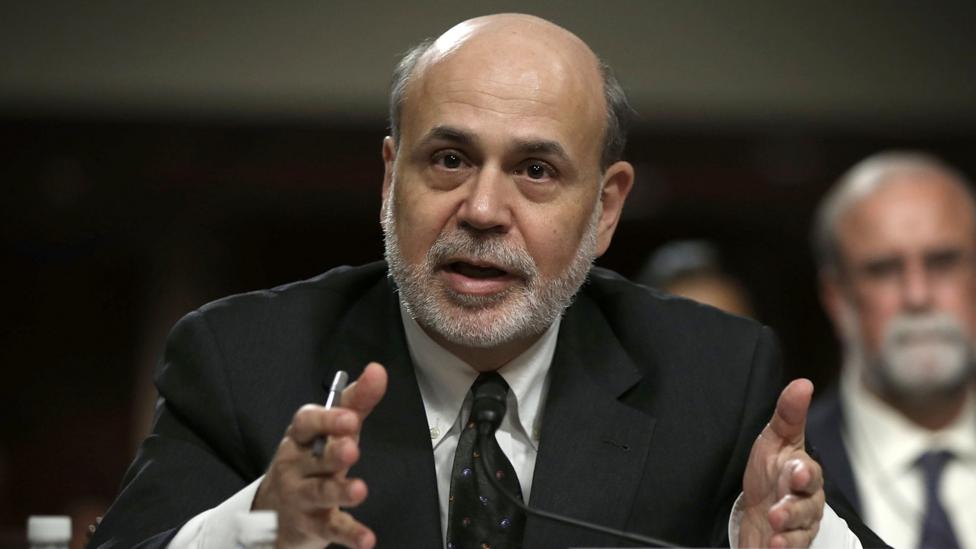 The obsession that equity markets have with the Fed right now is irrational.

When US Federal Reserve chairman Ben Bernanke whispers, the world seems to hang on his every word. Stocks across the globe flinch if Bernanke so much as hints at a change to US monetary policy.

But stock market sage, prognosticator or saviour isn’t exactly the role of the Fed — or any central bank for that matter. So how, exactly, did the global economy reach the point that one person seems to hold so much power over markets — where even concern over what might possibly be said can send stocks in Asia into decline hours before Bernanke and his Fed colleagues have even hit the snooze button on their alarm clocks?

It wasn’t always this way. Sure, the US economy has long been a powerful force in the world economy — the adage that when America sneezes, Europe catches a cold has been around since the Wall Street Crash of 1929 when the stock market crash that occurred before the Great Depression drastically impacted Europe.

But, as business has become increasingly global, the way money moves around the world via bank lending and equity markets have also become much more highly intertwined. That was infinitely evident during the global financial crisis and the housing market collapse, which were felt acutely in the US before quickly spreading to economies and markets around the world.

“In recent times, markets have gone up and down together,” said Barry Bosworth, economist at the Brookings Institute. “Money flows across borders and interest rates move together. Trade and finance have converted a set of (separate) international economies to a global economy.”

Never mind that the US Fed’s real mandate is simply to keep prices stable and unemployment low in the US. The US Fed controls the price of money, or inflation, by setting interest rates, essentially controlling the cost to borrow in the US. Interest rates, which also determine exchange rates, are integral to worldwide trade.

What, exactly, does the Fed do? How did it accidentally get into the stock market saviour business? And what’s next on the Fed whisper chain? Great questions.

The Fed controls the money supply in the US, the same way the European Central Bank does in the eurozone.

The Fed sets short-term rates, but with that rate at a bottom of 0.25% since December 2008, the Fed has used quantitative easing to increase the money supply. In short, the Fed buys bonds or, more recently, mortgage-backed securities, in an effort to lower long-term rates. Low rates, in turn, encourage investors to buy riskier assets like stocks and that drives up asset prices.

When riskier assets, like equities, increase in value, investment portfolios get fatter. In turn, people feel better about the future. That “wealth effect” prompts consumers to spend, said Ryan Sweet, a director at Moody's Analytics.

Lower long-term rates also sparked the US housing market recovery. “The US housing market directly and indirectly affects over one-third of the US economy, so creating demand in the housing market has ‘big bang for the buck’ if you are a central banker,” wrote chartered financial analyst Jason Voss, content director at the CFA Institute, in an email.

What does all this focus on the Fed and interest rates have to do with stock market — in the US or abroad? It’s part mystery, part unhealthy obsession, say experts.

Fundamentals, like growth and risk, are what should drive corporate earnings and in turn, stock prices, said Aswath Damodaran, professor of finance at New York University’s Stern School of Business. But, you wouldn’t know it from the hair-trigger reaction that equities have to Bernanke and other Fed officials.

“The obsession that equity markets have with the Fed right now is irrational. (It) makes no sense — it’s misplaced and dangerous,” Damodaran said.

Nevertheless, markets across the globe have reacted to Bernanke’s words — even when they are vague. Just this week, concerns that the Fed would begin tapering its bond purchases later this year sent US stock futures down Wednesday before the market opened and also weighed on Asian markets.

Many experts say the Bernanke market jitters are silliness. First off, a rise in interest rates would signal the US economy doesn’t need as much handholding to keep growing. The Fed will eventually let the bonds and mortgage-backed securities purchased through three rounds of quantitative easing roll off its balance sheet — something it says it will do when unemployment and inflation are heading in the right direction. Some stock market observers say it’s the fear of this unwinding that has the market roiled when Bernanke speaks. But it will take time for the Fed to offload the securities it has purchased, said Sweet. At first, the Fed will simply buy less each month until it stops buying securities altogether. But it could take a decade for Fed to unwind its balance sheet.

Exactly when this tapering will begin is a bit of a mystery — and may be one reason markets are so sensitive to even the slightest whispers of change from Bernanke or other Federal Reserve officials.

Of course, the macro economy is complex and multilayered. That’s one reason it’s so hard to discern when small changes will create large ripples in the market or otherwise, said Damodaran.

“These days, there’s no big hedge except to be as diversified as possible,” Bosworth said. “It’s a trade off between the rate of return and risk.”