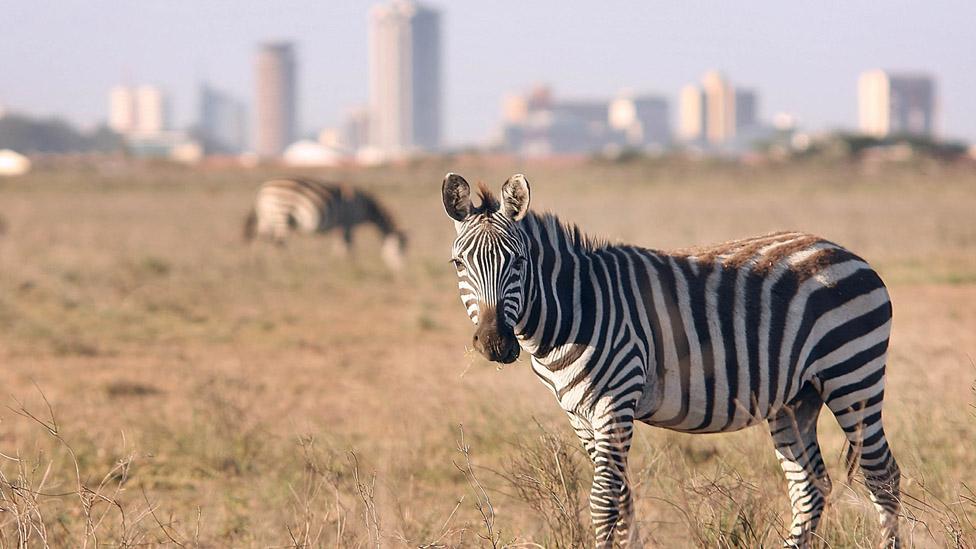 (Editor's Note : Bringing back our guide to the wild side of Nairobi after news four lions have escaped from Nairobi National park)

Bustling, hectic, Nairobi remains the gateway to East Africa and the region's primary business hub. Its towering skyscrapers and construction cranes are testament to the billions of dollars flowing in to this rapidly expanding city. But, in this part of the world, progress does not come easily.

It continues to be a struggle to convince the Western world that Nairobi is a progressive place, particularly after tragic events such as the terrorist attack on the Westgate Mall at in 2013. And to be sure, there are extra safety precautions and travel woes to consider that make Nairobi a city where business travellers need to plan carefully for visiting.

But Nairobi’s economy and populace remain resilient. Locals are friendly and Kenyans’ youthful spirit delivers a great sense of optimism for the country's future, 61% of the population are under the age of 25 and an increasing number accessing higher education and joining the capital’s workforce.

Much of Nairobi's sprawling development and construction work has been driven by Chinese companies. Chinese firms have invested nearly $474 million into Kenya in a bid to access resource-rich East Africa where oil and gas companies are tapping huge new resources.

With 5% annual growth in economic output, the Kenyan economy is firmly on the rise. Korean electronics manufacturer Samsung recently announced a new assembly plant for Nairobi, positioning the city as its new East African centre of operations.

Food processing company Del Monte has set up a Kenyan arm Cirio Del Monte Kenya to take advantage of the region's fertile pineapple production (Kenya is in the top five nations worldwide for pineapple production). The company produces both canned pineapple (the single largest export of Kenya) and juice concentrates.

Kenya's economy depends on tourism and much of that involves safari adventures. Typically, travellers spend the night in Nairobi before and after their safari, partially fuelling the growth of high-end hotels in town, before heading to the Masai Mara reserve (224 km from Nairobi) to spot lion, elephants and maybe a leopard or two. But what’s good for tourists has also been good for Nairobi's substantial meetings and convention business. Pan-African events are often held at the 28-floor Jomo Kenyatta International Conference Centre with a capacity to host more than 5,000 delegates.

Nairobi's Jomo Kenyatta International Airport is the home of national carrier Kenya Airways and the largest airport in east and central Africa. Routes are being expanded to Amsterdam, Bangkok, Guangzhou, London, and Paris. Across the African continent, the aim is to fly multiple flights daily to almost every major African capital from Nairobi.

The airport is dilapidated, though, and business travellers might be shocked at what they see. The facilities were outdated more than a decade ago and plans to build a new airport have been slow. In August 2013, a fire ravaged the arrivals hall forcing the airport to build a temporary facility.

Taxis to the city centre 19 kilometres away cost roughly 1,700 Kenyan shillings ($20). There are set fares depending upon destination, but note that it can take hours to get to your destination in the city’s heavy traffic. Agree on the fare before you get in and only use official taxis marked with a yellow line on the outside, or a car booked by your hotel. A new railway link between the airport and the city centre is under construction and is expected to be operational by 2015.

Don’t expect many creature comforts at Jomo Kenyatta. Arriving early (three hours, generally) is a must. Queues to enter the terminal can take 30 minutes because of a primary security check of luggage — before reaching the ticket counters. Navigating the terminal is easy, but be warned: security is handled at each gate and once past security, there are no shops or even toilet facilities. There is no notable restaurant and the free wireless Internet signal is intermittent.

Be careful with your money in Nairobi, never travel around with all your cash and cards in one bag. The shilling (86 shillings equals about $1) is the national currency and credit cards are widely accepted. ATMs, or cashpoints, at banks are also widely available in the city.

It’s smarter for business travellers to use machines located inside bank buildings, hotels or shopping centres, when possible.  Use credit cards in hotels or restaurants. If you’re visiting a local market carry cash, but don’t display it all at once to gain greater bargaining leverage (negotiating is expected).

Kenyans are warm-hearted and welcoming. The country has endured a series of tense elections and terrorism threats which have deterred tourists and this means most locals are happy to greet foreigners, often with curious questions and a genuine interest in their home culture. There is a very high level of spoken English among educated Kenyans, particularly in Nairobi, although the national language is Swahili. Political opinions will spark lively debate, but are best left to social events not business repartee.

This sprawling city’s hotels have improved markedly over the last decade thanks to the entrance of high-end brands. The pink-hued Villa Rosa Kempinski tower is less than 1km from the central business district on Chiromo Road and with its quartet of international restaurants is a popular choice.

In the residential suburb of Karen, made famous by Out of Africa author Baroness Blixen, is the stunning 45-room Hemingway's hotel opened in the spring of 2013. The Brasserie has a steakhouse menu offering some of the best cuts of meat in the region. Lining the walls of the dining room are numerous movie posters and photographs from films produced in, around, or about the region. Take in views of the lush gardens and distant Ngong Hills from the hotel, which is about 25-minutes from the city centre.

As a member of the exclusive Design Hotels group, the 137-room Tribe Hotel is the place to see and be seen in Nairobi. Its location by the American and Canadian embassies and the United Nations compound ensures the area is exclusive and quiet. Museum-quality statues and artwork line the walls and public areas.

Tribe Hotel's JIKO is a gourmet eatery making waves in Nairobi thanks to its Italian chef and his Canadian pastry chef wife. Local ingredients and produce are used for the fusion menu of Swahili and European flavours. Most notable are its T-bone steak (possibly the biggest serving on the continent with a plate that can feed up to four people).

Business travellers and expats alike are often found at Tamarind, a popular eatery that delivers local flavours. Whether for lunch or dinner, it is often busy with multiple languages and dialects filling the air. Be sure to sample the Zanzibari seafood casserole cooked in a Swahili coconut and tomato sauce or the Kenyan chilli crabs.

Eighty Eight is the Pan Asian restaurant at the Kempinski Villa Rosa serving everything from Thai to Chinese. Locals and expats swoon over the beef teriyaki and stir-fried pork dishes.

Try to make time to experience Kenya’s wild side. There are tour options for most budgets. Micato Safaris can arrange bespoke safaris lasting one day to three weeks. The family-owned company sets itself apart by including all gratuities. Even shorter, safaris involving a morning bush flight to the Masai Mara, mid-day game drive, and evening return can be arranged.

If only a few hours are in order, visit the David Sheldrick Elephant Orphanage, 18 km west of downtown in the suburb of Langata where elephants that have lost their parents to poachers are raised before being released in to the wild.

Asking what tribe someone is from, as an outsider, is considered impolite. While the question is not out of line, it is best left for discussion amongst locals and their business counterparts. Questions about one's normal ways of life and common practices are certainly welcome, but generally only if you know a colleague on a personal, rather than strictly professional, level.

Traffic in Nairobi is appalling: it is congested and slow, creating high levels of pollution in summer. Journeys between meetings by car can take a long time and walking is never a wise decision once dusk falls as foreigners are easy targets for petty crime. 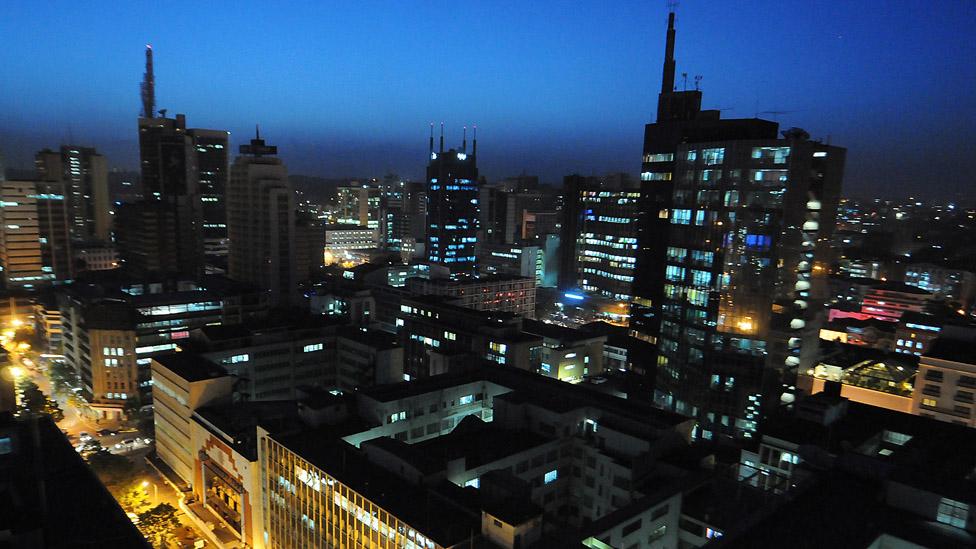 Many multinationals are expanding in Nairobi (Tony Karumba/AFP/Getty Images)

Many multinationals are expanding in Nairobi (Tony Karumba/AFP/Getty Images) 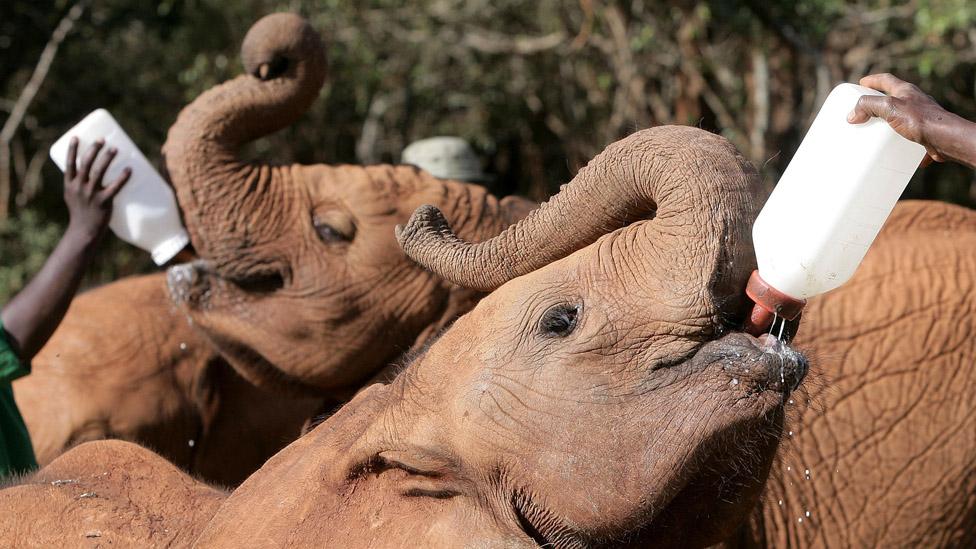 If you have a few free hours, visit an elephant orphanage. (Rosie Hallam/Getty Images)

If you have a few free hours, visit an elephant orphanage. (Rosie Hallam/Getty Images) 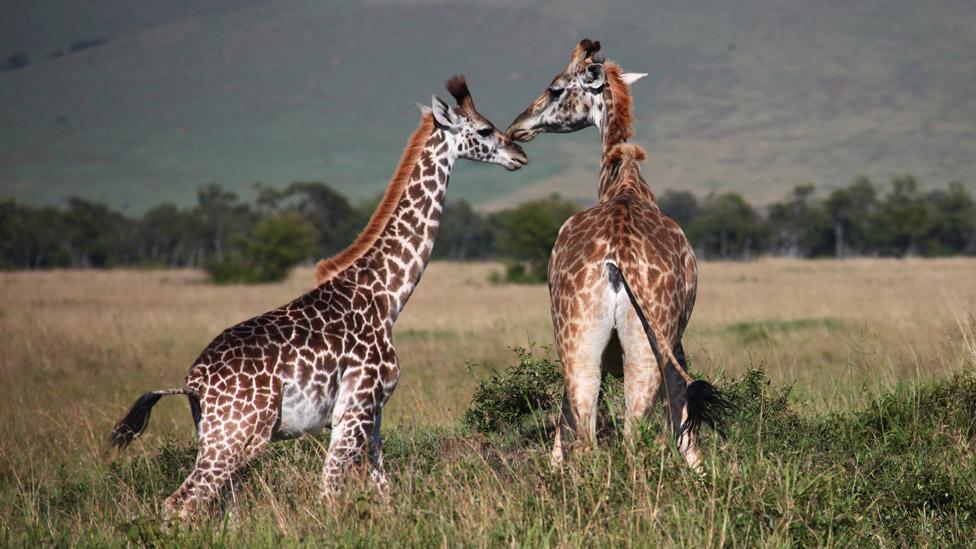 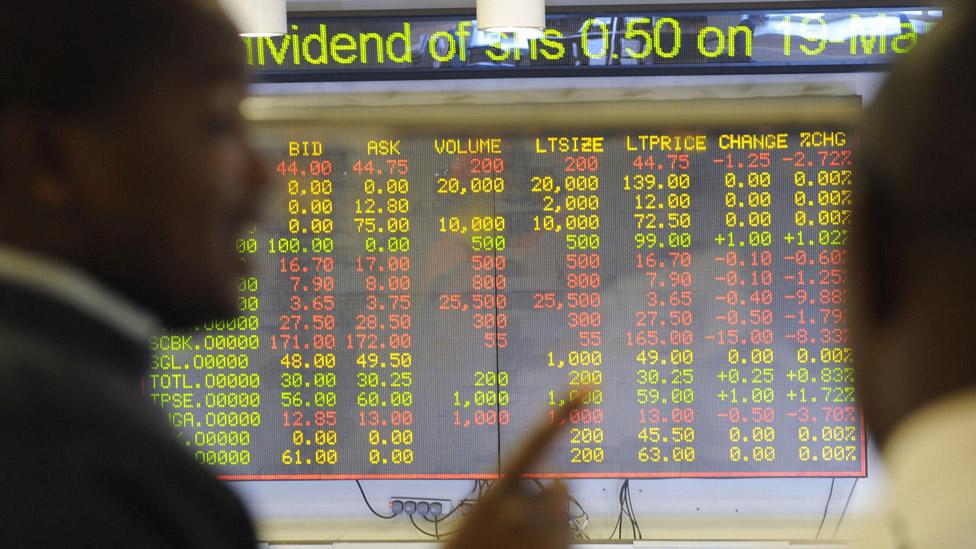 Chinese companies have made big investments into infrastructure in Nairobi. (Simon Maina/AFP/Getty Images)

Chinese companies have made big investments into infrastructure in Nairobi. (Simon Maina/AFP/Getty Images) 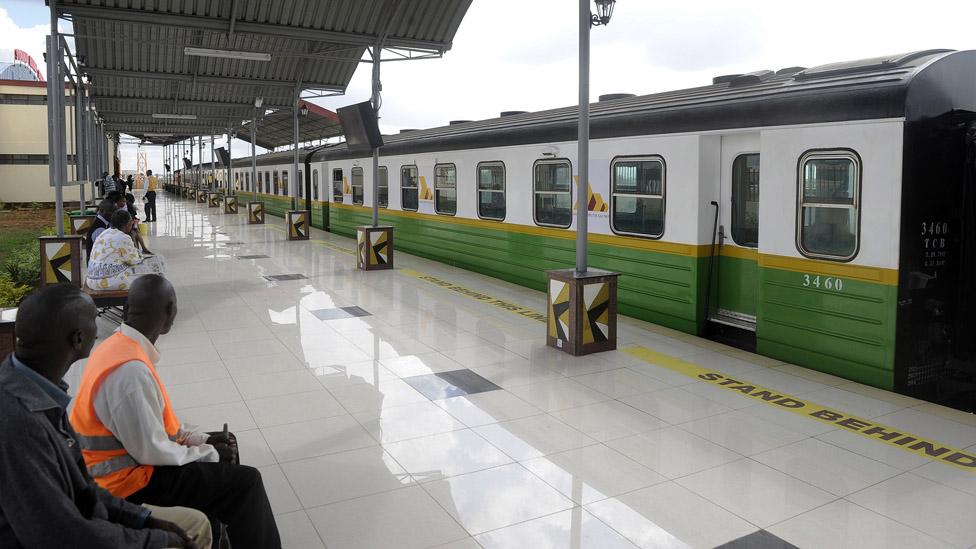 A taxi from the airport to the city centre can take hours. A train is planned for 2015. (Simon Maina/AFP/Getty Images)

A taxi from the airport to the city centre can take hours. A train is planned for 2015. (Simon Maina/AFP/Getty Images) 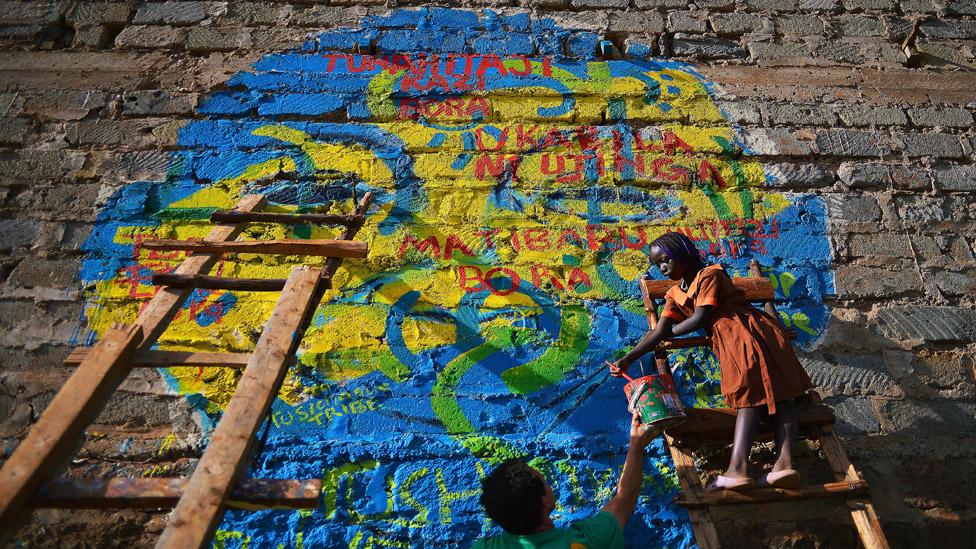 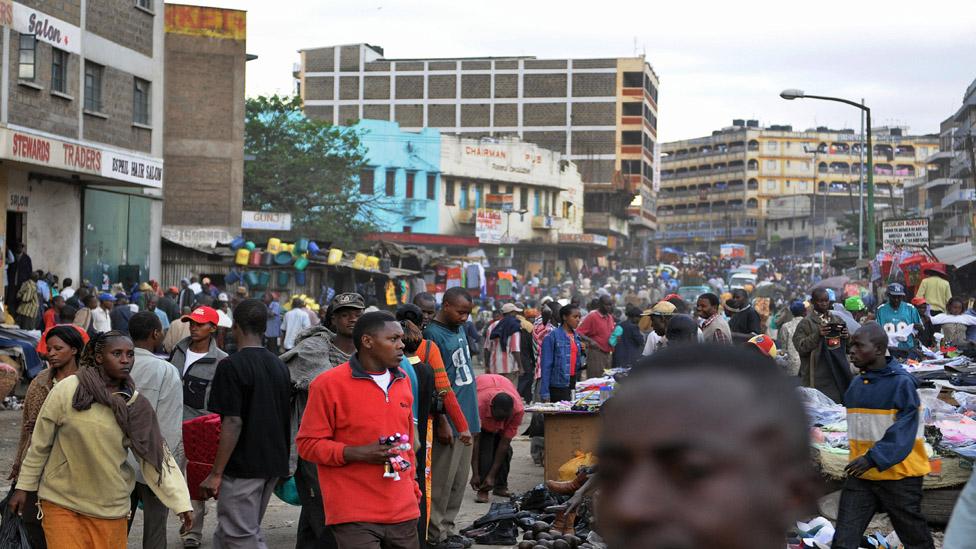