Loading
Health
Would you work under Delhi’s stifling skies?
Share using EmailShare on TwitterShare on FacebookShare on LinkedinShare on Whatsapp 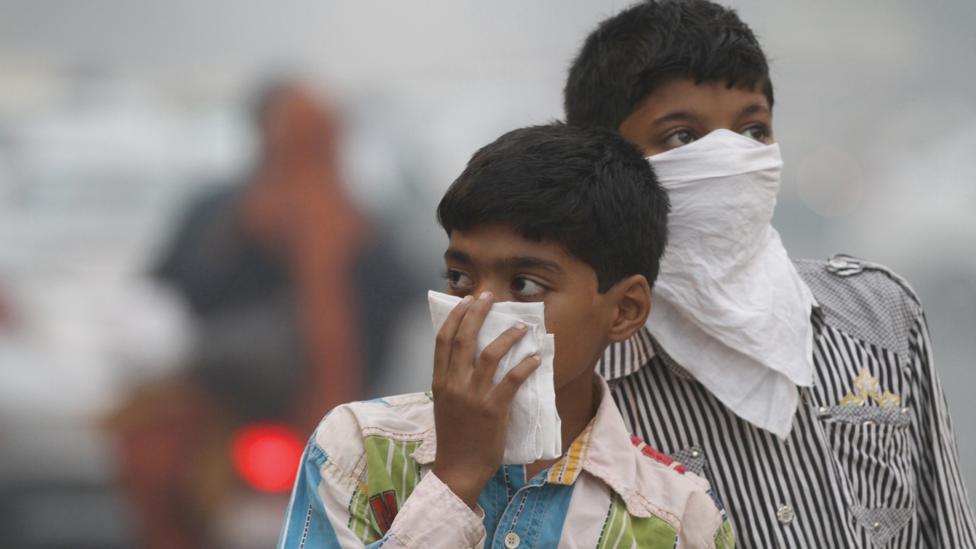 Suchita Salwan, founder of culture and lifestyle guide Little Black Book Delhi, loves the city where she has lived her whole life. But she hardly ever strolls the streets of Delhi to explore these days — and the same goes for her friends.

It’s not overcrowding or crime that keeps Salwan and her friends indoors. It’s severe air pollution. On any given day, thick smog weighs down on the city, causing people’s eyes to water and chests to constrict.

“People just refuse to walk around,” she said. “And that's terrible! The best cities are those which can be experienced on foot.” India’s capital, which has also become a magnet for expatriate workers, now vies with its Asian tiger rival, Beijing, for the world’s most polluted air. Toxins such as benzene, present in smoke and exhaust and carbon monoxide, are often found in Delhi’s air at 10 times more than the acceptable level, according to a recent BBC report.

As the business and commerce hub anchoring India, Delhi is critical to the booming Asian economy. It is also a city that is constantly moving and producing. That draws people to the business hub but its growth is also fuelling pollution.

Poor air quality that continues to deteriorate is causing serious health issues. Doctors have noticed an uptick in reported respiratory illnesses like chronic bronchitis — children are at particular risk — that they say are directly linked to Delhi’s polluted air.

Looking to the source

In short, Delhi’s pollution can be traced to the estimated 8 million vehicles on the road. In a way, denizens have exacerbated the Catch-22 situation. In a bid to avoid the great smoggy outdoors, many will regularly hop in their cars for short journeys that add to the air pollution.

About 1,200 new cars are added to the city’s already-packed streets every day, according to a BBC report. While the city implemented Euro IV emission standards in 2010, including filling pumps with cleaner fuel, the sheer volume of vehicles moving through the city or idling in traffic and spitting fumes continue to choke the air. 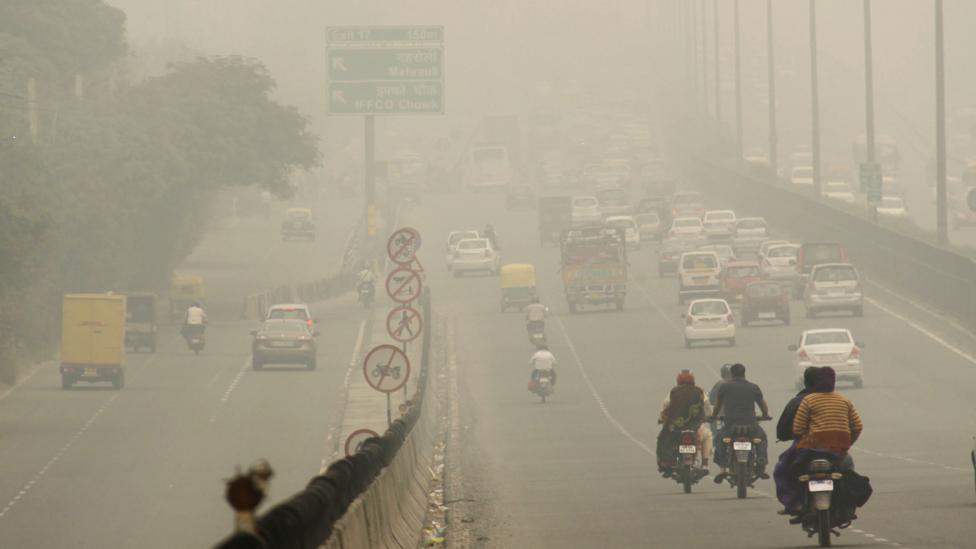 More than 8 million cars on the road contribute to high levels of air pollution in Delhi. (Manoj Kumar/Hindustan Times/Getty Images)

Additional factors exacerbate Delhi’s pollution further, though, including the fact that the city’s poor often burn rubbish to stay warm. Delhi is also a dusty city, adding those particles to the problem. The swirling dust that settles everywhere comes from both the dry topsoil and myriad construction projects. Massive kilns producing raw construction materials also burn near the city to serve its booming development needs.

Technically, Delhi has the legislative framework and infrastructure in place to tackle its pollution problem. In 2001, Delhi instituted laws requiring compressed natural gas (CNG) for all public vehicles from buses to gas-powered rickshaws.

In 2002, the Delhi Metro began running. It has an estimated daily passenger load of a staggering 2.5 million people and is still expanding. The city also expanded its bus fleet and tightened regulations on power plants, among other measures such as adopting Euro IV emission norms. 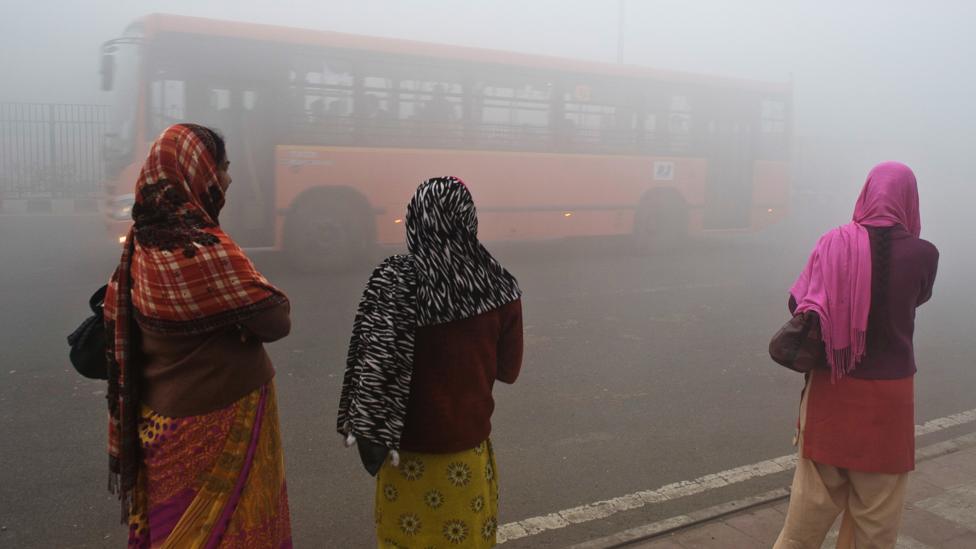 Women wait for a bus in Dehi, under polluted skies. (Prakash Singh/AFP/Getty Images)

Going green is on the mind of some business people in India. Homegrown Tata Technologies, sister company to the country’s largest auto manufacturer, Tata Motors, is developing electric and hybrid cars. With no current incentives for purchasing green cars, though, it is improbable many residents will be able or inclined to shell out the projected 1.2m rupee ($20,000) purchase price. In fact, many residents drive the city in the world’s cheapest car, the Tato Nano, which Tata Motors also makes and sells in India.

While organisations such as environmental justice NGO Toxic Links push for awareness and change, Delhiites continue to cover their faces and try to protect themselves hope for air quality improvement soon.

“I don’t want my kids to grow up in a city that forces them to stay indoors because it’s too polluted outside,” Salwan said.