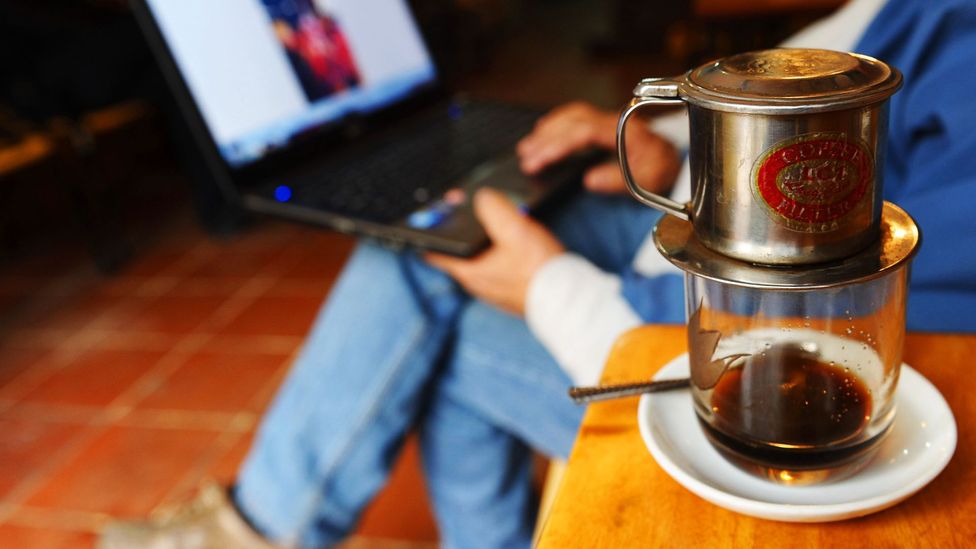 One drink isn’t enough revenue to keep cafe owners pleased at giving up a table for a full day.

He spends most of his week working from coffee shops. Goldberg, a life coach, might spend just $10 on food and drinks each day to earn the right to sit for up to five hours and work at a table.

Many independent contractors, consultants and other freelancers around the world use cafes to evade the solitude of at-home desks or the expense of renting office space.

For entrepreneurs, cafes might create community and can increase productivity, but they also create distraction and inconvenience with the persistent noise of beans being ground and steamers frothing milk. Goldberg, for example, leaves the cafe to take private coaching calls. For cafe owners, offering free wifi might draw more customers, but remote workers can occupy tables for several hours and spend very little. One drink isn’t enough revenue to keep cafe owners pleased at giving up a table for a full day.

For their part, cafes are either adapting to the influx of patrons typing away on laptops, or discouraging electronics all together. While some café owners don’t mind worker bees populating their tables for long periods, others go so far as to cover their power outlets or limit wifi access to 30-minute increments available only with purchase.

August First Bakery in Burlington, Vermont, in the US once had a no-laptops lunch period. In March this year, however, co-owner Jodie Whalen said the cafe stopped allowing laptops altogether because these compromises weren’t enough to curtail people from overstaying. Since then, they’ve seen a 20% revenue increase.

“The laptop user’s opinion of what makes a good customer is different than the cafe owner’s opinion,” Whalen said. “I think people’s intentions are good, they just don’t understand the business. It’s not sustainable for someone to spend $5 for a table.”

In cafes where laptops are banned, staff don’t shy away from enforcing policy, as Goldberg experienced at Palmanos in Winter Park, Florida, in the US.

“The person I was meeting with brought out his laptop to show me vacation pictures and the server walked over, picked up a small sign on the table that read ‘no electronics’ then put it back down where it was and just walked away,” Goldberg said.

Most of Café Grumpy’s locations in New York City have a strict no-laptop policy. So does Enghave Kaffe in Copenhagen and Bookplate Café in Canberra, Australia (between the hours of 12:00 and 14:00), among many others.

“Most customers are happy about our policy, but we do get some people who freak out every now and again,” Caroline Bell, owner of Café Grumpy said.

Around the world, each country has its own standards when it comes to cafe office culture.

It can be intimidating to open up your screen in countries like France or Italy where working in a cafe isn’t part of the culture.

Beyond social norms, Berlin-based blogger Kristin Addis said some cafes in Laos and Cambodia are difficult to work from because they aren’t equipped with fast wifi — if any at all — and lack power outlets. You might have better luck in major cities of Thailand or Malaysia where infrastructure is more advanced. Working from cafes in New Zealand can add up, Addis said, since many places charge for wifi. Hotspot network Zenbu, for example, charges customers $0.10 NZD ($0.09) per megabyte. That’s in addition to the cafe’s food and beverage charges.

In some places though, Addis said the price is worth it.

“When I was in Nepal, the power was out most of the time at home,” she said. But nice cafes typically have generators.  ”You are happy to pay 95.39 Nepalese rupee ($4) for coffee then because you just need to charge your electronics.”

Now living in Berlin, Addis can get by on six euros ($8.19) per day at places that are usually buzzing with creative types, although you’ll still find places in town that are anti-laptop like cafe The Barn. An additional drawback in Germany, she said, is the indoor smoking.

As in Berlin, some locales welcome workers with open arms, integrating the lifestyle into their culture.

Instead of charging for coffee, the international Café Ziferblat — which has locations in Russia, Ukraine, England, and the US — charges £3 ($5.11) per hour for a seat at their cafe including unlimited coffee, tea, snacks and wifi. After five hours, customers can continue to stay for free, given they clock in and clock out at the end of the day. Someone sitting for eight hours will pay just £15 ($25.72) — far less than renting an office.

“Normally in a cafe you sit down with your headphones on, but here you end up having conversations with people in the kitchen while you’re making your own tea,” Ziferblat Manager Sophie Grodin said.

Similar to Ziferblat, Coffee Bar in San Francisco’s Mission District charges $25 per month for unlimited access to internet that is faster than its free, public wifi. Meanwhile, the Thousand Pound Bend in Melbourne, Australia, offers free internet and a $0.50 AUD ($0.47) discount on coffee for patrons who sit in their designated “laptop land.”

Mobile App Developer Vaughn Dabney, a regular at Starbucks in Washington DC, said he enjoys the change in scenery, no matter the cost.

“I’m waiting for the day when we can go outside and plug into the grass because sometimes you just want to be working in the park,” he said.