Loading
Careers
Are you about to be sacked?
Share using EmailShare on TwitterShare on FacebookShare on LinkedinShare on Whatsapp 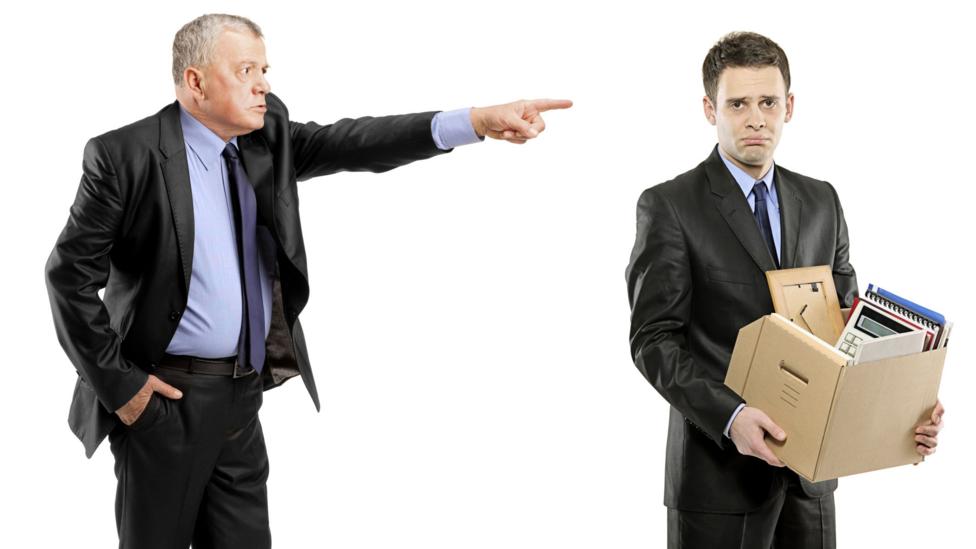 You’ve got that uneasy feeling. Things aren’t quite right at work. Was it something you’ve done? Are you, gulp, about to be fired? Did you make a mistake that you’ve yet to realise?

Most professionals worry about career mistakes and job security at some point in their careers. But, what are the real signs you are about to be fired — and what can you do to keep the axe from falling? Are there blunders that are too big for recovery?

These are topics LinkedIn Influencers weighed in on. Here’s what two of them had to say.

There are several tell-tale indications that you’re about to be sacked, wrote Brodrick in her post Four Signs You’re About to Get Fired and What to Do About It.

“You find your job advertised online; your boss asks you to write standard operating procedures for everything to do; your day-to-day tasks slowly start getting reassigned to other people (or you’re asked to train others on how to do them ‘just in case’); you’re not being invited to meetings that you used to be included in,” she wrote.

Any of these sound familiar? Don’t panic. There are ways to figure out what’s really going on, Brodrick wrote.

“Schedule time on your boss’s calendar to speak with him or her,” wrote Brodrick, but don’t give them the topic ahead of time. “You don’t want to give your boss time to prepare for this conversation. You’re more likely to receive candid answers this way.”

Once you’ve got the meeting set, be prepared for some tough answers, Brodrick wrote.

Start the meeting simply: tell your boss you’re “seeing signs that people typically associate with getting fired and that you would like your boss to clarify the situation for you,” she wrote. “Now be quiet. Let silence be your weapon... just sit there and wait for their response.”

You’re likely to receive one of three responses, wrote Brodrick. The worst, of course, would be confirmation that you will be sacked. But, you might receive a good-news response — that the department is bulking up or putting new people in the pipeline in order to promote you, she wrote.

The third possibility, wrote Brodrick: “The company is advertising because they hear that you are looking for employment elsewhere, or because they feel like your workload is too much for one person and they want to add another member to the team.” If that’s the response, gauge whether the boss is telling the truth — and inquire more deeply about your responsibilities moving forward.

“No matter what your boss’s answer is, take the time to think before you reply,” Brodrick wrote.

There are career blunders — and then there are near-fatal career blunders, wrote Ryan in her post The Five Deadliest Career Mistakes. The worst missteps can haunt you, or make it hard to push forward in your profession.

“Leaping without looking is the first deadly career mistake,” wrote Ryan. “Many talented and marketable people take the first job offer they get. They figure ‘any job is better than no job’ and undervalue themselves dramatically in the process.”

It makes sense, in some ways, explained Ryan. “On the one hand, they have an unexciting job offer. If they take it, they don't have to go on any more interviews, or worry about how to pay the rent,” she wrote. “If they pass on the offer, they remain open to everything the world might have in store for them, but they stay in Indecision Land a little longer. Most of us settle very quickly for a steady state over a state of flux, even when it hurts us to do so.”

The second deadly career mistake? Letting someone else run your career, wrote Ryan. This can easily happen when you’re in a company you like, but the milestones set for you don’t make sense or seem to be one more thing to do before the reward you already feel you’ve earned.

“An employer's plan for you, no matter how well-intended, is built with the employer's requirements in mind, not yours,” wrote Ryan. “If you're spending your energy hitting somebody else's yardsticks, you can easily lose track of your own path.”

The “third deadly career mistake is to burn bridges,” wrote Ryan. “When you get so fed up with a job that you have to leave, then go.”

And remember, you might not be so innocent. “You participated in creating the negative energy that you desperately want to escape right now. You've got a responsibility to disentangle yourself from the mess in an adult way,” Ryan wrote. “Unless you're being abused or are in an unsafe situation at your job, give two weeks’ notice on your way out. Smile, say only positive things and keep breathing. If you make less than a gracious exit, you're squandering whatever value your soon-to-be-former-job could add to your resume, not to mention your reputation.”

Editor's Note: (28 November, 2014): BBC Capital first ran this story last month. As the end-of-year holidays approach, so too does the period when many companies announce redundancies. We've brought this topic back as it's just as relevant now as when it first appeared.