Loading
Luxury
Romancing the stone: How to buy diamonds
Share using EmailShare on TwitterShare on FacebookShare on Linkedin 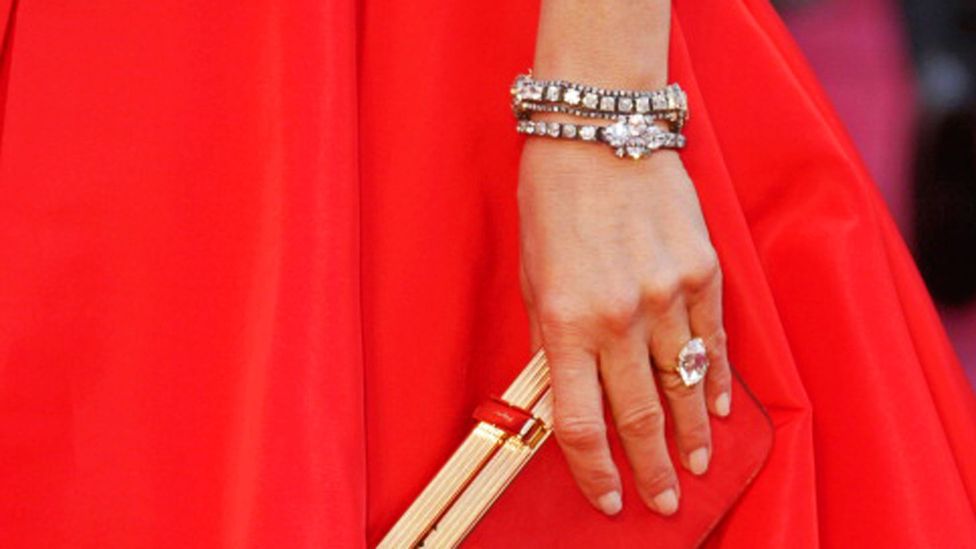 When Boris Gansevich, 32, decided to propose to his girlfriend, he drove to a nearby jewellery store to buy a diamond ring. But, after a three-hour chat with the jeweller, he left empty handed. The process was more involved than he'd bargained for.

“It’s more complicated than buying a car,” remembered Gansevich, an IT project manager in San Diego, California, in the US.

In the end, it took him more than four months to make the purchase. He settled on a $7500 ring with a 1.5-carat diamond from Costco, a warehouse retailer mostly known for selling discounted food items in bulk, but which also offers a selection of jewellery, electronics, clothing and furniture.

A 0% APR (annual percentage rate) credit card helped Gansevich pay off the ring in monthly installments and a generous return policy meant he could bring back the ring within a year for a full refund.

“It’s a platinum setting with a halo of diamonds around it,” he said, using terminology he’d learned in his research. “It looked really good.” His fiancee loves it.

Purchasing precious stones requires more research and legwork than many consumers realise. It’s not just romance that is driving the market for these covetable jewels.

These days, some consumers who are hesitant to invest in a volatile stock market and are priced out of real-estate investments are turning to diamonds, according to Olya Linde, a partner at consultancy Bain & Company in Moscow. “It’s an alternative investment that allows investors to hold on to their money,” she said.

While Europe, North America and even Japan have a culture of purchasing diamonds, India and China, traditionally known for purchasing more gold and jade, respectively, are becoming major players in the $74b global diamond market, according to Linde, who was the study lead on Bain’s 2013 Global Diamond Report.

Auction houses including Sotheby's and Christie’s have also seen a continuous uptick in diamond sales. In October, Sothebys sold a purple-pink coloured diamond at auction for $17.77m, the highest amount paid per diamond carat at $2.11m per carat. Diamonds are always benchmarked in US dollars globally.

What to look for

Before buying expensive baubles, don’t trust your eye and ask for the relevant documents showing proof the four Cs that verify a diamond’s authenticity and value: cut, colour, clarity and carat weight. The cut looks at the stone’s shape and proportions, the clarity examines imperfections, carat weight looks at size, while colour mostly tracks the absence of colour. Stones are assessed on a grading scale D through Z for colour (with D being best) and from flawless to 13 for clarity.

Diamonds are typically graded on these four Cs to help determine whether consumers are paying a fair price — but even the origin of the stone can add to its value. When purchasing traditional diamonds, buyers should look for colourless stones that reflect plenty of light without any visible imperfections, said Los Angeles-based Renee Newman, author of the Diamond Handbook: A Practical Guide of Diamond Evaluation.

Compare diamonds through certificates issued by like third-party labs such as the Gemological Institute of America and the European Gemological Laboratory. These documents are often part of the sale at reputable jewellers and used by insurers when determining coverage and replacement value.

The Kimberly Process, another certification offered with some diamonds, was established in 2003 to help buyers procure conflict-free diamonds, but still has many critics who say it’s not doing enough to discourage the sale of conflict diamonds.

Diamonds that have been artificially enhanced are significantly cheaper, so it’s important to understand whether the diamond is natural before making the purchase, Newman said.

When choosing your jewellery, look for settings that are secure and will keep the diamond from coming loose. “The diamond has to be set well,” she said.

Settings are safer with six prongs rather than the traditional four, said Newman. A bezel setting, which has a band of metal that wraps all the way around the diamond, can often be the most secure setting for a diamond.

As well, it isn’t always necessary to splurge on higher-grade diamonds. For the average consumer, there’s no need to purchase the best quality in terms of clarity and colour, said Russel Shor, a senior analyst with the GIA in Carlsbad, California.

Settings can be made to cover imperfections. “If it’s mounted on a ring, you won’t notice anything,” said Shor, who adds that minor flaws, called inclusions, can often be invisible to the naked eye once the diamond is set.

Diamonds rated G through J with some inclusions that are cut well, can be thousands of dollars cheaper than a higher quality stone, without compromising the look. Additionally, purchasing a diamond smaller than one carat can be significantly less expensive as prices rise steeply at every whole carat weight.

How to buy it

Expensive settings can push the price of your diamond jewellery out of reach, but there are more affordable alternatives.

Jewellery designer Anna Sheffield offsets the expense of purchasing a diamond, by using less-expensive mixed metals in some of the fine jewellery she designs for her customers. A version of her Pave Wheat bracelet incorporating sterling silver and smaller pave-style diamonds costs $1200 — that’s $2650 less than a similar version set in gold.

A round diamond shape can also appear bigger than the square princess cut with a similar carat weight.

“It’s aspirational to the more expensive versions,” said Sheffied, who is based in New York.

Additionally, diamond jewellery by top brands such as Bulgari, Tiffany, Cartier, along with smaller sought-after jewellers, can be worth more than the diamond alone. In the last decade, consumers have placed a higher value on designer names, which can increase the price of the jewel exponentially.

“All of a sudden a designer’s piece can be in high demand,” said Newman. “But it’s not guaranteed — it’s a matter of luck.”

While many customers are wary of purchasing diamonds online, some web-only retailers can offer cheaper prices for quality stones.

Bluenile.com, based in Seattle, in the US, allows customers to search through more than 200,000 diamonds in its inventory and compare the quality and price of particular stones. The website, which sells to 50 countries, also contains information to help educate consumers about the diamond trade. Purchases come with a 30-day return policy.

Another benefit of buying online from reputable companies such as Bluenile is the larger selection offered over a traditional jewellery store, said Chief Financial Officer David Binder. But do your homework.

Diamonds as an investment

If you are looking for an investment, Shor recommends purchasing loose stones that are easily resalable and “top of the line” such as those in the D through G categories on the colour scale.

Known as rare diamonds, coloured diamonds in blue, pink, yellow — and the coveted black — have increased in value exponentially in the last five years and are only one of every 10,000 diamonds mined, he said. The most expensive diamond ever sold is a 59.6 carat pink diamond called the Pink Star, which was cut out of a 132-carat crystal found in Africa. It was sold at Sotheby's for $83.2m in 2013, but has been reacquired by the auction house and valued at $72m after the buyer defaulted.

“These diamonds are not meant to be worn — you put them in the bottom of the safe,” Shor said. Rare diamonds can cost on average of $100,000 per carat.

Wealth managers at major banks can help facilitate the purchase of an investment diamond, while top investors often turn to auctions at Christie's and Sotheby's. Dealers in the world’s diamond hubs including Antwerp, New York, Hong Kong and Tel Aviv can also be a good place to turn for finding investment-quality stones, Linde said.

The Investment Diamond Exchange, one of several startup diamond exchanges based in Los Angeles now ships diamonds to buyers all over the world and allows buyers to sell back the diamonds at market prices.

Rough diamond prices have risen 13% or more since the 2008 financial crisis and are now at their peak, according to Bain. Buyers are willing to spend on stones because they are sentimental about the item. “For the consumer, it’s a very emotional product.”

Editor's Note: This story has been updated to reflect a correction to the Bluenile.com return policy. It is 30 days, not one year. 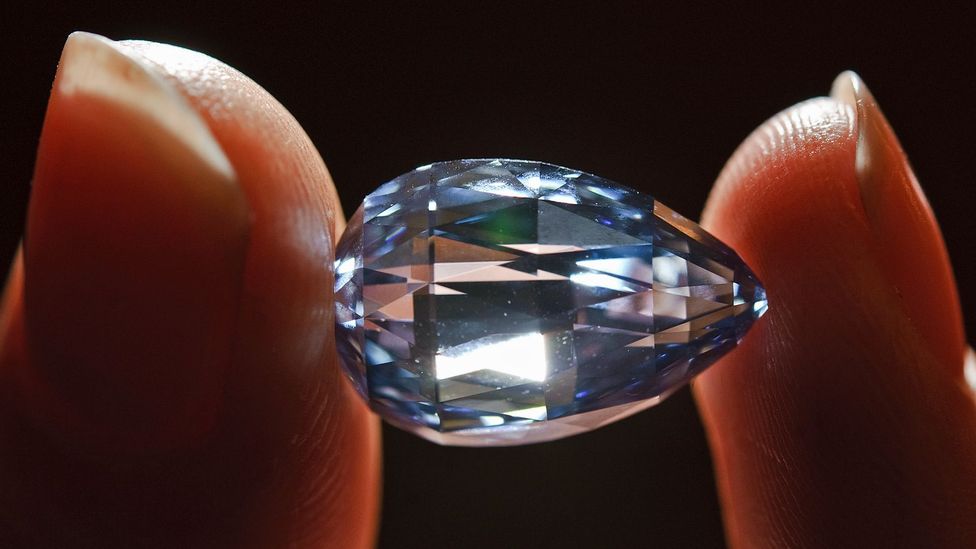 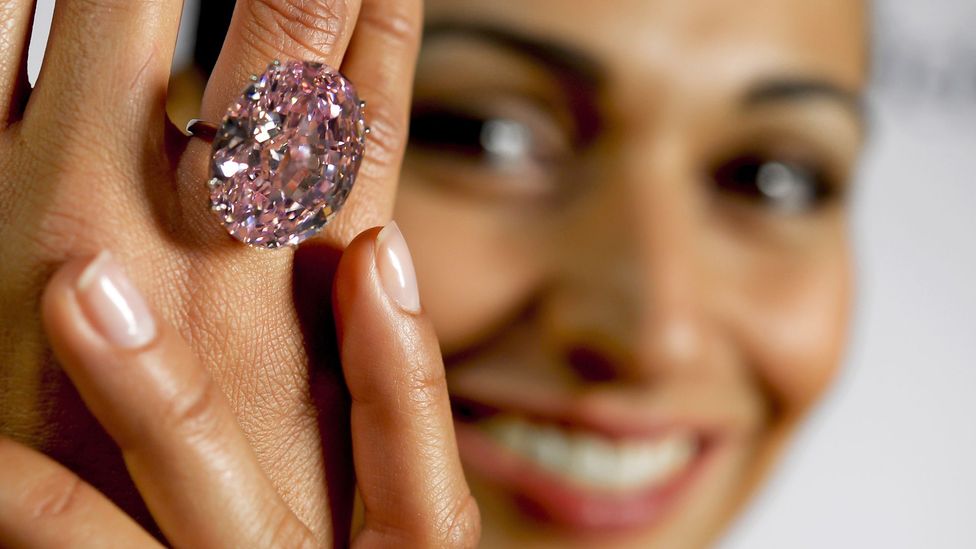 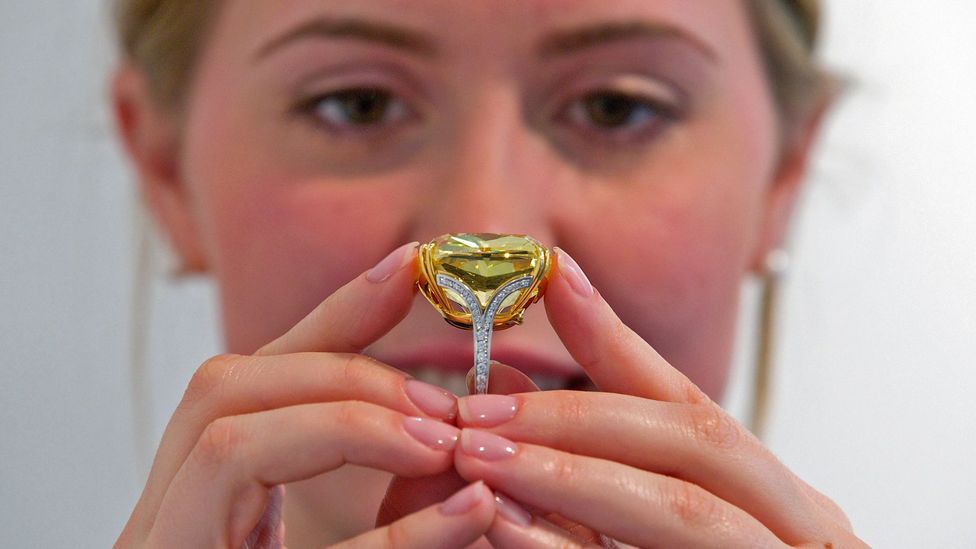 At 100.09 carats, the Graff Vivid Yellow, is one of the rarest yellow diamonds of its size. (Andrew Cowie/Getty Images)

At 100.09 carats, the Graff Vivid Yellow, is one of the rarest yellow diamonds of its size. (Andrew Cowie/Getty Images) 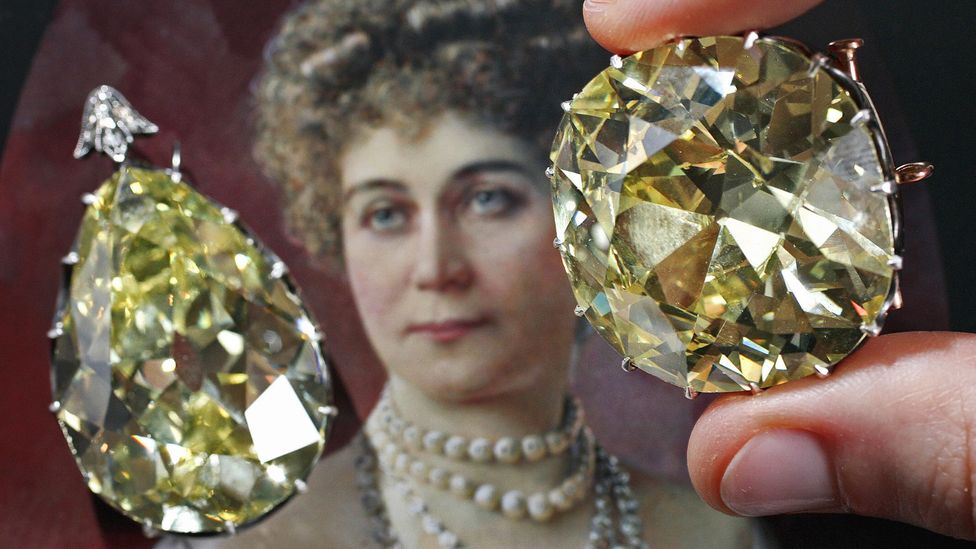 These yellow diamonds were worn by the celebrated courtesan La Paiva in the 19th century in Paris. (Fabrice Coffrini/AFP/Getty Images)

These yellow diamonds were worn by the celebrated courtesan La Paiva in the 19th century in Paris. (Fabrice Coffrini/AFP/Getty Images) 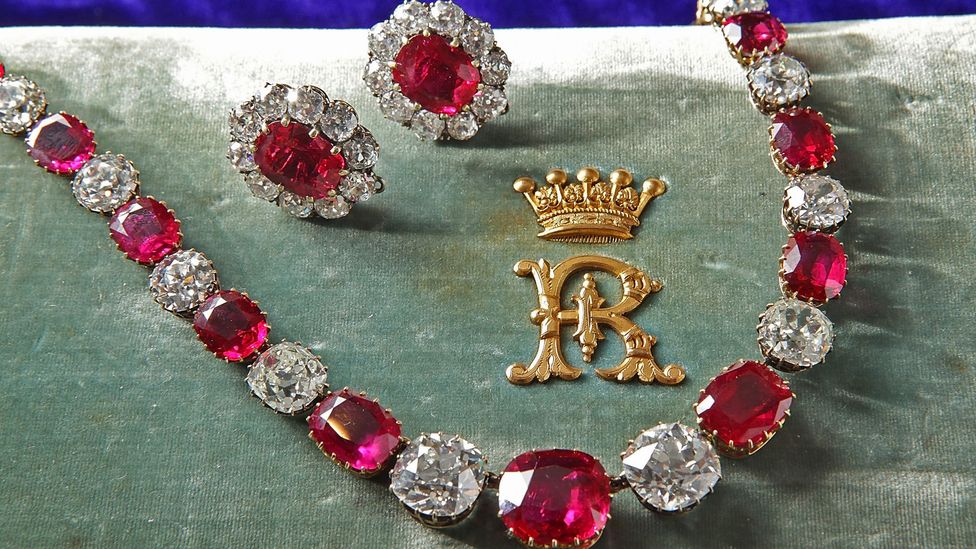