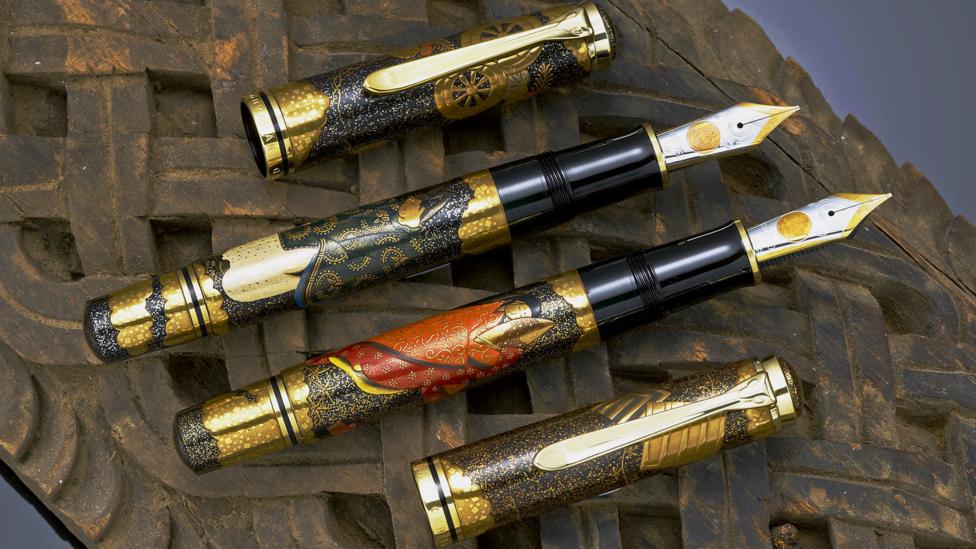 For some, it’s the sweet, earthy smell of the ink. For others, it’s the connection with history. But for Andrea Duni, his love of fountain pens comes from the physical ‘scritch’ of nib across paper and how writing with these instruments forces him to slow down.

“In the digital era it seems anachronistic but the ritual of choosing a pen, and the colour of the ink, then filling the pen, deciding which style to write in… it gives you time to think about what you’re going to write,” said Duni, a condominium manager in Cagliari, Italy.

Duni is one of thousands, perhaps millions, of people worldwide who love and collect fountain pens. Some seek vintage pens, from the late 19th century, while others are attracted to newer, high-end creations from brands including Montblanc and Dunhill. What unites them, however, is a passion for craftsmanship, details and yes, even functionality.

Duni chairs internet forums for enthusiasts like himself. While some collectors amass pristine, costly and desirable pens purely to admire, the 39-year-old uses his regularly.

Duni began collecting fountain pens in earnest after the introduction of the euro made it easier to join online auctions across Europe. He now has 100 different examples. He prizes pens of Italian manufacture — Stipula, Delta and Visconti — especially those with stub or italic nibs and piston-filling systems. He frequents three sites to find pens: thewritingdesk.co.uk, pens.it and stilografica.it.

Across the Mediterranean, Jeremy Collingridge, archivist of the Writing Equipment Society, is holidaying near Saint Tropez in France. At a village flea market he has just spent 700 euros ($893) on pens for his 2,500-strong collection. Bargains, sometimes requiring minor repairs, can be picked up from between $30 and $80, he says.

Although he sometimes makes a profit reselling, his gains are wiped out by buying fresh finds. “I’m particularly excited by lapis blue fountain pens. They’re made of celluloid but the pattern imitates lapis blue," he said. “You pick up one of these and your knees start to feel a bit strange. I get a physical reaction from the beauty of the object I’m holding.”

His treasures include a Parker Duofold DNA in red — of which only 100 exist — with a certificate signed by two great grandsons of company founder, George Safford Parker. Collingridge acquired it at the London Pen Show, which he co-organises; it is one of many shows in North America and Europe where pens trade briskly for several hundred dollars or less.

Online dealing is busy on sites such as eBay, though buyers can sometimes face disappointments such as fakes and broken pens.

“Some brands, notably Montblanc, are well known for being counterfeited," Collingridge said. Modern pens by well-known manufacturers are “where counterfeiters are the most active. In these cases — and especially if the price seems to be low — you should deal only with suppliers that you trust. With some counterfeit items it can take an expert to tell the difference.

“Vintage pens are much more difficult to fake because wear cannot be reproduced and the returns for the counterfeiter are generally not so great," he continued.

The most elite category of vintage pens, he says, are Dunhill-Namiki maki-e (Japanese lacquer). “The urushi lacquer barrels were painstakingly decorated with layers of fine gold dust and other pigments, in a process often requiring several months’ work by a master artisan,” Briggs said. “First-rate early examples are notoriously rare, and have traded hands for over a quarter of a million dollars.”

The history behind vintage pens attracts collectors such as Rahul Ganguly, a 30-year-old publishing house editor in Delhi. “When you’re using a pen with some history behind it, like my Second World War-era Sheaffer Balance, the mundane can often become extraordinary,” Ganguly said.

The Fort area in south Mumbai is a good hunting ground for restored vintage pens, particularly Parkers and Sheaffers from the Forties to Sixties, he says. And in Old Hyderabad, at the Sunday Antique market, finds can be made on the stalls near Patherghati.

Modern collectors are mainly interested in limited editions, according to Briggs. Of special interest, for instance, are skeleton pens — with metal lattices over translucent barrels, showing the inner mechanism — and also pens incorporating precious metals and gems.

Collingridge's 1996-issued limited edition Montblanc Alexandre Dumas is one such treasure. “It’s a barrel design with vertical golden ribbing between pearl and black acrylic. It’s absolutely beautiful. I just love it,” he said, noting that his pen bears a glitch—a gold-coloured signature belonging not to the younger Dumas, but to the elder French novelist. “I won’t say what I paid for mine but the mistake makes it even more of a rarity and therefore more valuable.”

How to care for it

Webinars such as offered by the Writing Equipment Society offer advice on basic repairs and tips for proper storage. Some celluloids, for instance, give off acetic acid and deteriorate. “They can also damage other pens around them,” Collingridge warned. “It’s very important to ensure that they are not kept in a closed space. They need to be away from damp and from sunlight. I recommend putting a carbon cloth under them because that absorbs dangerous vapours.”

Demand for fine and rare pens is currently oustripping supply, auction house Bonhams says. “A healthy number of younger collectors have entered the fold, perhaps seeking a more tactile, individual and authentic connection to the physical act of writing than is afforded by electronic devices,” says Briggs.

While Briggs encourages clients to buy what appeals to them, rather than with an eye to profit, he notes that canny buyers have been able to achieve handsome returns. For instance, a Pelikan Genji Maki-e Limited Edition 60 Fountain Pen Set by Musyu, originally sold for about $17,800 in 2002, recently fetched $27,500 in a Bonhams sale.

Looking to the future, interest in Namiki maki-e pens is ascendant, he said. Similar to wine connoisseurs, “it takes considerable time and dedication to become proficient in identifying superior Namiki maki-e examples and this rigorousness seems to appeal to serious pen aficionados,” Briggs said. 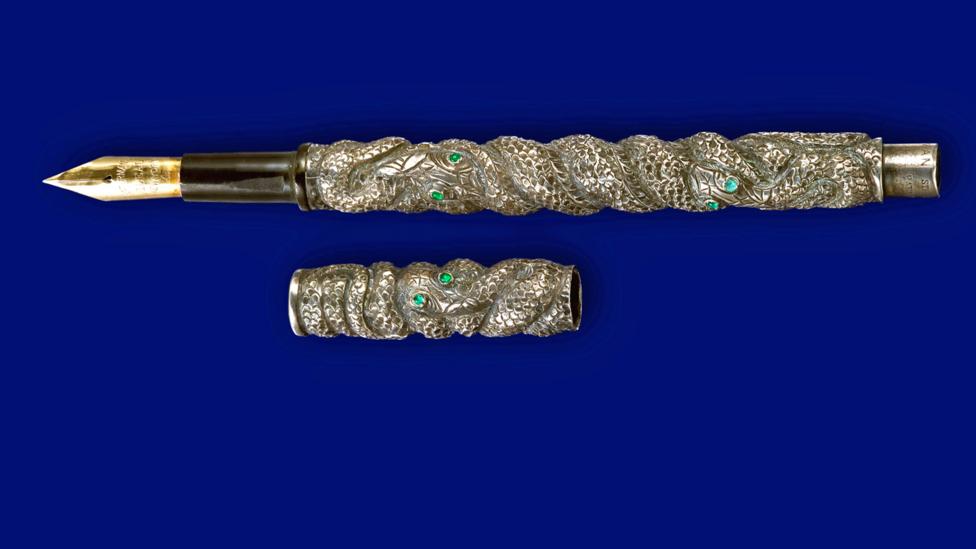 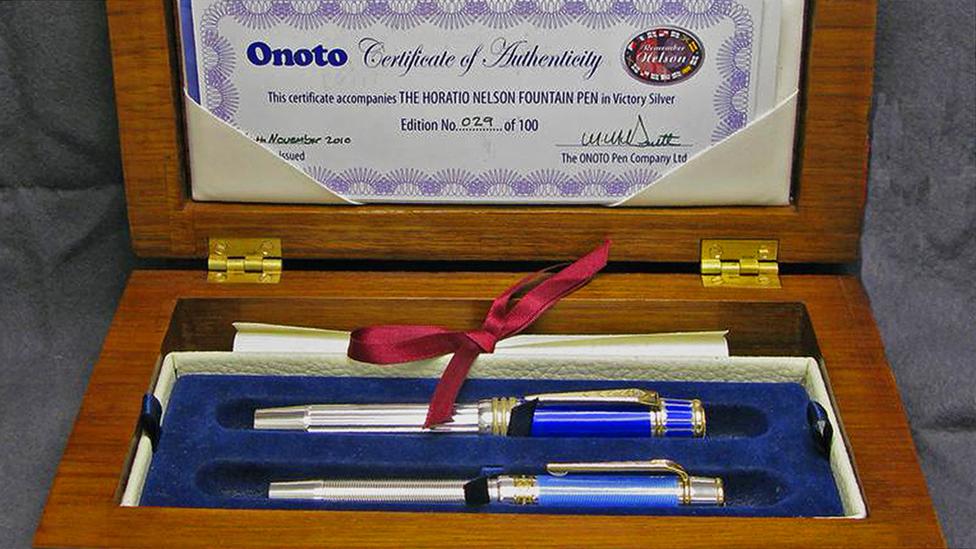 This handcrafted Horatio Nelson and Emma Hamilton set is coveted by many pen collectors. (Jeremy Collingridge)

This handcrafted Horatio Nelson and Emma Hamilton set is coveted by many pen collectors. (Jeremy Collingridge) 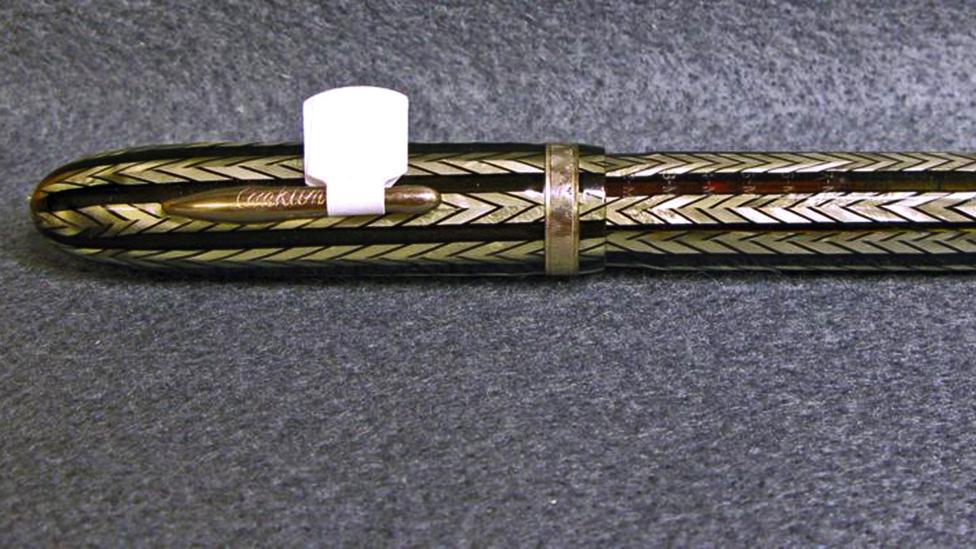 A Conklin Chevron fountain pen dates to the Golden Age of 1936 to 1938. (Jeremy Collingridge)

A Conklin Chevron fountain pen dates to the Golden Age of 1936 to 1938. (Jeremy Collingridge) 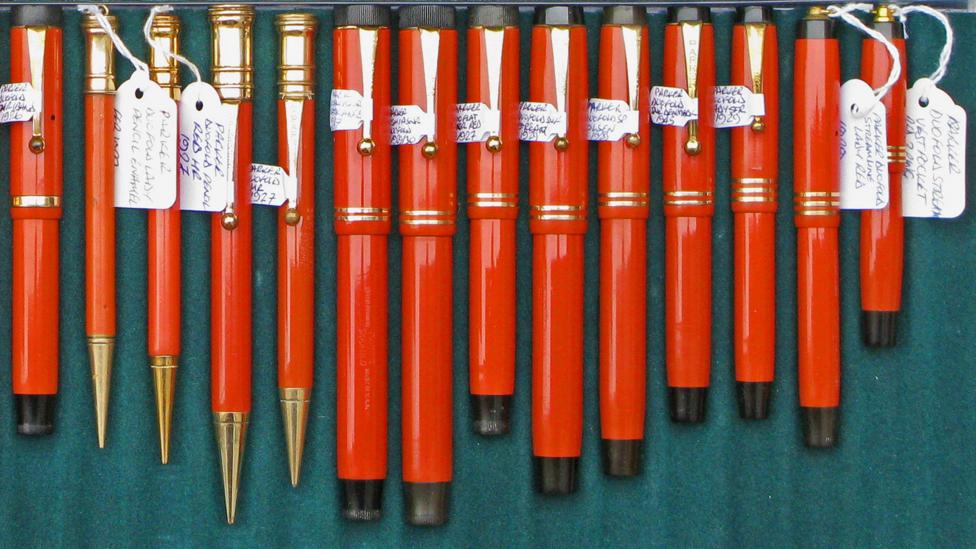 Pen collectors are serious about labelling and displaying their prized collection. (Jeremy Collingridge)

Pen collectors are serious about labelling and displaying their prized collection. (Jeremy Collingridge) 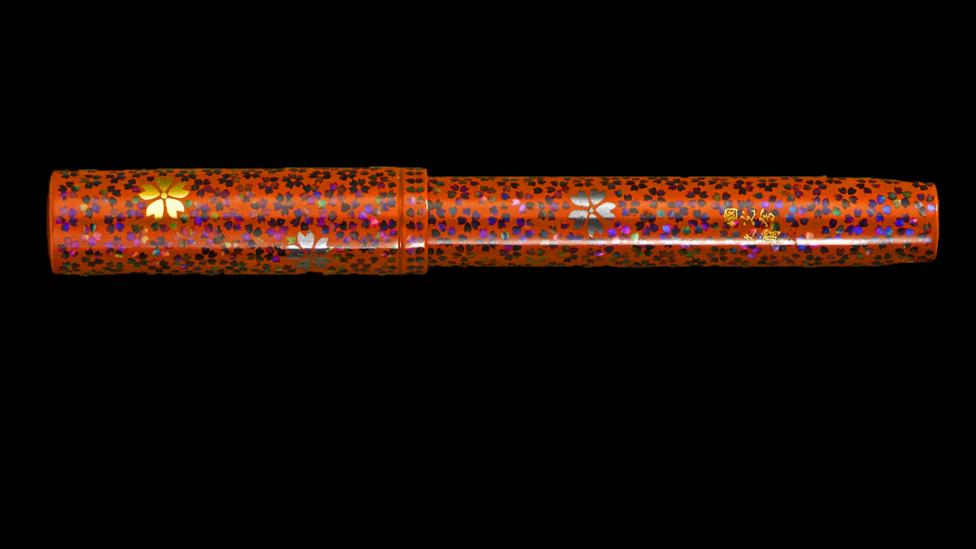 Layers of mother-of-pearl are embedded in urushi lacquer on this Namiki Sakura Maki-e. (Bonhams)

Layers of mother-of-pearl are embedded in urushi lacquer on this Namiki Sakura Maki-e. (Bonhams)

Japan’s oldest novel, The Tale of Genji, was the inspiration for this Pelikan Genji. (Bonhams)

Japan’s oldest novel, The Tale of Genji, was the inspiration for this Pelikan Genji. (Bonhams)