Ryan Schaffer watched the sun rise over the mountains of northern Portugal from the terrace of a refurbished medieval monastery. He sipped his espresso, took his time getting ready, then headed down to join his workmates for their regular morning meeting.

They chatted for a while before heading to various corners of the 15th century building with their laptops. It’s all in a day’s work for employees of San Francisco-based Expensify, a start-up specialising in the less-than-glamorous world of expense report management.

Every year the six-year-old company offers its approximately 50 employees the opportunity to be flown to a different country to travel and work for a month. Destinations have included Thailand, Vietnam, Croatia, India and, this year, Portugal.

“We spent a week in Lisbon, Porto, [in a] monastery called Pousada de Amares, an hour from Braga and Lagos,” explained Schaffer, the 27-year-old director of marketing and strategy at Expensify. The trip took people around much of Portugal.

There was, he said, generally no fixed place to work, with 35 employees scattered across various Airbnb lodgings, some with their partners and families. The trip also included nightly informal meals with colleagues and a weekly company dinner.

“People are sceptical when we say we work hard during our offshore month, but truly we work more that month than we do when we're back in the States,” Schaffer said. 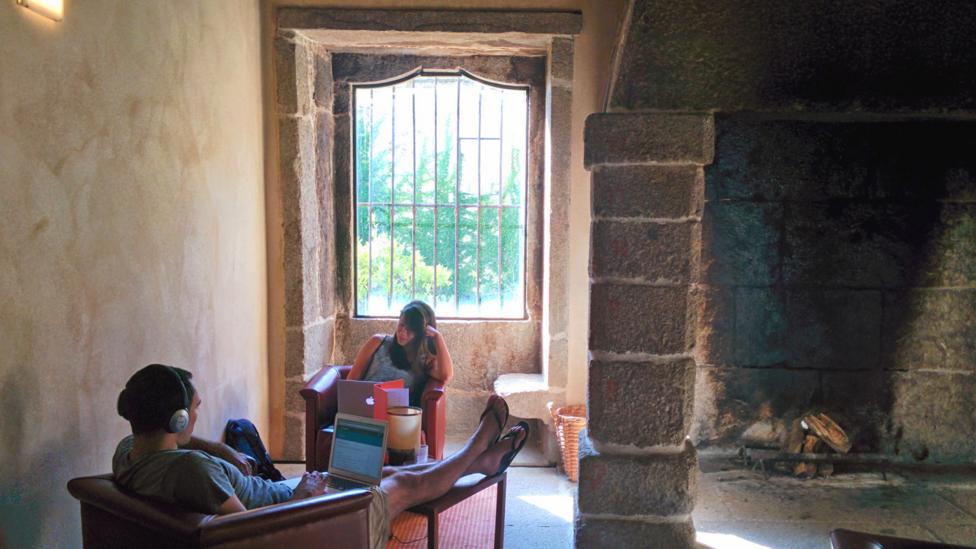 Working abroad, here in a castle, with colleagues is one Expensify perk. (Matt McNamara)

And that fact, some say, is the big secret around increasingly seductive workplace benefits.

The purpose of most of these perks is to make it unnecessary for people to ever leave their desks.

“This isn't because the companies are being generous,” said Gerald Ledford, senior research scientist at the Center for Effective Organizations at the University of Southern California’s Marshall School of Business. “The purpose of most of these perks is to make it unnecessary for people to ever leave their desks.”

Attracting talent with enticements like a constantly refreshed selection of gourmet snacks, refrigerators stocked with limitless free drinks, designer fitness classes, top-end ergonomic furniture, games arcades or, even, a “puppytorium” for workers’ pampered pooches has become the hallmark of cutting edge tech firms. And now, many corporations are copying the perks offered by the likes of Google, Apple and Facebook in order to capture the magic potion that has turned them into some of the most successful and profitable businesses in the world.

While company perks existed in other industries like banking and law before the tech boom, the latest battles in what Ledford dubs the “perks arms race” are being led by Silicon Valley where competition for the best software engineers, app developers and other technical talent is fierce. (See below for some of the most enticing perks being offered these days.)

“The easiest thing to copy is letting people bring their bird to work or offering yoga classes. But, those are things are really pretty tangential to how well a company like Google performs,” he said.

What’s more, it’s possible these enticements contribute to a growing culture of overwork.

“Many of these perks keep people at the workplace whether they’re being productive or not,” said Lotte Bailyn, professor emeritus at the MIT’s Sloan School of Management.

For instance, providing supper is an incentive to stay at work all evening. But are people still working at their best at, say, 20:00, after 11 hours of work, just because they’ve eaten a free chef-prepared meal?  Many people hit a wall, a moment when they’re not able to focus as clearly or are more prone to make mistakes. 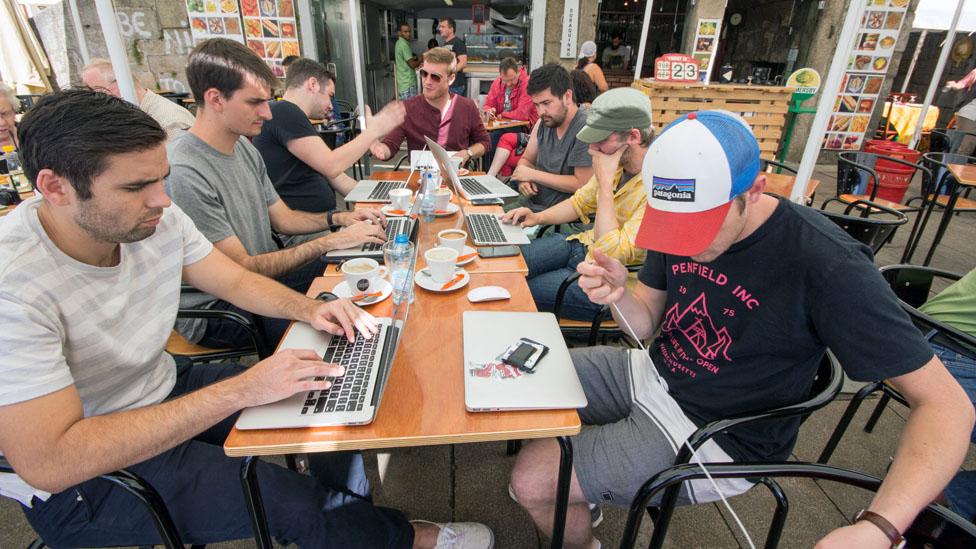 Expensify took employees to Portugal to work for a month. (Matt McNamara)

Research shows that overwork and all-nighters are bad for employees' health and add to the risk of accidents and mistakes. There has been less study of the economic returns for Silicon Valley tech companies, which encourage long hours.

Bailyn said even when workers are productive long into the evening, there is a price to pay for this emphasis on overworking. “That has a real social consequence because those are the same years that are optimal for starting a family and that affects not only women but also men,” she said.

One extreme perk recently introduced by Apple and Facebook recognises that problem. Sort of. Both will now fund egg freezing so women can delay child bearing. Apple said the benefit would empower women, while others have argued it sends the message that you have to delay having children in order to succeed in the workplace.

Of course, there’s also the question of whether companies really want to recruit people who are attracted to these benefits, above all else. “You're probably not getting a worker who is very driven to perform,” Dr Ledford said, if they are judging the job solely on the perks. Pay for performance still might be a more effective company investment for managers who really want to see a positive impact on profits and productivity, he said.

Perhaps surprisingly, the CEO and founder of Expensify David Barrett isn't a fan of costly perks either. He said employees pay their own board and lodging when offshoring. Expensify picks up the tab for the airfare and group events.

Instead, the company focuses on providing good salaries and equipment in the best office location, Barrett said. “We also give you the option of going on a crazy adventure to the other side of the world for a month every year.

Competition is intense for the best in the tech world, but also in other industries where over-the-top benefits are being offered. Here’s a look at some of the eye-catching perks some firms offer:

Employees of project management software company LoadSpring can receive a stipend of up to $6,000 plus an extra week of vacation to travel overseas and experience other cultures after they've worked for the company for two years.

If you've worked for data management firm Integrated Archive Systems for more than 12 months you're eligible for $10,000 towards the purchase of a hybrid car. The only catch is you'll have to hang on to it for three years.

Streaming music service Spotify has appropriately music-based perks, including instruments for all to use, recording studios in its New York and Stockholm workplaces along with live “office sessions,” which have recently included performances by Lily Allen, Kylie Minogue, Professor Green and Slash.

If you work for online service provider GoDaddy you can let off steam at its own adult-sized pedal go-kart track before sliding from the second floor into the dining area.

Every year, games company Valve flies all its employees and their families away for a week-long all-expenses-paid trip to a resort somewhere like Hawaii.

DPR Construction has bars in all 17 of its offices including Austin, Texas, which has a Western saloon. But, you'll have to wait until the end of the working day before you enjoy a refreshing cool one.

Online ticket company Eventbrite has a Zen Room where employees can meditate or get acupuncture.

Web address shortening specialist Bitly has a “Cocktails and Dreams” meeting at 16:00 every Friday. Each week an employee is selected to make their favourite cocktail for all their workmates. There's beer in the fridge, too.

NuStar Energy employees can use the company jet in an emergency.

Household cleaning giant SC Johnson provides a concierge service to save employees from boring tasks such as tracking down theatre tickets and booking their cars in for a service.