Loading
Women and Work
Keys to The Kingdom: The slow rise of Saudi women
Share using EmailShare on TwitterShare on FacebookShare on Linkedin 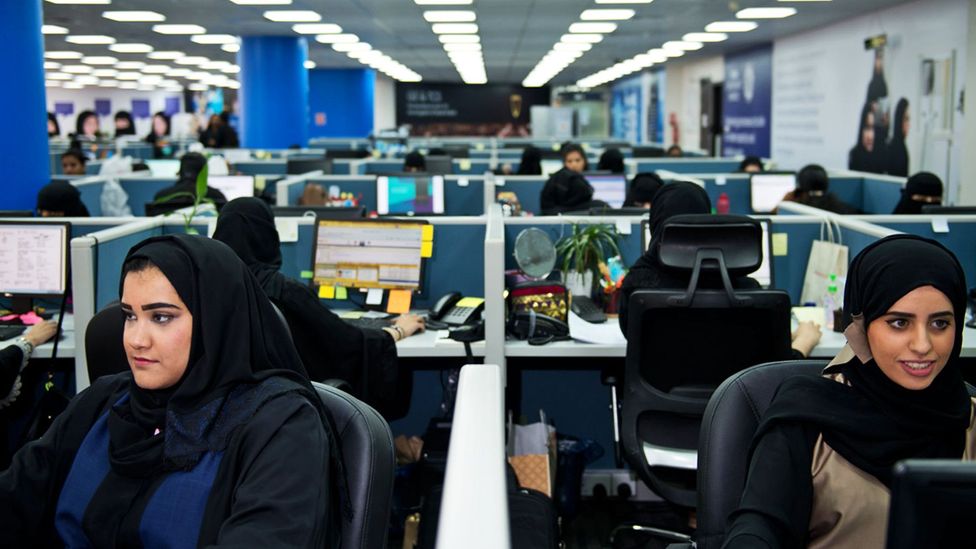 Things aren’t moving as fast as they should be, but they are definitely moving.

Editor's Note: This is the first story in a six-week series focused on women and work in patriarchal nations in the Middle East. In the coming weeks BBC Capital will look at entrepreneurs in Gaza, the divisions between female workers in the United Arab Emirates, women from the region who have found success in the West and more.

Change is coming, albeit slowly, for Saudi women.

For many years strict laws and conservative traditions have kept Saudi women out of the workplace. Some 60% of Saudi university graduates are female, but barely 15% of the Kingdom’s women have jobs.

Slowly, however, restrictions are loosening. The number of Saudi women employed in the Kingdom’s private sector grew from just 55,000 in 2010 to 454,000 by the end of 2013, according to figures from the Saudi Ministry of Labour.

This increase is credited to both campaigning by women and a series of reforms by the late King, Abdullah bin Abdulaziz, who during his final years in office accepted women onto the Shura Council (Saudi Arabia’s formal advisory body), appointed the first female vice minister and generally relaxed rules on the kinds of jobs women could do.

Saudi women are now permitted to work in retail and hospitality; the first Saudi female lawyers were granted their practising certificates in late 2013; and the Kingdom now employs women nationals for its diplomatic services. As well, females can now hold jobs as newspaper editors and television chat-show hosts.

“People looking in from the outside may see women being allowed to work in a shop as a trivial thing, but for women in Saudi Arabia, this was a very significant development,” Abeer Mishkhas, the London-based features editor for Saudi-owned Arabic language newspaper Asharqalawsat, told BBC Capital. “Things aren’t moving as fast as they should be, but they are definitely moving and we have seen a lot of changes in the past 10 years. Many new jobs and sectors have opened up to women where they could never have dreamed of working before.”

While female graduates are well qualified and many have wanted to work, they have lacked basic knowledge about the workplace. In many cases, they had never experienced mixing with men who weren’t family members, according to Khalid AlKhudair, the founder and CEO of Glowork, Saudi Arabia’s first recruitment agency specifically for women.

In a bid to bridge the gap between education and employment, Glowork in 2013 launched StepAhead, a now annual careers event connecting women to job opportunities and offering workshops on interviewing and building a CV.

From 45 employers meeting in Riyadh in 2013, this year’s event will be held in three cities — Riyadh, Jeddah and Damman — throughout April, and about 300 companies are expected to attend, AlKhudair said.

Hafsa Algead, a 23-year-old woman who graduated from King Saud University in Riyadh in January with a degree in English translation, has recently started working as an English and Arabic translator for the Dutch Embassy in Riyadh, after applying through Glowork. Algead, who believes she is the first Saudi woman to work in a European embassy in the capital, said her parents had encouraged her and were proud of her achievements.

“I had always wanted to work and it was a priority for me to get a job when I graduated,” she explained. “I wanted to make sure I could be independent and support myself. I have seen married women…with no way of supporting themselves if they want to get divorced.”

Algead said while she was at university she volunteered on the student committee, which led to part-time work in events organising and allowed her the opportunity to mix with men from beyond her family.

“Some women don’t like to interact with men who aren’t in their family, but for me, I don’t mind because I see it as only work and I treat men as just having different personalities,” Algead explained.

AlKhudair credited government reform and so-called Saudization programmes — which set quotas for how many Saudi staff companies in various sectors must employ in a bid to wean the Kingdom off its dependence on expatriates and reduce unemployment rates — for the opening up of the private sector to Saudi women.

“There have been a number of new laws and initiatives,” he said. “It’s being led at the moment by international corporates, but local businesses are also increasing their female workforces too.”

Under Saudi law, all women and girls are required to have a male guardian. That guardian can be their father, brother, husband, or even a son, and he has to grant the woman permission to do a range of things from travelling, working, marrying, divorcing, opening a bank account and having medical procedures. Different families apply guardianship restricts to different degrees.

Significant obstacles still remain for Saudi women who want to work outside the traditional sectors of teaching and healthcare.

AlKhudair said that his company has received complaints and threats from people who oppose Saudi women taking jobs.

“When we put women to work in supermarkets, people were not happy about it and I did start to wonder, what had I got myself into,” he said. “But I kept going because where there are challenges, I like to see opportunities. What is the point of educating women if they are not going to be able to go into work?”

“Transportation is a huge factor,” noted Steffen Hertog, an associate professor of comparative politics at the London School of Economics and an expert on Saudi labour reform.

“Women whose families can afford it have their own drivers, and some of the larger employers do provide transportation, but that’s not common, and it’s an added cost for any business,” he said. “Not allowing women to drive is a major roadblock to getting women into work.”

To give jobs to Saudi women without upsetting conservative values held by many families, who don’t want women mixing with men who aren’t relatives, some firms are creating female-only workplaces.

For instance, a new business processing centre in the Akaria district of Riyadh employs 500 Saudi women who provide finance and human resource services to a range of clients including global engineering giant General Electric, oil and gas firm Saudi Aramco and Saudi Telecom Co, among others.

The centre, run by Tata Consultancy Services, opened in September, 2014, and aims in to employ as many as 3,000 women.

LSE’s Hertog said surveys had shown that many women preferred a female-only working environment because they were concerned about sexual harassment and, more importantly, their families didn’t want them in a mixed workplace. But he questioned the economics of the concept.

“Having women-only workplaces can add a lot of costs for a firm because you need separate entrances, separate bathrooms, separate facilities etc, so I’m not sure on a large-scale they are a realistic option,” he said.

There has also been criticism that deliberately separating women from men in the workplace leads to further segregation in Saudi society and does nothing to improve social cohesion in the longer term. But companies that have tried it disagree.

“This is not about endorsing segregation, it’s about providing women with work opportunities in a good working environment to encourage them to seek employment,” Hisham Al Bahkali, president and chief executive officer for GE in Saudi Arabia, said.

“Saudis tend to be drawn to the public sector because of higher wages, job security and shorter hours,” he said. “That needs to change if the private sector is going to employ more nationals — men or women.”

Are more women really being hired? Hertog questioned the quality of employment statistics. He said that due to tough new government targets to employ more Saudis, some companies were taking people onto their books to meet Ministry of Labour requirements, but they weren’t necessarily requiring them to actually turn up to work and instead were simply paying them to satisfy quotas.

“That being said,” he added, “even if half the number of women they claim to be in work are in genuine jobs, it’s quite a significant growth.”

AlKhudair acknowledged there is still a long way to go before Saudi women have equality in the workplace, and while he is buoyed by the changes taking place, he cautions about false expectations.

“Everything has to happen systematically,” he said “You can’t overnight change a tradition that’s been embedded in our society for years and years, and expect people to accept it just like that.”

Mishkhas agreed. “You cannot compare the situation now to how it was before, but I think people from outside the Kingdom don’t see how much has changed. They focus still on what hasn’t changed,” she said.