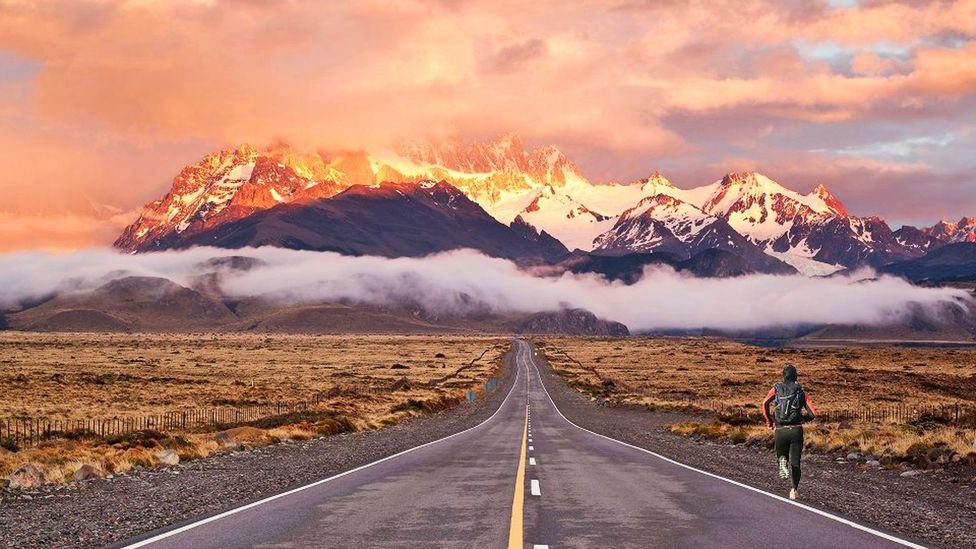 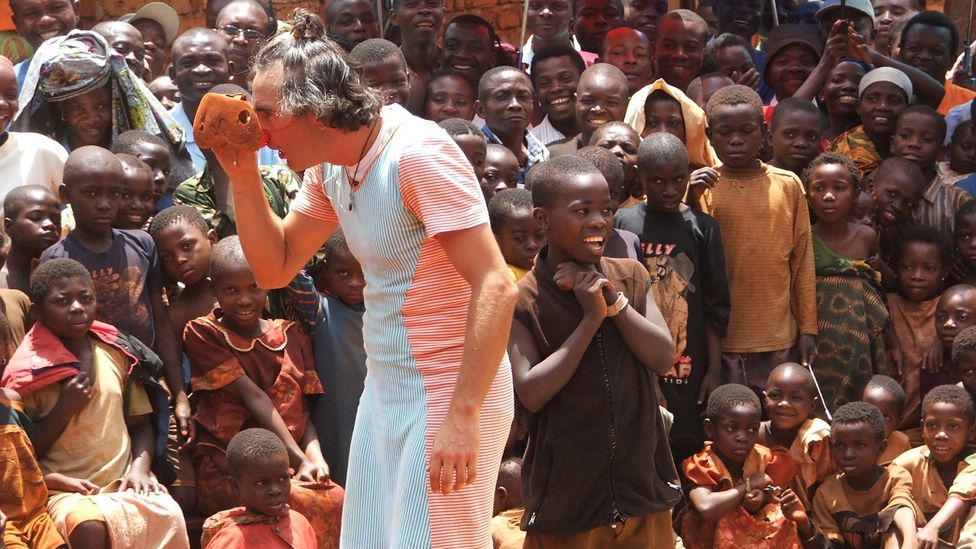 Clowning around the world

*Meet some of the small set of people who have travelled the world non-stop for the sake of a cause.* Eleven years, 82 countries, 143,000km and four bouts of malaria later, Alvaro Neil is still on his bike. He's still wearing his red nose and still performing clown shows in rural and poor communities the world over. The 47-year-old Spaniard, better known by his moniker Biciclown, quit his job as a lawyer in 2004 to dedicate his time to a project he calls ["miles of smiles,"](http://www.biciclown.com/) carting 55 kilos of clown and personal gear around the globe on two wheels. "After five years working in Madrid I realised life was too short," Neil said by phone from Bariloche, Argentina. "I was like a character in a movie, but I didn't like my script. So I said, 'let me be the director of my own life,' and I took that script and I wrote it again." Neil's new script includes some dramatic scenes, like in 2007 when the International Red Cross asked him to perform his 50-minute act in front of 2,000 people at a refugee camp in Tanzania. And then there's the time in 2011 when Neil happened to be in Japan when a tsunami hit, spurring the smile-maker into action. The bike-bound clown's personal savings fund 60% of his travels, while 20% comes from the five books and documentaries he's produced about the journey. A further 20% comes from sponsorships (though many of those disappeared after the financial crisis in Spain). Neil travels on an inconceivably paltry budget of about $300 per month and doesn't charge for his clowning performances, asking instead for shelter while he's in a town. Scroll through the images above for a look at others globetrotting for a cause. (Credit: Alvaro Neil) 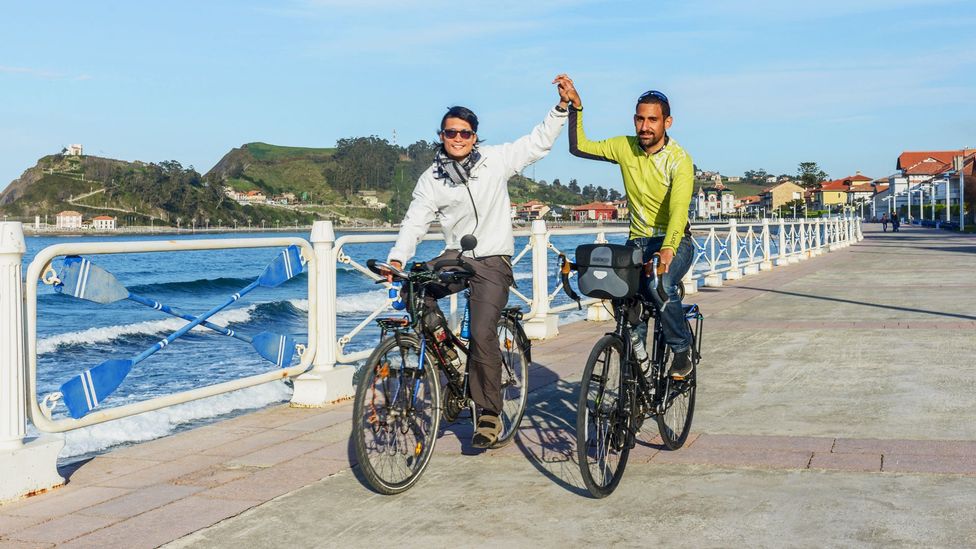 Biking forward for a cause

Hong Kong native Sean Yuen connected with Cuban American Ron Ibarra on dating website OKCupid two years ago. They first met in person exactly one year and three months later. Now, they’re biking across Eurasia on a trip called [Bike Forwards](http://www.bikeforwards.com/) that will take them from Spain all the way to Hong Kong. For 29-year-old Yeun, who has a masters degree in sports medicine and health science, the two-year journey is about contributing his skills in Chinese medicine to people in need along his route, as well as promoting his NGO, [Impact for Peace](http://www.impactforpeace.wix.com/officialsite), which helps send university students to India and Nepal for volunteer projects focused on female empowerment and child rights. “I didn’t want to be like most of my classmates who opened their own clinics and work six days a week,” Yeun explained by phone from Asturias, in Northern Spain. So he left Hong Kong in November 2011 on a 9-month service trip teaching Chinese Medicine in the Philippines and Thailand, and has been travelling the world (mostly by bike) ever since. Long-term travel is a newer possibility for 26-year-old Ibarra, who has just survived lung cancer. For him, biking 50km (31 miles) a day is a way to inspire others to push forward and realise that life goes on after hard times. “I came on this trip because I can do it now, and if I don’t do it now then I’ll get too comfortable,” said Ibarra, who recently quit his job as a graphics web designer for an architectural firm in Alabama, in the US. The couple survive on a meagre 7 euros ($7.50) per day, camping, cooking their own food, and taking advantage of websites like Couchsurfing and Warmshowers, where hosts offer free hospitality. They’ve secured several sponsorships for their equipment, and Ibarra works between 10 and 40 hours per month doing freelance web maintenance and data management projects to keep funds flowing. (Credit: Ron Ibarra)

Running to the end of the world

On 2 July 2013, Joseph Michael Kai-tsu Liu Roqueni set off from his home in Montreal on a mission to [“run to the end of the world"](http://www.runningtotheendoftheworld.com/). The 34-year-old long-distance jogger is currently in the midst of a trip that has taken him from Canada down to his native Mexico, and will soon continue on to the southernmost tip of Patagonia (pictured above in a promotional image). The (mostly barefoot) trans-America journey is not only an excuse to satiate a personal dream, but also an expedition to meet with youth across the continent and talk about education. “For me, a society that’s better educated is a better society,” Liu Roqueni said. The running advocate initially partnered with organisations like Pathways to Education, in Canada, and the Edible Schoolyard Project, in the US, but is now working on his own, visiting schools along his 18,990km route to talk about his expedition and the importance of education in our everyday lives. Liu Roqueni said he was just an average member of the varsity cross-country team at Montreal’s Concordia University when he graduated (a few years later than originally anticipated) in May 2013. But he wanted to challenge himself to “use the human capacities that we all have, not just in the body but in the mind.” “I’ve left everything behind and I’m putting myself in a situation where I kind of go back in time to the beginning, back to the basics where I’m worrying about where I’m going to sleep, what I’m going to eat and when I can take a shower or rest,” he explained. With a tight budget of about $1/km and the help of several lucrative sponsorship deals (including the Mexico Tourism Board), Liu Roqueni has been able to finance the trip on about $1,000 a month – although he occasionally relies on credit cards to get by. He is not sure how long it will take to reach the tip of South America, but plans to run between 20km and 30km each day until he makes it there. (Credit: Joseph Michael Kai-tsu Liu Roqueni) 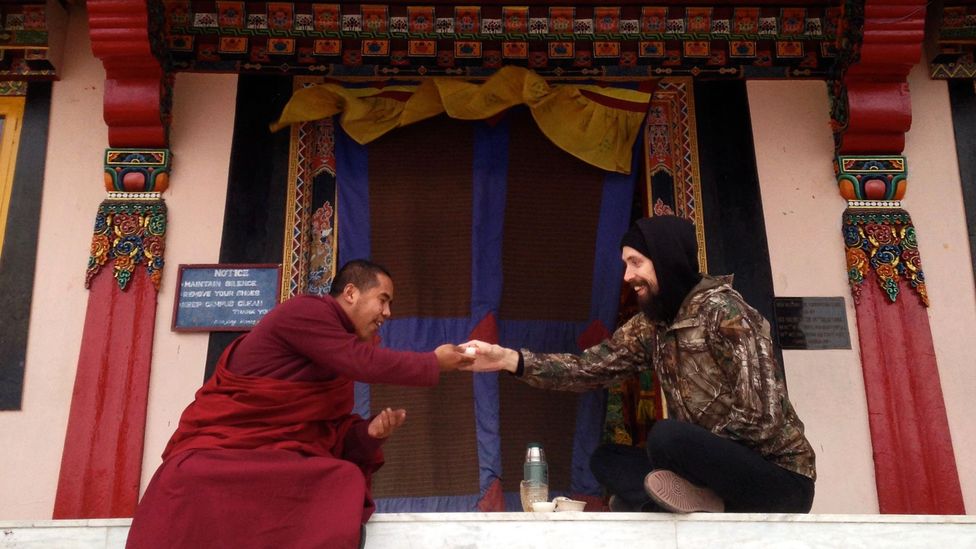 On a mission for tea

Jody Beavers, 32, always had a deep passion for tea. He worked in teashops for the better part of the last decade and launched his own company, Tap Twice Tea, in San Francisco two years ago. But even so, he felt there was a gap in his understanding of the product. “I’ve talked about tea a lot – about the process, where it grows, where it’s from, what the farmers are like, what the bush is like, what the weather is like – but I haven’t spent a whole lot of time walking through the fields and plucking the leaves myself,” Beavers explained by phone from southwestern China. “So I decided to take time to travel through the main tea areas in the world, see how tea is done and meet the people behind the product.” In part, the cause is to better understand his business and improve the way he works. It’s also about building relationships with small batch tea farmers and helping them create community development projects in their regions that provide living wages to those who had been unable to find viable work. Beavers set off on his [“Tea Mission”](http://www.taptwicetea.com/) from Kolkata to Kyoto in February. The trip cost about $5,000 in total and will conclude by June, but Beavers thinks it’s a worthy investment. He plans to repeat the mission each year to source better quality, sustainably grown loose-leaf teas that he can distribute to his growing network of US buyers. “As we continue to grow as a company, I feel much more comfortable saying ‘we carry tea from this farmer. I know his name, I know his family, I stayed on his couch’,” Beavers explained. (Credit: Jody Beavers) 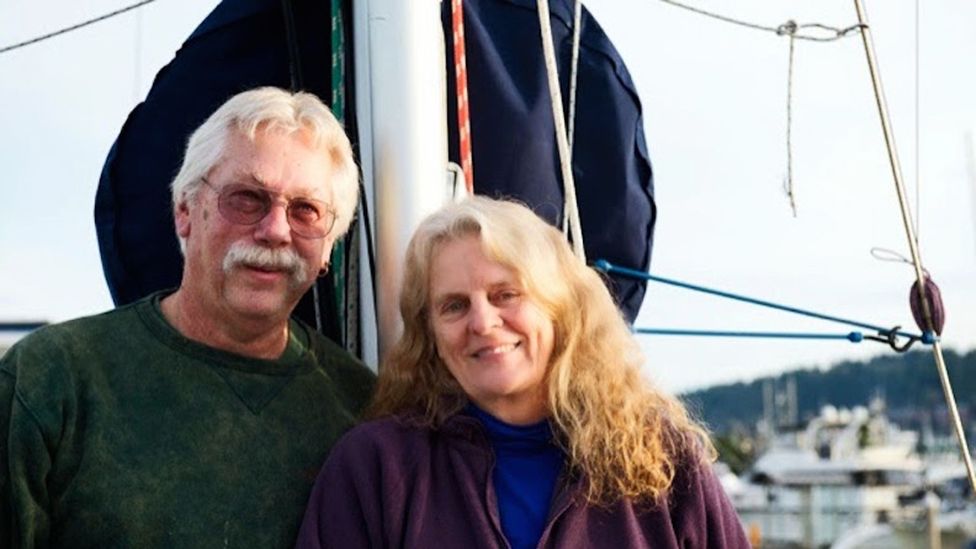 Sailing for the environment

Ginny Malmquist, 68, was diagnosed with macular degeneration (an eye disease that causes vision loss) at roughly the same time she decided to retire from her job as a school counsellor and private therapist in Bellingham, Washington, in the US. An avid sailor, she’d always wanted to circumnavigate the globe, but was afraid that if she waited for her husband who is 11 years younger, to retire, she wouldn’t have the vision left to do the journey. After reading an article in a sailing magazine about the Blue Planet Odyssey (a rally of sailors engaging in climate change research under the auspices of UNESCO’s Intergovernmental Oceanographic Commission), the couple decided to seize the opportunity and set sail on a three-year voyage aboard SV Heron Reach, a 40-foot retro-fitted sailboat. “We have both been passionate about the environment since long before we met in 1999,” Malmquist wrote in an email from Nuku Hiva, the largest of the Marquesas Islands of French Polynesia. “Our intention is to sail around the world, visiting some of the most challenged places and using the journey to raise awareness.” Before setting off from Bellingham in January, the couple gave presentations in several schools to educate children about the effects of climate change and help them brainstorm everyday ideas for combating the problem. Hundreds of them are now following the blog [Heron Reach Odyssey](http://www.heronreachodyssey.blogspot.com) as the couple travels the world participating in oceanographic and meteorological projects. Washington-based Samson Ropes has partially sponsored the sailing, and Malmquist and Schuster are using their retirement money to fund the remainder. By the time they return three years from now, they hope to have helped deploy a number of autonomous scientific instruments in remote ocean areas that will gather vital information on parts of the world where hard data is rarely collected. *To comment on this story or anything else you have seen on BBC Capital, head to our [Facebook](www.facebook.com/BBCCapital) page.* (Credit: Ginny Malmquist)