At face value, Bangkok shouldn’t be a great place for an expat assignment.

The threat of political instability is the highest in the region, next to Indonesia. The Thai economy continues to be outshined by neighbours: growth projections for this year have been revised downward due to anticipation of falling exports sales. And last August, a bomb at the Erawan shrine in central Bangkok killed 20 and injured more than 120.

Monetary bribes are commonplace, there’s an infamous sex industry and political unrest is an ongoing concern.

Still, many new arrivals try to overlook the more unseemly elements of life in Bangkok: “Monetary bribes are commonplace, there’s an infamous sex industry, and political unrest is an ongoing concern,” said Lauren Carey, a 29-year-old American who first came to Thailand in late 2014 as an English teacher. Many expats try to overlook the more unseemly elements of life in Bangkok, like its sex industry. (Credit:Quynh Anh Nguyen/GettyImages)

“But every country has their issues, my own included, and I feel no less safe here than I did in the US where I was a block away from the Boston Marathon bombings. Ultimately, the pros simply outweigh the cons,” said Carey, who now works as a franchise-development manager for real-estate firm Coldwell Banker. She says in Bangkok, the cost of living is lower and quality of life is much higher than in Boston, her previous home.

Indeed, relative to the regional financial capitals of Singapore, Hong Kong and Shanghai, Thailand is more affordable and it is easy for expats to set up and find accommodation, according to HSBC’s 2015 Expat Explorer Survey. “Thailand is a strong option for expats keen to get on the property ladder,” said Dean Blackburn, head of HSBC Expat. Thai law allows foreigners to outright own condominiums, but there is a slight snag. Foreigners can own only 49% of the building, a statute that rarely affects Bangkok residents but serves up a potent issue in southern islands such as Koh Samui where foreign buyers often outnumber Thai buyers. 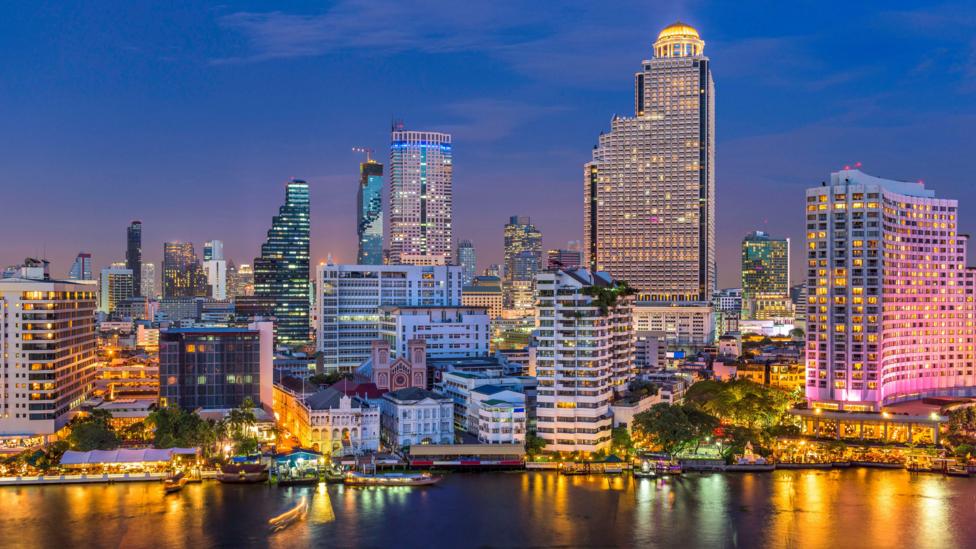 Bangkok, relative to the regional financial capitals of Singapore, Hong Kong and Shanghai, is more affordable for expats, particularly for housing. (Credit: Alamy)

Bangkok boasts a healthy condominium market, in which prices climbed 14% last year, according to the Bank of Thailand. The average cost to rent a one-bedroom flat in the centre of Bangkok is 21,000 baht ($600), according to Numbeo, an online research database. To buy a similar apartment would cost about 13,754 baht ($391) per square foot.

Expats prefer to live close to a BTS (train) station, the preferred public transit of commuters in the city. Some of the most popular locations for expats to live include the upper and lower Sukhumvit Road areas — such as Ekkamai and Thong Lo — the Silom area in the south along the Chao Phraya River, and Phetchaburi Road in the north.

Thailand is a strong option for expats keen to get on the property ladder.

However, Zurich-born Adam Taugwalder, CEO of Coldwell Banker Thailand, warns that prices in the Kingdom aren’t as affordable as they used to be, with condo prices rising steadily from increasing land values and developer renovations and high-end new builds.

Property isn’t the only draw. “Besides trade and commerce, people also come here for one of the leading food scenes, a thriving shopping hub [and] a growing art scene,” Taugwalder said.

Thailand has long held a regional cachet as a creative tech hub. But the world took more serious notice when 500 Startups, a seed capital investment company, announced in early 2015 that it would be opening up a $10m micro-fund in the Kingdom to forge access to the rest of Asia.

“The start-up scene in Thailand is exploding, backed by ever-improving infrastructure,” said Wladimir Baranoff-Rossine, founder of MobiCart, a British mobile-commerce company and founder of Bangkok-based AgentDrive. As well, “for $1,400 [a month] you can hire a very experienced westerner in Thailand, which would cost you five times that in the UK.”

In comparison, a typical Thai account manager with less than five years of experience can earn up to 30,000 baht ($853) a month, according to Adecco’s Thailand Salary Guide 2015.

Uber and Google have large and growing offices in the Thai capital.

International firms are attracted to Bangkok for its infrastructure and connectivity, Baranoff Rossine said. Plus, there are low barriers to doing business, such as one of the fastest procedures to register a company in Asia, which allows for insurance coverage and legal protection.

Breaking into the tech scene with an expat package sponsored by multinationals based in Bangkok, however, is a competitive affair. Uber and Google have large and growing offices in the Thai capital.

Beyond the tech fold, multinational accounting and auditing firms PricewaterhouseCoopers and Accenture have large presences in Bangkok; PepsiCo’s regional headquarters is also located here, and major advertising firm J. Walter Thompson has a sizeable and diverse team in the city too.

The ruling Thai military junta has issued restrictions on visa runs, slimming the once highly flexible visa regulations that allowed foreigners to make short trips to extend their stays. Moreover, visa extensions — once largely used by expats on prolonged trips — have been greatly curtailed.

Still, most foreigners that choose to base themselves in Bangkok will get their work permits sponsored by companies. The Ministry of Foreign Affairs runs a Facebook page that regularly responds to inquiries about visa applications.

Bangkok is world-famous — some could say infamous — for its nightlife. Besides getting lost down streets with no-name bars or slinging your body through a silky rooftop lounge, there are plenty of activities to fill downtime that don't involve regret-laden hangovers.

Besides getting lost down streets with no-name bars, there are plenty of activities to fill downtime that don't involve hangovers.

Hiking is a popular pastime among expats, and the city has a club dedicated to trekking. Ever the home of restless artists, Bangkok boasts a lot of creative clubs, such as numerous organisations solely dedicated to photography. 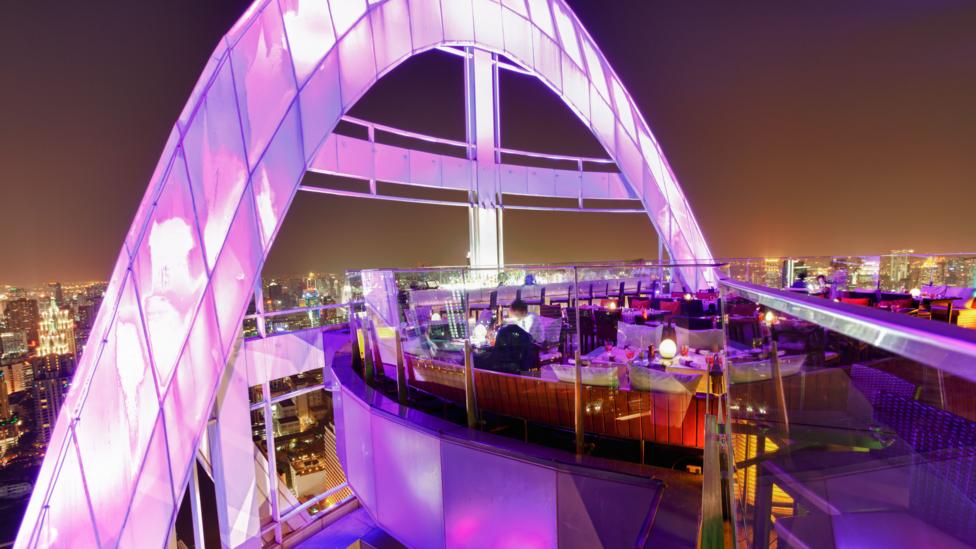 Bangkok is infamous for its nightlife and many rooftop bars. (Credit: Alamy)

Not convinced you can escape the pull of cold Singha beer? Then the Bangkok chapter of Hash House Harriers is for you, an international “drinking club with a running problem” that meets every weekend.

Thais are proud people, foremost because of the oft-boasted fact that ancient Siam was the only Southeast Asian nation not to be colonised by a Western power. The French — from which the Thai word for foreigner (farang) is derived —waged war with the country, but didn’t succeed in annexing it.

The result is that the core of Thai culture has very much remained uninfluenced by foreign powers — that is, until the arrival of modern commerce. Thailand’s King, the longest reigning monarch in the world, is the undeniable adhesive of a culture that is steeped in old-world hierarchy, which is reflected in the language. 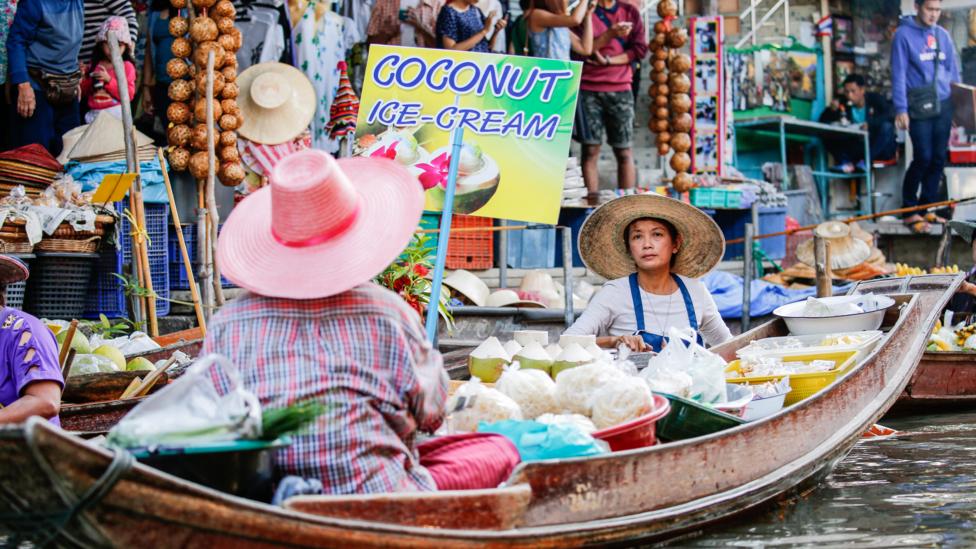 For a day trip, Damnoen Saduak, about 100km southwest of Bangkok is the most famous of Thailand's floating markets. (Credit:Isa Foltin/GettyImages)

For many foreigners, Thai is a struggle to learn, not only because of its richness in tonal words and Brahmic script, but also due to its extensive use of words that communicate vocalised emotions and politeness. But not to fret: Most foreigners get by living just fine in Bangkok with only a minimal amount of Thai because most Thais are forgiving with outsiders who try to speak their language. Plus, due to the importance of tourism, Thais that work in jobs that require constant contact with foreigners learn to, at minimum, understand basic English.

Many expats choose to base their families in Bangkok for the schools and access to first-world amenities, said Daved Forde, an associate professor at Stamford International University in Bangkok.

Forde moved to Bangkok from the US 23 years ago. His Canadian wife gave birth to two children in Thailand, both of whom attended international schools in Bangkok.

“[Education] is a primary motivator for many expat families who come here on a company package,” said Forde. “The focus on the International Baccalaureate (IB) programme makes Bangkok a great choice.” 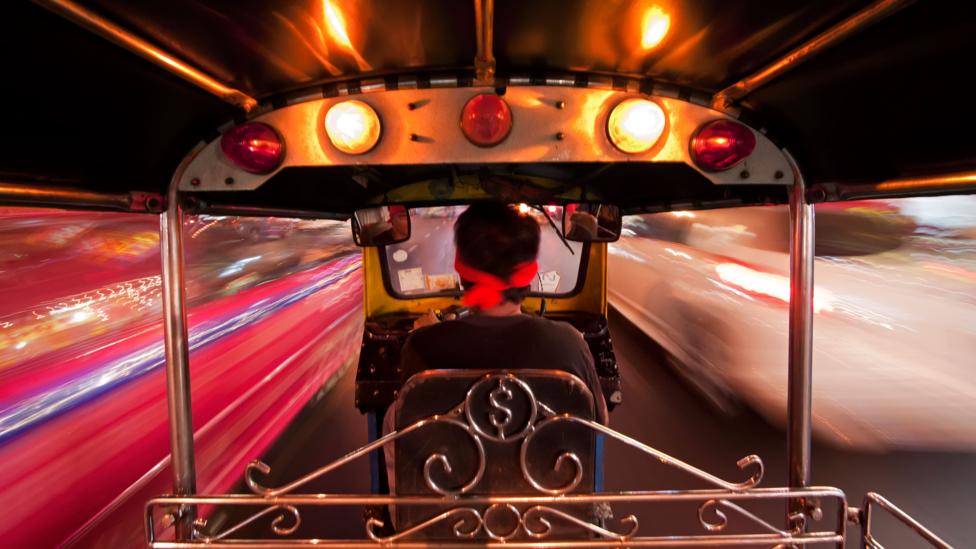 Most foreigners get around just fine in Bangkok with only a minimal amount of Thai. (Credit: Alamy)

Lauren Carey, like many other young professionals in Bangkok, is more concerned with Bangkok’s social scene than shopping for international schools. For her, the prospect for a future in Thailand isn’t out of the question.

“My plans are completely open-ended. I feel that I still have a lot to gain from this country in terms of my career, and have not even scratched the surface of the travelling I would like to do around the region.

“Five years ago, I’d never have imagined myself in Southeast Asia, but I’m here because I see the potential. I'm enhancing my career in a region that is on the rise, connecting with people from all over the world, and enjoying a balanced lifestyle with less stress. I have no doubt I've become a better person for it.”

Editor’s Note: This article has been updated to correct an error. It incorrectly stated that Harrow School and Shrewsbury International School offered the International Baccalaureate programme. They offer the IGCSE and A Level programmes.